This bottle was sold to me by the guys at Cotteridge Wines back in April I think so it has been earmarked for the @BeerOClockShow #12BeersOfXmas since then.  I can't remember how much I paid for it but I think it was about seven quid which probably isn't bad for a 660ml bottle at 10.0% ABV.  This is a collaboration brew between two London craft brewers - Weird Beard and Brodies - and the clue to that is in the name of the beer.  I didn't really need any persuading to buy this as I love nearly everything from Weird Beard and I have had some very good bottled stuff from Brodies too in the past.  The two head brewers have known each other since before they were brewers so a collaboration seemed a logical step.  Galena and Chinook hops were added to the malt before lactose and maple syrup went in. 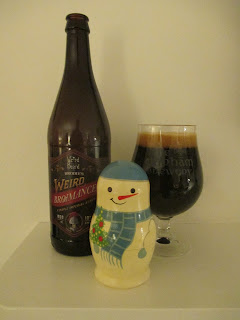 I do find stouts with lactose in to be too sweet so there does need to be a balance.  This beer obviously manages to do that.  My wife is not a fan of imperial stouts and described it as a cross between marmite and HP sauce.  Let's give some balance then.  It has a lovely dark head that has settled over the blackness of the beverage.  It is rich and thick and there is an initial sweetness but that is soon balanced by a lovely warming spiciness.  There is some roasted malt characteristics giving some bitter coffee notes.  I can certainly detect the maple syrup notes too along with coffee and vanilla.  Plenty of complexity and warmth with this one and I am going to savour every single drop of the 660ml within.  This could well have won my collaboration of the year if I had consumed it earlier but it will be a contender for next year for sure.