For day three of the @BeerOClockShow #12BeersOfXmas I make my first excursion to foreign parts and I could not go much further.  8 Wired Brewing Co are based in New Zealand and they began as a contract brewery in 2009.  I think the modern term is a gypsy brewer and in their first five years they brewed at four different breweries.  Despite this they have won many honours beginning with the highest award in New Zealand of champion brewer in 2011.  For the past four years they have been the only brewer from the southern hemisphere to appear on the ratebeer.com list of 'top 100 brewers'.  After a few years of roaming they now have their own brewery in Warkworth, north of Auckland.  I don't normally have too many hoppy beers over Christmas but this Double IPA caught my eye when I visited the excellent bottle shop in Southampton, Bitter Virtue.  It did cost £6.20 but it had a long way to come and I'm sure it is packed with plenty of expensive hops. 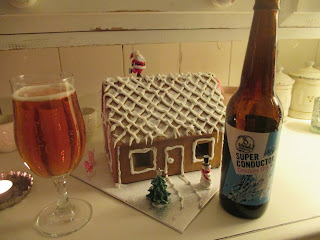 Super Conductor IPA (8.88% ABV) is packed full of New Zealand and Aussie hops and when I say packed I mean packed.  There is still a good sweet malty base to it which comes from a blend of four malts which tries to keep the hops under some sort of control but it is a losing battle at the end of the day.  There is a resinous quality to this beer that I love.  Very rich and satisfying but with a dry bitterness in the finish.  I could drink this down very quickly which at nearly 9.0% ABV could prove to be a mistake.  Probably a good job I only bought a single bottle of it then.