It's Christmas Day and that means we are at the halfway stage in the @BeerOClockShow #12BeeersOfXmas.  Christmas has finally arrived so it is time to bring out the heavyweights.  Big bottles, big strengths and, hopefully, big flavours.  It is tradition for me to drink a beer from Durham Brewery on Christmas Day.  I love their beers so much and their stronger brews have such great depth and complexity I find they are perfect to enjoy alongside all the festive food.  Imagine my delight then when I saw this particular bottle for the princely sum of £14.99.  I've never paid this much for a bottle of anything before. 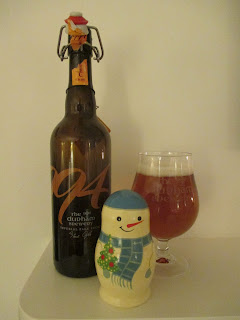 This beer was brewed for Durham's 20th anniversary, hence the name 1994, which means it has been aged for 18 months.  It is described as an imperial pale stout and at a strength of 10.2% ABV it should pack a punch.  It is a 750ml bottle so the punch should be long lasting too.  It has the addition of pink peppercorns and orange peel.  I've never come across a beer with peppercorns that I have been enamoured by so I knew this was a risk.  I don't want to drink anything from Durham that will leave a bad taste in the mouth.

The bottle is stoppered and I did cool it in the fridge for a hour before opening.  Durham beers are notoriously lively and I find this helps.  It did give a nice pop and nothing exploded.  It poured a nice golden colour and the aroma was not strong.  There were hints of orange there though.  There are similarities in the taste to their magnificent white stout, a beer I love.  The extra strength is noticeable as it warms all the way down.  A complexity of fruits and spicy hops are to the fore and at the end there is quite a peppery kick in what is a nice dry bitter finish.  To be honest I would have enjoyed it more without the peppercorns perhaps but it does leave a nice tingling sensation on the palate.  The orange peel is not so apparent in the flavours which was also a slight disappointment but overall it is a damn good beer from a brewery that will always be a firm favourite of mine when it comes to bottled beers.  Not their best but still one to savour and I do have a lot of it to savour.  Should keep me quiet tonight.