It's Christmas Eve and so I am in my home county of West Sussex today.  Andy Hepworth was Head Brewer at King & Barnes from a young age and when this excellent brewery was tragically shut following the takeover by those Dorset vandals Hall & Woodhouse in 2000, Hepworths was born and production began in 2001.  I was living in Horsham at the time of the closure and for me it was a very sad day.  I even got to go on the last ever brewery tour when we were charged with the task of drinking everything that was there.  King & Barnes Festive was my favourite tipple but they did a wonderful Old Ale and a superb xmas ale too.  Hepworths have carried on the tradition of the K&B Old Ale with their lovely Classic Old.  I am hoping this festive beer carries on the tradition of the K&B xmas ales. 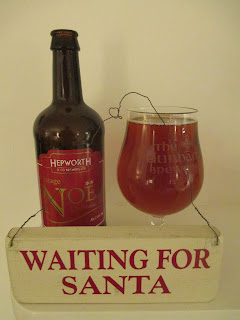 The beer pours an inviting deep golden colour.  A little lively but I managed to retain all of it due to a speedy pouring job.  My wife thought it was a bit tasteless which doesn't bode well although she did say it was very warming which indeed it is.  There's a strong sweet malty base and a bit of a spicy tang in the finish.  I was wanting a richer, boozier smoothness with hints of rich fruits with a spicy hop character.  Not sure why I was expecting this but I guess I was thinking back to the old K&B Xmas Ale.  For a 7.5% ABV beer it is a little lacking in flavour really.  Too much malt character for me.  It does warm you up though and it is pleasant enough but doesn't hit the heights of my first four beers.

As a footnote to all this Hepworths are moving to a larger, spanking new brewery to the south of Horsham in 2016.  This new brewery will have three times current capacity and it should be operational in April.  I will be sure to pay them a visit once they are up and running.