We're getting to the end now of the @BeerOClockShow #12BeersOfXmas for this year and this is the first of two successive Belgian beers and the third one overall.  Belgian beers are gorgeous to have at Christmas.  The story behind Brasserie d'Achouffe begins in the late 1970s under the control of two brothers-in-law, Pierre Gobron and Chris Bauweraerts.  The first La Chouffe was produced in 1982 and things went so well they decided to go full-time with the project.  In 2006 the brewery became part of the Duvel-Moortgat brewery but the brewery, set in the Belgian Ardennes region, has been retained and invested in.  This particular beer was picked up at the Hogs Back Brewery shop for £7.75.  It is 8.0% ABV and is another large 750ml bottle so plenty to get my teeth into. 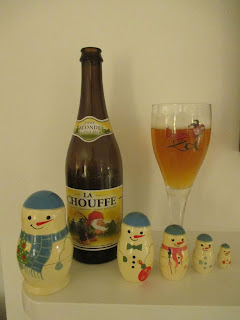 The beer itself is slightly fruity with notes of lemon, gently spiced with hints of coriander and has a lovely bubbly mouthfeel.  It is unfiltered and refermented in both barrel and bottle.  It doesn't set the world alight in the way the Belgian tripels do for me but it is a fabulous beer nonetheless.  I even brought the whole snowman family into the picture for this one although they really should be gnomes as that seems to be the brewery symbol.  Now time to complement this beer with some cheese and biscuits I think.