As it's Christmas I will stay in Belgium for one more beer.  Brouwerij St Bernardus have been busy brewing abbey ales since 1946.  They use hops from their very own hopfield next to the brewery, located in the West Flanders village of Watou.  The story is the coming together of two trappist monasteries.  The first of these was a group of French trappist monks who moved just across the border into Belgium to establish a cheese factory,  The monks went back to France in 1934 but the cheese factory stayed under new ownership.  In 1946 the monks of trappist monastery St Sixtus in Westvleteren were looking for someone to brew their beer.  They gave a license to the cheese factory and Brouwerij St Bernardus was born.  Westvleteren supplied the brew master, the know-how and the St Sixtus yeast strain.  The license agreement concluded in 1992 and they continue to brew the same beers to the same recipes under the St Bernardus name.  This particular beer was purchased at Bitter Virtue in Southampton and is another large 750ml bottle and was priced at just under a tenner. 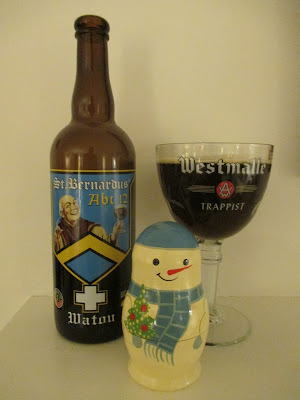 This 10.0% ABV beer is a Belgian Quadrupel and I think it is the first one I have tried of this particular style.  I have had plenty of Dubbels and Tripels so it is about time I took the next step up the scale.  The aroma gives the promise of rich dark fruits.  My wife thought it was superb and has strong resemblances to barley wine.  Rich, warming and fruity with a smooth malty backbone.  Plenty of complex flavours appearing.  Vinous, raisin, plum and all the sort of things you expect from Christmas cake and pudding.  It is a really stunning beer and this won't be the last Quadrupel to pass my lips of that I am certain.  Time to get some more cheese to accompany this one.