My first Belgian beer of my dozen was purchased from Bison Beer in Brighton.  I am assured I will not be disappointed,  It is a Belgian tripel, my favourite Belgian beer style so I have high hopes.  The De Haave Maan brewery is located in the beautiful city of Bruges.  The brewery dates back to at least the 16th century but the story of ownership by the Maes family begins in 1856 when Leon Maes (who became known as Henri the first) became the owner.  The Straffe Hendrik was developed in 1981 by Veronique Maes and her father Henri IV.  However the brand was acquired by another brewery in the late 1980s but in 2008 it was brought back home.  With recent investment it is now a state of the art brewery with a bottling plant and tavern.  The future is looking good. 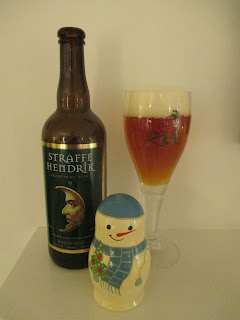 The beer is looking good too.  A lovely golden colour with a lovely white head with the trademark aromas of orange and coriander. Quite a spiciness in there too.  In the taste there are notes of ginger too among the fruity notes of orange and peach.  It has a spicy zing in the finish along with some nice bitterness.  As with all of the best Belgian tripels the strength surprises.  This one is 9.0% ABV but it is so easy drinking.  I am more than happy to have this 750ml bottle to sup all evening and at a cost of about £12 it is worth every penny.  With two more Belgian beers to come I must say this is beginning to look like my best #12BeersOfXmas yet with not a single duff beer among them.  I am over half way now so here's hoping.