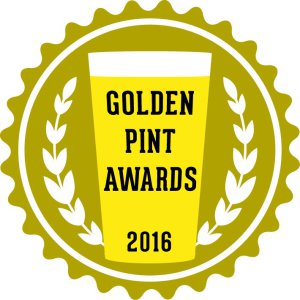 Well what a year 2016 turned out to be.  It was a bit of a mixed bag for me and very little time was found for writing about beer.  There was less drinking at home and more drinking in pubs which is how it should be so I did manage to consume (at least) my usual amount of fine ale so it is time to award my Golden Pints.  Thanks to having the facility to download my Untappd check-ins now I can tell you I have made 897 so far this year and 31 different beers were awarded top marks.  This will (hopefully) help me narrow my choices down and speed up the writing of this post.

It was a year in which I re-discovered Birmingham but this was tinged with sadness following the departure of Chris and Sharon from the Craven Arms.  Birmingham's loss has been York's gain so if you are ever in York then head to the Woolpack.


As always, each winner is accompanied by a little explanation as well as some close seconds listed where applicable so cue the drum roll ........


This is always the most difficult category for me and yet again this proved to be the case.  I had a few pints of Mud City recently at The Bear Freehouse in Stratford-upon-Avon and it was as good as I remembered it to be from when I was first introduced to this beer a few years ago.


Many more keg beers were consumed this year.  This one was an IPA full of English hops which I thought was really fab when I made my first visit to Brewdog, Brighton.  Marble's Damage Plan was a very close second.

Plenty of choice in this category as usual.  This particular beer I bought from the brewery quite cheap when I was presenting them with the Yapton Beerex Beer of the Festival 2016.  I just wish I had bought more than the one.  A potent, intoxicating, hoppy monster of a beer.  Durham's Bede's Chalice (9.0% ABV), Siren's Tidal Wave (10.0% ABV) and Irreversible (8.5% ABV) from Twisted Barrel come a very close second.

Not had as many cans this year as I thought I might but that is simply because I have consumed less beer at home and I never make long train journeys.  Beavertown, king of the cans, won this category last year and this year they win it again with this beer which was simply stunning.

No trips abroad this year so very little to choose from in this category.  However, this citrusy session pale that was on tap at the Craven Arms was very pleasing.


An absolutely amazing beer found at Cotteridge Wines during #BadgeQuest2016.  I need to find this one again as my wife also fell in love with it.


Limited choice in this category but this beer was very smooth and just about perfect.


This was a bottle I had at the Needle & Pin micropub in Loughborough.  A Cloudwater / Magic Rock collab with JW Lees yeast I believe.  A beautiful beer.

Something Something Dark Side (9.2% ABV) by Weird Beard


I am not 100% sure if this was cask or keg (update from the man who knows - I have been reliably informed it was cask) because the Craven Arms did some cracking beers from WB on cask this year.  However, this imperial stout was so good it would probably have won whichever category it fell into so I can make it my best overall beer.


They win once again for the distinctive artwork on their cans.   Magic Rock come a close second.

Still the best for me.  It is always a joy to see a Downlands beer with the distinctive South Downs signpost.  The beers are also first class and this year I have particularly enjoyed their Bramber (4.5% ABV), CAM-RAA 2015 (6.4% ABV) and NZ Red (4.3% ABV).

No change in this category either.  A classic design and I know the beer inside the bottle will be an absolute joy.  Thanks to more visits to Cotteridge Wines this year I have enjoyed more of their beer this year and, once again, I have a special one lined up for Christmas Day as part of my '12 Beers of Xmas'.

Fortunately, my first visit of 2016 to the Craven Arms in Birmingham came a few days after a Cloudwater Meet The Brewer event.  This enabled me to try a good selection of their fantastic beers on cask.  Then there is the fabulous DIPA series which are always worth seeking out.  Everything I have tried from them gets a high rating.  Definitely top of the Premier League for me.

There is a massive range of their beer available at Cotteridge Wines.  I have never been let down by any of them and often I have been elated (see best overseas foreign beer category).

I got to try some beer from Elusive quite soon after they began brewing earlier this year thanks to the Craven Arms in Birmingham and they followed this up with a Meet The Brewer where I got to try a full range of their beer as well as getting to chat with owner / brewer Andy Parker.  Every beer from them is first class.

Stratford Alehouse, Stratford-upon-Avon
This pub is everything you wish for in a micropub.  Great beer, excellent owners and fantastic regulars.  It has been my weekday 'local' since May and is by far and away the best pub in a town dominated by Greene King.  The Brooksteed Alehouse, Worthing and the Craven Arms, Birmingham both come a close second.  The Brooksteed Alehouse would have won if I had not been sent away to work and the Craven Arms would have won if Chris and Sharon had not been forced away.


The history of this bar goes back to 1898.  After closing it has been a shoe shop and a coffee shop before Dark Star acquired it and re-opened it as a bar.  With six casks (mainly from Dark Star) and ten keg lines featuring the best craft breweries around the UK this is a beer destination in a town that needed some new life for the beer connoisseur.

One of only two beer festivals I attended in 2016.  However, excellent beer choices and a great venue for this one made it an easy winner.  Southern Fail ensured I could not get to the GBBF.  Yapton Beerex, my local CAMRA festival, was discounted as I was not attending it as a customer.  However, as I will be organising it in 2017 (May 12th-14th) it will obviously be the best beer festival next year!

Not really shopped for much supermarket beer this year but Marks & Spencer continue to have an interesting selection.

Winner for the fourth year running and, thanks to now working within a short drive once again, it has become the only place I buy beer from to consume at home.  They also have a great little bar at their shop too now so it has just got better with each visit.  There are other places in Birmingham that I need to check out though.  This is on my 2017 'to do' list.

I have bought very little beer online in 2016 but I have been a sporadic subscriber to the monthly offering from Beer52 which always seems to have an interesting beer or two along with an excellent magazine.


Not really read any beer books this year.  Stephen King takes up all my spare reading time.  However, this winner is the magazine that comes with the box of beer from Beer52.  Always has some excellent articles from the best beer writers around.

It has been THE toughest year for Jim (aka Beers Manchester) summed up within this particular poignant post.  The most genuine guy you could ever meet.  Other blogs I particularly enjoy reading come from Pub Procrastinator (@Deeekos), Pub Curmudgeon (@oldmudgie) and Rach - Look At Brew (@lookatbrew).

Winner for a fourth successive year.  Keeps track of everything I drink.  I'd be lost without it.  I like collecting badges too of course !!

I have not been using Twitter a great deal this year.  So difficult finding the time.  However, due to their 'Big Beery Night' and '12 Beers of Xmas' on top of those excellent podcasts etc etc this is an easy award to make.  Steve represents all that is wonderful about the friendly world of beer in the great digiverse.

Another local brewery that deserves a big mention for consistently producing excellent beer.  They relaunched their website in 2016 and it comes with a quote from me.  Looking forward to brewing a special beer with them for Yapton Beerex.

That brings 2016 to a close.  Work has taken up far too much of my travel time but it has meant I have got to know Birmingham a little bit better.  The first few months of 2017 will be taken up with organising a beer festival (yes yet another plug !!!) so if you can make it down to my little corner of West Sussex in May I'd be really pleased to see you.

Happy Christmas and New Year to you all.
Posted by Unknown at 11:03