My second substitution of my #12BeersOfXmas and another trip into continental Europe.  Holland to be precise.  Brouwerij de Molen began brewing in 2004 in a windmill called De Arkhuif, a building dating back to 1697, situated in the town of Bodegraven.  They have had joint beer projects with Mikkeller and de Struisse as well as taking part in recreating historic recipes.  Their success required another building which was acquired in 2012 a short distance from the mill which increased their capacity per batch to 2500l.  In 2010 they were rated in the top ten of RateBeers "Best Brewers in the World".  Quite some feat.  Cotteridge Wines stock a wide range of their products and I have loved every one if them. 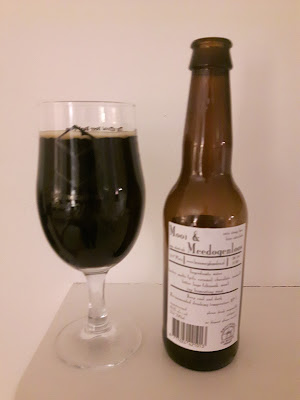 Earlier this year I tried a bourbon aged version of this beer and both myself and my wife fell in love with it.  So much so that I awarded it my favourite foreign bottled beer of 2016.  However, this one I prefer if I am being honest.  It has four malts (pils, caramel, chocolate and roasted), two hops (Chinook and Saaz) and a top fermenting yeast.  It is like a barley wine in many respects with plenty of rich fruit cake flavours and the chocolate and roasted malt character shine through too.  It is silky smooth and so drinkable.  A really fabulous beer.  I will be buying more of this in 2017.