Harveys of Lewes is the oldest independent brewery in Sussex.  The business was started by John Harvey and his name lives on with the John Harvey Tavern pub across from the brewery.  The Harvey family acquired their current site in 1838 at a cost of £3100.  Today there is an eighth generation family member still working at the brewery.  They brew some fabulous dark ales with their winter Old Ale particularly worth finding each year.  It is on the back of my love for this beer and some other bottled delights that have come my way in the past from them that I had to include this bottle of Christmas Ale.  Traditionally my Christmas Eve selection has to have a picture of santa on the label too and it fits the bill there also.  It should be noted further that this beer is a recipient of Finland's Olutseura Olviretki award no less.  This is because it 'excellently' fulfills "The Christmas Beer Regulation of the Seven Brothers" described in Aleksis Kivi's novel 'Seven Brothers'.  So there you go. 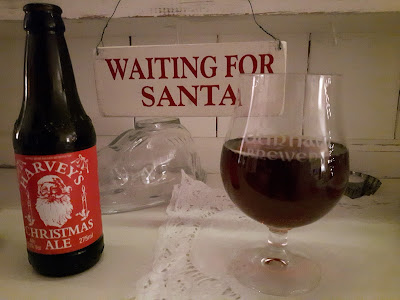 Untappd has this down as a barley wine - not my idea of one.  It is very warming and flavours like you would get from a lightly spiced fruit cake but there is a flavour in the aftertaste that doesn't sit right and yet again my wife agrees.  Beer #2, the barley wine from Ballards, was much better for our taste buds.  It does have plenty of character and complexity and it is not overly sweet which is a plus point.  A pleasant enough concoction for Christmas but I wouldn't rush for a second.