Ballards Brewery have been around now for many years having produced their first pint in 1980.  It has been operating from the Old Sawmill in the village of Nyewood in the shadow of the South Downs since 1988.  Their beers have had national success culminating in the gold award in the strong Bitter category in CAMRA's Champion Beer of Britain 1999 for Nyewood Gold (5.0% ABV) which is still brewed today.  A fine beer it is too.

Pagoda Power is part of their Bounder series which originated back in 1986 when they brewed an 8.6% ABV beer to celebrate the 900th anniversary of the Domesday Book.  In 1989 they decided to brew another special with the original gravity matching the year and a competition was run to choose a name.  The winner was 'Old Bounder'.  This also saw the start of the annual Ballard's Beer Walk held on the first Sunday in December where they launch the latest in the 'Bounder' series.  The beer labels for this series have all been done by John Cousen, a local graphic designer and cartoonist.  I believe all of these specials have been in the style of a barley wine and Pagoda Power was the beer lanched last year (2015).  I have purchased the 2016 beer (Split) which is being kept for next Christmas although I was fortunate to have a pint of the cask version on the walk earlier this month at the fabulous GBG-listed pub, the Three Horseshoes in neighbouring Elsted, which has the finest pub garden you will find anywhere. 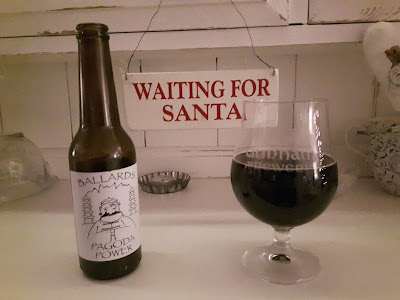 Yum we both prefer this one to beer #1.  This is a proper barley wine and sadly you don't find enough beers like this any more.  We both enjoyed the Split on cask earlier this month but this has aged well and is much more rounded.  They really must be left at least a year.  Lots of vinous fruit flavours come with the aging process and for that I am truly thankful.  Rich and warming but there is nothing heavy about it.  Slips down really easily and I have never been disappointed by any of these 'bounder' beers.