Today we head to the East Midlands for a massive beer from those cheeky primates at Blue Monkey, a brewery established in 2008.  They are now based in Giltbrook where they produce up to 20,000 pints a beer each week with such great names such as BG Sips, Ape Ale, Funky Gibbon and the fabulous 99 Red Baboons.  They also have four pubs, all of which are called the Organ Grinder, and one of these is in my home town of Loughborough.  I have to thank my work colleague, Martin Hamer, for this particular beer.  He lives a short hop from the brewery and when he told me about this one he kindly offered to pick one up for me. 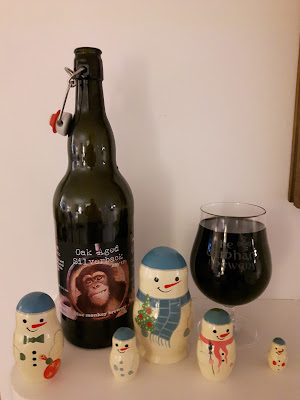 This is the strongest beer I have ever tasted coming in at 13% ABV.  It also comes in a full 1 litre bottle.  The Blue Monkey guys brew an imperial stout called Silverback, the name for an adult male gorilla.  This beer comes in slightly lower on the ABV scale but after storing it in oak casks it has obviously crept up a bit.  Coming on the back of the bourbon aged imperial stout from yesterday it will make an interesting comparison.  Flavour-wise I prefer this one.  It is beautiful with everything you expect from an imperial stout.  My wife found it too strong with the texture of engine oil and wasn't very keen but my main complaint was it was totally flat.  Very little condition to it.  The Durham beer from yesterday had the right amount of carbonation and body but I wasn't totally enamoured with the bourbon notes.  This beer has no body but decent flavours.  I am still yet to find the perfect imperial stout this Christmas then but I will keep looking.