This beer was not chosen for it's recognised excellence in the world of beer unlike many of my others in my 12 Beers.  My boy has to leave a bottle of beer out for santa each year and the name and picture on the label is more important than anything else.  My suggestion for the beer to leave this year got overwhelming approval so this beer is already a winner.

I think this is my first beer from Naylor's Brewery in any form.  Naylors began in a pub in 2005 and they moved to a new site a year later.  In 2009 they expanded further but remained where they still are, in the village of Cross Hills in North Yorkshire between Skipton and Keighley, where there is also a shop and bar on site.  Good brewing country indeed.

I'm not sure what kind of beer Santa's Darkside (4.4% ABV) will be but I'm expecting a dark wintry beer.  It looks black in the pic but it actually poured a nice dark brown and it gave off a distinct aroma of toffee.  My wife was a bit bored by it.  A little bitter she said but felt that any taste quickly disappears.  Bah humbug.  It's certainly not as malty as I was expecting.  There are caramel notes in there for sure but a spicy hoppy bitterness comes through in the finish that is a little dry.  I think it needs more dark malt in there but it's a pretty decent bitter.  More of a brown ale than an old ale really but drinkable.  I would give it a score of 6/10 and I hope santa appreciates the remains of it later on. 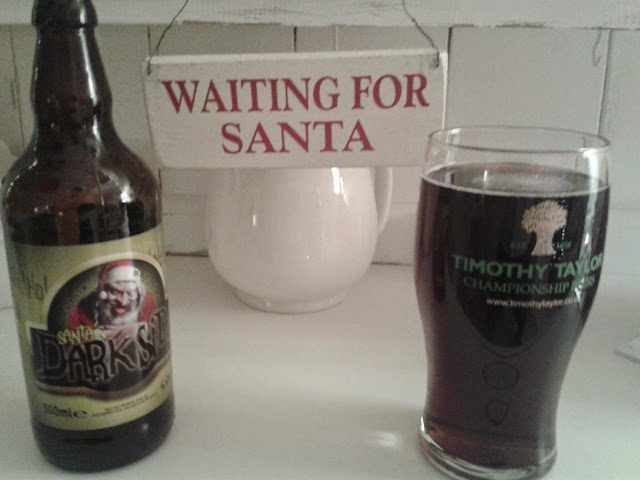