When it comes to beer Gales Ales were my first love.  I was brought up on Martsons Pedigree and  Home Ales in my teens as well as lager but once I had a pint of Gales HSB in the early 1980s beer it was and particularly HSB.  In the mid 80s I even completed the Gales Ales Trail which was a year well spent, drinking a pint of HSB in every Gales pub.  Nowadays I can't get enough of hops but I still have a fondness for rich malty beers.  Gales disappeared in the mid noughties following the sale of their operation to Fullers in late 2005 but they retained HSB and I must say I still think it is a pretty decent pint.  In fact it is probably an improvement on what HSB had become by that time.

One of the special beers from Gales was the highly acclaimed Prize Old Ale (9.0% ABV).  At Gales you could have bottles of Prize Old Ale or HSB relabelled to your own design for special occasions and when our son was christened in 2005 we thought it would be a good idea to do just that and give all of the attendees a bottle of Prize Old Ale to take away to commemorate the occasion.  I obviously kept a few bottles back for my own consumption too and I am now down to the final two (the last one will probably remain unopened).  The beer was stored in oak vats which gave the beer a distinctive tartness.  The bottles are corked and the beer should mature and improve over the years so tonight I will find out what a 10 year old bottle tastes like.

The cork came out with a nice pop and it poured quite thick and it is very dark, nearly black.  It smells a bit like port and quite intoxicating.  My wife thought it smelt a bit like HP sauce and had the taste of twiglets.  To be honest I thought it was actually lacking in taste and the taste it did have wasn't that nice.  It was also toally flat and lifeless.  There was a taste of treacle in there but very little else.  This is an experiment that hasn't really worked.  It isn't pleasant and I won't be finishing it and I will open a bottle of HSB I had in for any vistors wanting a beer over Christmas.  The last bottle will definitely remain unopened.  Never mind. 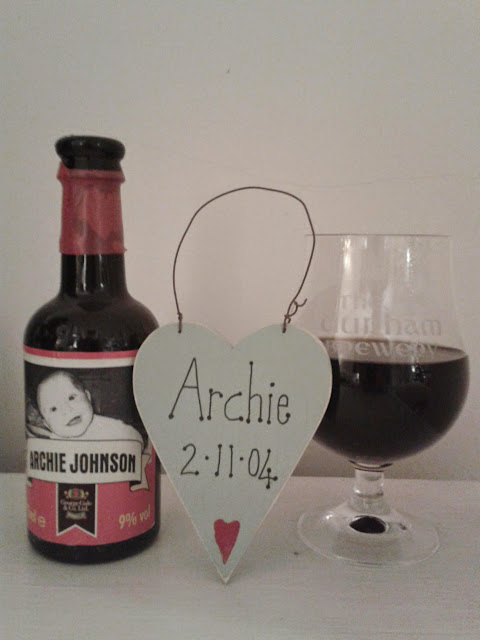