Amazingly, this will be my first taste of a Lambic beer.  This has meant reading up as to what it is and how it differs to other beer.  Lambic beer has been around for hundreds of years and it is the oldest beer style in existence.  From what I understand it is a type of wheat beer and under protective laws the mash must contain at least 30% wheat and the wheat is not malted.  The boil is a long one, lasting for three hours or more and the wort is heavily hopped.  These are not fresh hops though.  They are four years old and used just for their preservative qualities.  After boiling, the wort is pumped up to the brewery attic where it sits in a shallow open fermenter.  Windows are left open and during the night wild yeasts will enter and attack the sugars in the wort once the temperature falls below 18 degrees C.  When the beer reaches the maturation halls it will be stored in oak casks.  The wort is therefore affected by yeast strains from the wood of the casks and the cellars as well as from the atmosphere.  The beer will stay in casks for several years.  This laborious process probably explains why there are so few producers of this beer style left.

That brings us on to Cantillon.  Cantillon is the last lambic maker in Brussels.  They began brewing in 1900 and the only major change came when they switched to organic ingredients in 1999.  Cantillon describe themselves as the Museum of Geuze and they continue the strict use of traditional brewing methods.  About half of their production is the Geuze, a lambic beer that it is a mix of young and old lambics with the younger causing a fresh fermentation in the bottle.  The character of the beer will obviously depend upon the blend that is used but it usually about 60% young.

So what does this beer taste like?  Firstly, the bottle has both a bottle top and it is also corked.  It pours a very slightly hazy golden colour.  My wife took a sip and said 'that is not beer - it's disgusting'.  I guess it's all mine this one then!  The aroma is sour with hints of marmalade.  I am reminded slightly of the first Belgian saison beers I tried.  It is definitely tart which I was expecting but with a fruity mellowness to it.  It is not a strong beer - coming in at just 5.0% ABV.  Lemon, lime, apple and orange are all evident giving a very sharp tanginess that takes some getting used to but it is also refreshing and different in a good way.  It's like your first taste of a tangy sour sweet.  It catches you off guard but once the reaction is bedded down you adjust to it and the flavours begin to come through.  I think if you like saisons you will like this beer too.  I have been enjoying saisons more and more this year so that's probably why I find it enjoyable.  I'm very glad to have included this in my 12 Beers and will be happy to drink more of it. 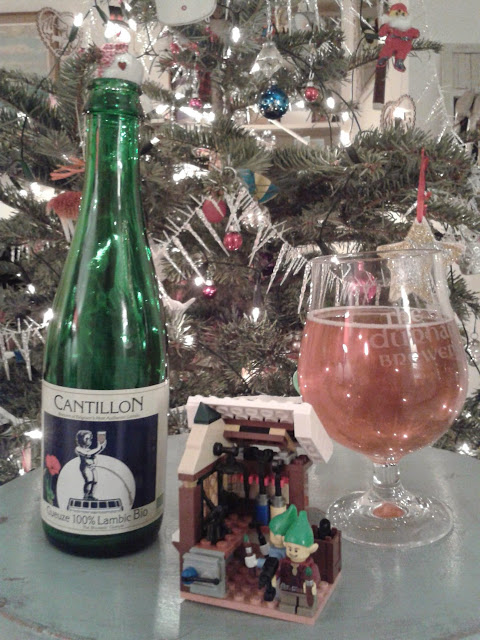