This week I venture into the Peak District on the outskirts of Sheffield, one of the top beer destinations in the UK.  From the map it looks like Bradfield Brewery is situated in a lonely spot down on a farm, Watt House Farm to be precise.  It is still a working farm and has been in the family for three generations.  The brewery has been operational now for a decade which makes them something of an established brewer.  They even have their own pub, The Nags Head, just a mile from the farm, and where their beers can be enjoyed for just £2 a pint.  This is surely worth a visit some time then although you must also visit the brewery shop too as they are so close to each other you surely can't visit one without the other.  It would be rude not to.

Despite their longevity in the brewing world this is my first encounter with Bradfield.  I still haven't got round to visiting the beery delights of Sheffield where I expect their beer can be found freely available and at beer festivals I have visited they may or may not have been available as I don't tend to remember the beers I don't drink.  It's hard enough remembering the ones I do.  Anyway, without further hesitation, it's time to crack open the first bottle.

This beer has won a silver award at a local beer festival back in 2008.  I was initially a little underwhelmed by this beer though and my wife described it as 'a bit bland'.  It soon won me over though and in fact it came across as a little like a Belgian pale ale.  It is lightly sparkling with a floral aroma.  There is a hint of sourness that I associate with some Belgian pales along with hints of oranges before getting more complex fruity (citrussy) and floral notes coming through.  The finish is on the dry side and the aftertaste is fairly short.  By the time I got to the end of this beer I was wanting more so I can give it a score of 8/10. 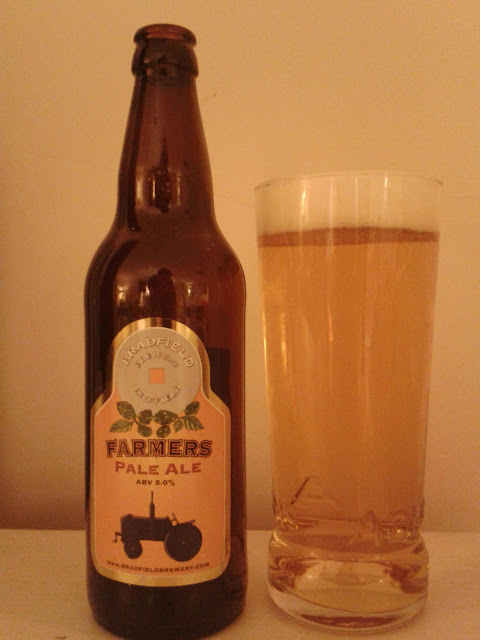 This second beer racks up the strength and that certainly comes through in the taste but I couldn't quite get to grips with this one.  It is very light in colour and it is described as a lager type ale.  There was not much aroma to it and I found the initial taste a little earthy.  There was something there that I could not quite determine that was putting me off.  The strength really kicks in at the end and the strong fruity flavours came through here too for what was a satisfying refreshing finish.  Overall it did not have the big flavours that I like with strong pale ales but it is a challenging beer.  My wife desribed it as 'odd'.  Appropriately, it picks up a score of 6/10 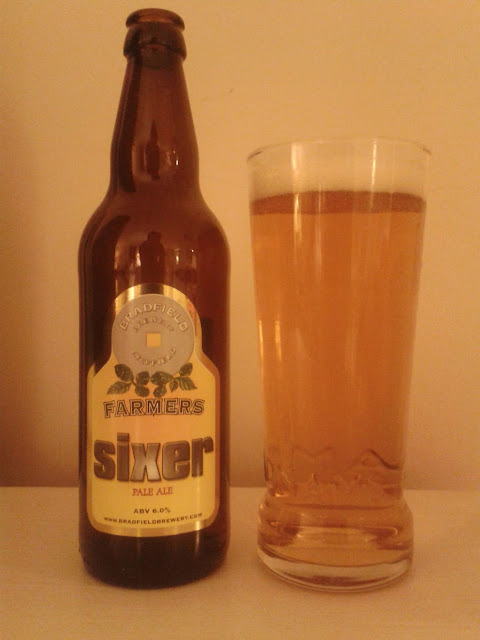 For the final beer we venture over to the dark side.  For my wife this was very much her favourite beer of the three.  As with the first beer it has picked up an award.  Two actually, the first being a silver at the 2007 SIBA North Regional Beer Competition and the second is a bronze award much more recently at a local beer festival.  It is described as a 'black and white' stout as roasted malts are combined with flaked oats.  The colour is most definitely black though.  It gives off a nice smoky aroma.  It is not as rich as I like my stouts to be but it is only 4.5% ABV.  Initially there is a bit of a fruity tang to it but this gets replaced by a nice coffee bitterness in the finish and throughout there are plenty of liquorice notes.  I could not quite decide between a 7 and an 8 for this beer but as my wife loved it so much I will mark it up to 8/10. 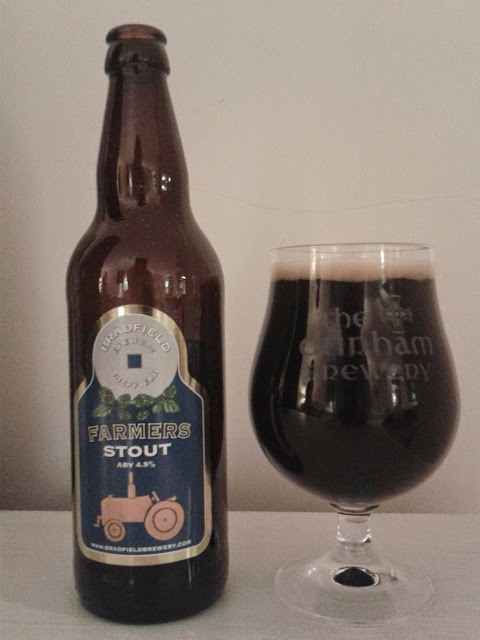 I did not get very excited by the beer labels with these bottles.  The brewery name does not stand out at all although the fact that the brewery is located on a working farm comes across with the tractor symbol.  Having said that the Sixer was my favourite label and the tractor was missing on that one for some reason.  I did like their logo however on the pint glass pictured on their website.  Here the brewery name is below the millstone and the hops rather than hiding inside it.  It is the quality of their website that helps Bradfield excel here.  Colourful and easy to navigate with plenty of information on all parts of their business.  Overall a score of 7/10 here which gives an overall score of 29/40.

Next time I will be reviewing Saltaire Brewery.