It is time I took a break from Yorkshire ales so for this review of beers I am staying close to home.  I don't often buy bottled beers from Sussex breweries because I have the cask versions often enough due to a lot of pubs selling LocAles.  However, sometimes there are beers that are only available in bottles and a visit to the Crafty Pint, an excellent specialist beer retailer in Midhurst, gave me the opportunity to sample something new along with a couple of old favourites.

The brewing scene in Sussex is very vibrant at the moment with a total of about 50 micros now actively brewing across East and West Sussex.  This total was in single figures a couple of decades ago with the two family brewers of King & Barnes in the west and Harveys in the east dominating the pub scene.  King & Barnes were my favourites and, as I was living in Horsham at the time of their closure, their demise was felt particularly hard, especially as those interlopers from Dorset, Hall & Woodhouse, retained the one K&B beer I did not like so it was goodbye to K&B Festive and K&B Old.  The excellent K&B pubs were left with the bland Dorset beers of H&W and it has taken a long time to see an improvement and even now there are large areas of West Sussex, particularly around Horsham, that are dominated by the stuff from Blandbeer Forum.

Following the closure of K&B it was, thankfully, not an end to the King name or the K&B beers as Bill King formed WJ King, and former head brewer Andy Hepworth started Hepworths, both based in Horsham.  To this day Hepworths brew a fantastic Old Ale very similar to the former K&B Old and WJ King brewed a beer called Red River that bore enough similarities to the old Festive that I loved so much.  I have probably consumed more pints of Festive than any other beer.
Bill King sold his micro in 2013 but it was not the end of the road for him.  It wasn't long before he was brewing again, with the launch of Firebird.  I visited this new brewery not long after they began brewing and you can read about that visit here.  All of this preamble is moving me on to the first two beers I have enjoyed over the past couple of weeks with the latest creations from their take on world beer styles.

This first beer is based upon the style of a Belgian pale ale.  It has the typical aromas from the Belgian yeast.  This is a superb beer and the best compliment I can pay is that it is one of the most Belgian of Belgian-style beers I have tried from a UK brewer.  It is fruity and rich with prominent notes of orange and a fine malty base.  The finish is a little dry and totally refreshing.  At just 5.4% ABV it is a little on the weak side for this style perhaps but you would probably think you are drinking something stronger as it has plenty of body.  I will be buying more of this next time I see it on the shelves. 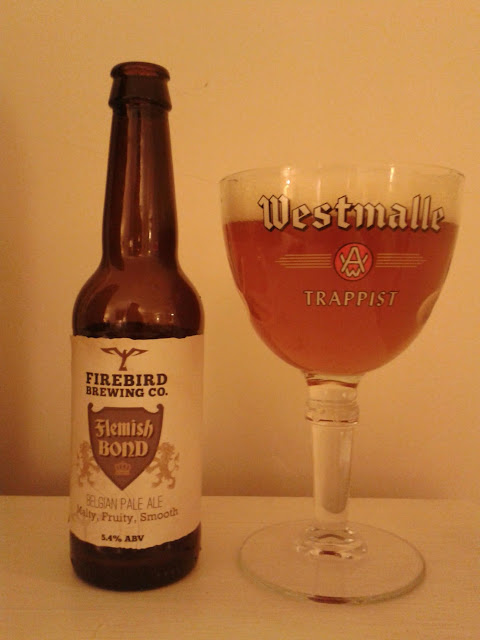 For the second beer from Firebird we travel to Germany.  This beer has the perfect description on the label - it is rich, fruity and warming.  That does not begin to describe the complexity though as I detected hints of toffee, butterscotch, peach, vanilla, banana, orange and sherry.  The aroma is equally as intoxicating as the flavours.  The only criticism with this one would be that it seemed to lack body as it did appear a bit thin and lifeless after pouring.  The aroma and flavours though clearly made up for that. 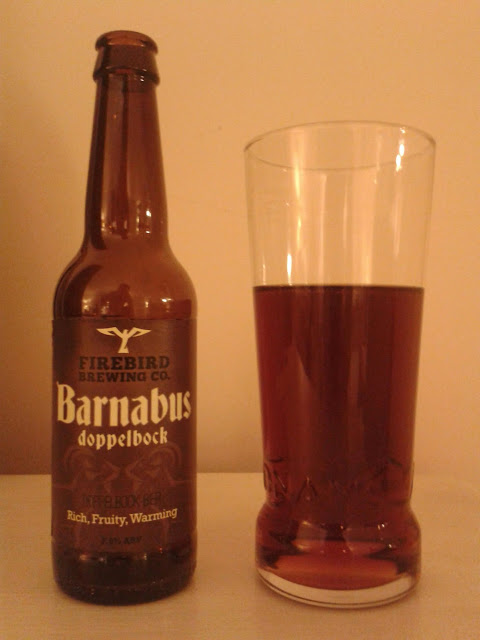 We now leave the north of the county and head across to the eastern part for the next couple of beery delights .  Harveys need no introduction.  A fabulous regional brewer in the town of Lewes whom I have written about a few times.  Long Man are a micro that began brewing in 2012 using a 20bbl plant using local grain and a traditional strain of Sussex yeast.  They are located on a farm near the famous Sussex landmark, the Long Man of Wilmington, from which they came up with their name.

Old Ale has long been a popular Sussex tipple.  As already mentioned, the K&B Old Ale was a particular favourite of mine and Harveys still produce a fantastic old ale each winter.  Many of the Sussex micros now produce an old ale and Old Man is one I have never tried before.  The first thing I notice is the colour.  It is not black but a very deep rich brown colour.  There isn't a great deal of aroma to it.  There is a heavy roasted malt character to it with the chocolate and coffee notes that go with this but I also detected some woody notes along with aniseed and bonfire toffee which all leads in to a smooth bittersweet finish.  It's a very nice old ale but I think I still prefer the Harveys and the Hepworths. 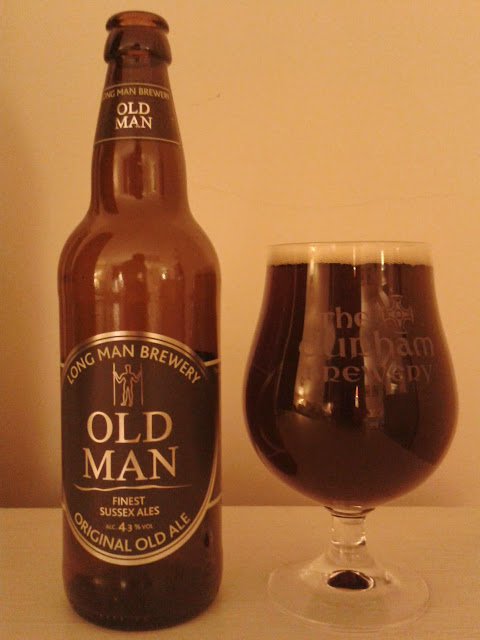 After buying this bottle of Porter, a Harveys seasonal offering, I walked out of the Crafty Pint to the Swan Inn, a Harveys tied house where I enjoyed a pint of the cask version.  Harveys pubs are few and far between in the western part of Sussex and the Swan is a pub I always enjoy going in.  I found the cask version slightly sweeter and I preferred this bottled version.  It has a lovely smooth texture and it is quite full-bodied.  There are plenty of dark berry flavours adding sweetness and in the finish there are notes of aniseed and particularly liquorice.  There is an underlying bitterness throughout whereas the cask version didn't seem to have this.  A lovely beer though whichever source you choose. 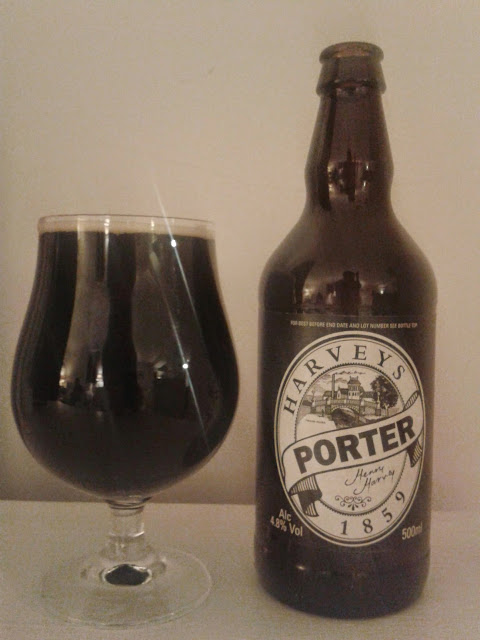 Finally I am heading over to the western part of Sussex and beer from two established Sussex micros that have been producing excellent beers for some time.  Ballards is actually close to the Hampshire border and have now been brewing for 35 years which probably makes them one of the oldest micros in the country.  They even won a gold award at the 1999 Champion Beer of Britain in the strong bitter category with their Nyewood Gold.  Langham Brewery are located not far from Ballards, a few miles to the east of Midhurst whereas Ballards are a few miles to the west.  Langham will be celebrating their 10th anniversary next year and they have gone from strength to strength in recent years coming up with some cracking beers, notably my favourite cask ale of last year, their 3.9% ABV Saison.

From Ballards I chose a bottle of an old favourite.  Wassail has long been a favourite beer of mine and it is a superb beer for the winter months.  It is in fact listed in the Roger Protz book, '300 Beers To Try Before You Die', and I can't argue with that.  Read the book and you will find out more about this brewery and the beer but here you will just learn that the beer is as complex as the label.  There are no magic ingredients here though.  Pipkin pale and crystal malts combine with Fuggles and Goldings hops.  It is rich and warming with notes of orange, rich Christmas cake fruits and a sweetness in the finish which also has a tangy spicy character to it.  The cask version is often hard to find but it is probably even better than the bottled version.  My wife loves this beer too and it was great to enjoy a bottle of this for what is the first time in a number of years. 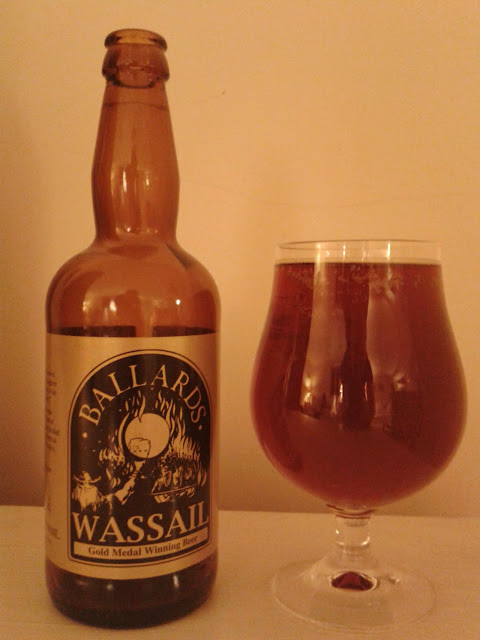 
My final selection is a perfect session beer from Langham.  I have only had this in bottle once before but since then I have enjoyed the cask version often.  It is a crisp, light refreshing session bitter but the cask version is much better than this bottled version.  There is a floral hop aroma which combines with a sweetness from the malt initially.  The sweetness seems to dominate more than it does in the cask version.  The finish is dry and refreshing with some citrussy notes, predominantly lime. 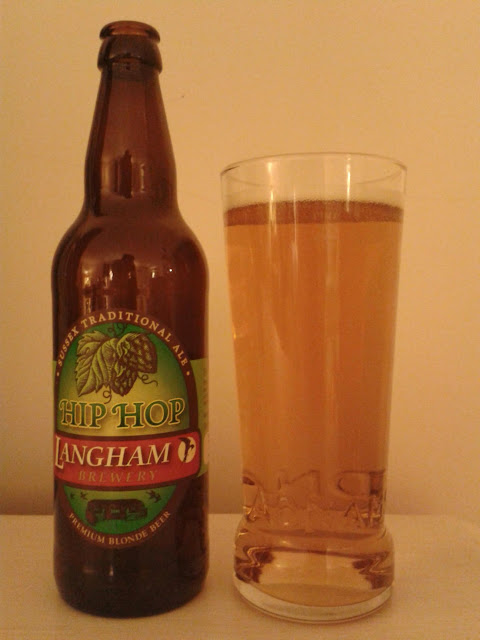 That brings my review of Sussex beers to a close.  The scene is buzzing down here with both new and established micros so grab yourself a drop of Sussex and hopefully you won't be disappointed.