Horsham - The Old and the New

A trip to Horsham was planned yesterday for a number of reasons.  Firstly, I had to survey the Malt Shovel.  This is the North Sussex CAMRA Pub of the Year and all branches have to visit the winners of the other Sussex branches to come up with an overall Pub of the Year for Sussex.  Secondly, I wanted to pay a first visit to the new Dark Star bar, the Anchor Tap.  Finally, I was off work so it seemed like a great way to spend a day. 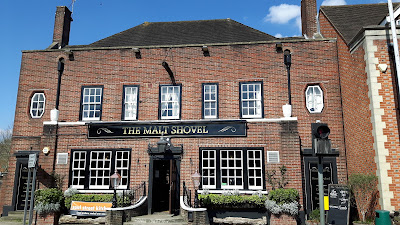 I lived and worked in Horsham for a number of years from the mid 1990s and fell in love with King & Barnes beers along with many of their pubs.  However, the pub I considered to be my local was the Malt Shovel which sat in the shadow of the King & Barnes brewery.  The landlord was a guy called Steve Williams who is sadly no longer with us but he was a top bloke and a much loved landlord.  He loved his beer and, although he didn't sell much from the local brewery, that was really because he felt people could drink it in any pub in town so he wanted to offer alternatives.  He always sold great beer so it was interesting to go back and see how the pub had changed.  I was expecting to be disappointed because it is now owned by Enterprise Inns but when I saw the line-up of beers my worries disappeared. 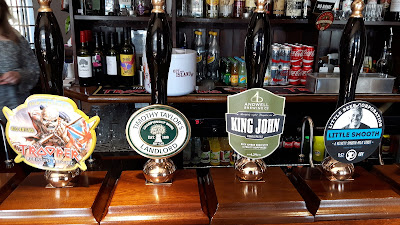 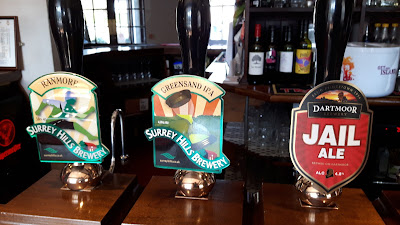 I love the beers from Surrey Hills, especially the Greensand IPA (4.9% ABV) but I began with the Ranmore (3.8% ABV) as it is one I am yet to try from them.  It is a first class dry, hoppy and bitter session beer.  I followed this with a Little Smooth (4.5% ABV) from the Little Beer Corporation of Guildford.  This is the first time I have seen one of their beers in a pub.  I thought they only produced bottled beers so I was well pleased to find this one.  It is a superbly smooth milk stout that is not overly sweet.

I was also delighted to see that the pub itself has changed very little since I was last here.  It has probably been smartened up a bit but other than that it was like stepping back in time.  The main bar area wraps around to the left as you enter from the front door and there is lots of wood - floors and neatly laid out tables and chairs.  To the right as you enter is a smaller area mainly for dining with flagstone flooring.  The pub has a great feel to it with friendly staff so there was nothing to dislike at all.  If I still lived in Horsham I'm sure it would still be my local.

On my way to the Anchor Tap there was time for a nostalgic look at two of my old favourite K&B pubs.  Both The Bear and Ye Old Stout House were classic town centre pubs with a lively crowd of young and old enjoying the local beer.  The pubs are still there but the local beer has gone so I didn't step inside.  They wouldn't be selling anything I wanted to drink. 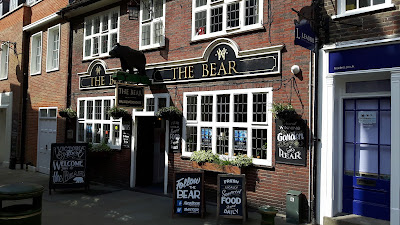 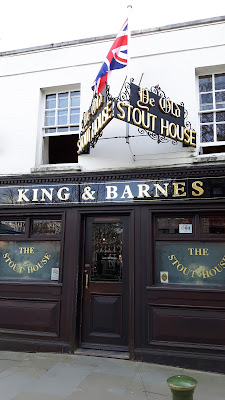 I still had a few minutes before the Anchor Tap was due to open their door so I went into the excellent Beer Essentials.  The owner of this fine specialist beer shop used to manage the K&B brewery shop and I picked up a few bottles (and a can) of some local treats.  This shop has been here for many many years now and has obviously thrived. 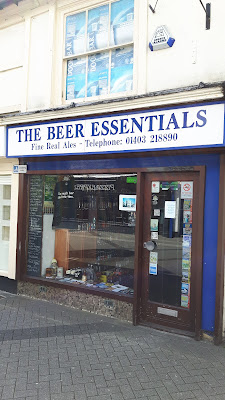 The Anchor Tap was now calling to me.  It is located a few doors down from the Beer Essentials.  It is a small bar, micropub sized really, with seating for 30-40 at most.  On opening day they had to send people away because they were full and I'm sure it has been bursting since then on many occasions although today I was one of just a handful of customers which suits me just fine.  It is an elegant building dating back to Victorian times and although it has recently been a coffee shop it was formerly a pub called the Anchor Tap so it is great that they have revived the name. 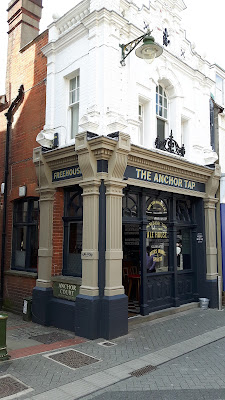 Firstly I had to choose a beer.  With five cask beers (three from Dark Star) and eight kegs I was spoilt for choice.  I went for a couple of keg beers.  I began with the  Oakham Citra Export (4.6% ABV), a slightly stronger version of their usual Citra.  It has a bit more oomph to it.  Then I chose the fabulous Marble Dobber (5.9% ABV).  This was my second Marble keg beer this week having tried their Damage Plan IPA (7.1% ABV) on Tuesday in the Pub of the Year from my own CAMRA branch.  I actually preferred the latter but Dobber is still a wonderful beer.  However, I prefer the cask version I have had a few times previously.  This is not unusual for me as I always have an issue with the temperature of keg beers.  They always improve as the beer warms up. 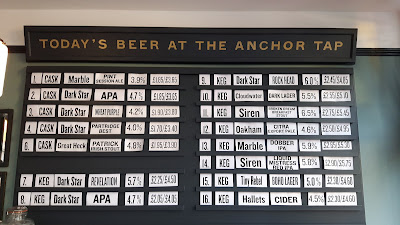 The bar itself is very bright and shiny with a clear beer-board showing what's available.  To me it has the look and feel of an old-fashioned American ice cream parlour.  The bartenders are smart and wear aprons and it wouldn't have seemed odd if they served up a root beer float. 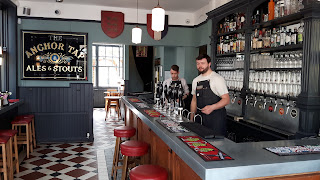 The pub is adorned with wonderful mirrors, part wood paneling on the walls and a shiny tiled floor under foot.  You can either grab one of the stools and sit in the bar area or go to the bright back room and sit at one of the few tables.  I must confess I love the whole feel of the place.  Lots of attention to detail and no expense spared it seems. 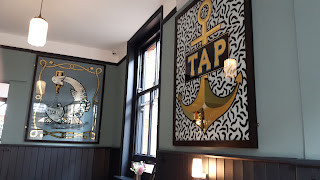 There was time for more beer before heading home and I concentrated on more from two of Manchester's finest.  Another from Marble (Pint), a superb 3.8% ABV hoppy session ale (cask) and a dark lager (5.5% ABV) from the Cloudwater winter range (keg).  Both of these breweries can do no wrong as far as I'm concerned.

I thoroughly enjoyed my return to Horsham and as it is slightly less than 30 minutes on the train for me I will be returning for an evening visit very soon.  The Malt Shovel and the Anchor Tap will be where I will spend my time because, in a town that is now dominated by Hall & Woodhouse, they are shining lights.