For my next Yorkshire brewery I travel to the beautiful town of Holmfirth and the newest brewery I have reviewed so far.  This tiny one-man operation was established at the end of last year and I must say I love the name of the brewery.  Holmfirth of course is famous for the TV series 'Last of the Summer Wine' which is the show where all the BBC comedy actors and actresses of the past 50 years end up when they reach retirement age.  What do we do with old so-and-so?  I know - let's create a new character for LOTSW.  There is already a Summer Wine brewery of course which I know and love and now we have Here Be Monsters too.  Scary.

Cyclops is the one-eyed monster and the cyclops beer range are single hop beers.  This particular one is the Cyclops Citra which is an excellent name for a beer.  The aroma was quite fruity and there wasn't much body to this one.  Quite thin with a light, dry, lemony hit to it but quite restained I felt in those citrussy flavours.  Then came quite a sharp tangy hit in the finish which included a bit of pine cone.  The aftertaste was a little disappointing as it faded away quite quickly and my wife described it as bland.  I think a score of 6/10 can be given to this one. 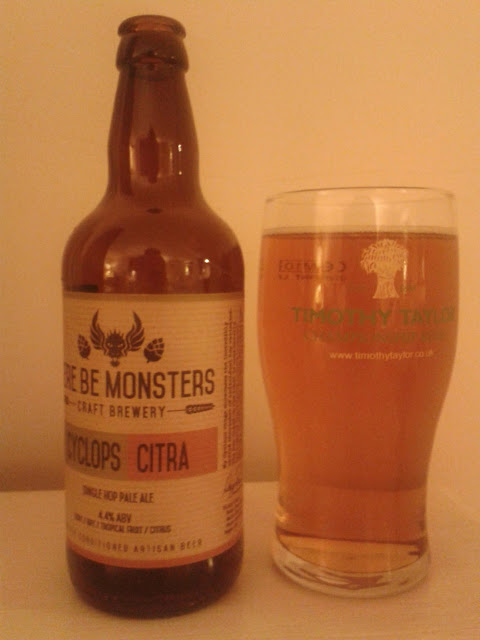 The fury comes in many different colours.  I didn't buy the Red Fury but the Blonde and Dark are both tried here.  The aroma of the Blonde was of a tropical sweetness rather than the lemon and grapefruit I was expecting.  The flavour was even weirder.  I found it overly sweet with no real bitterness and there was an aftertaste to it that I can't quite describe.  The sweet malt character was too dominant for me throughout.  My wife found it equally strange with hints of marmalade she said but that wasn't what I was getting.  The bottle had a ton of sediment in it so I'm not sure I had a good bottle or not but it was totally different to what I was expecting and how it was described.  This particular bottle can only get a 5/10 from me sadly. 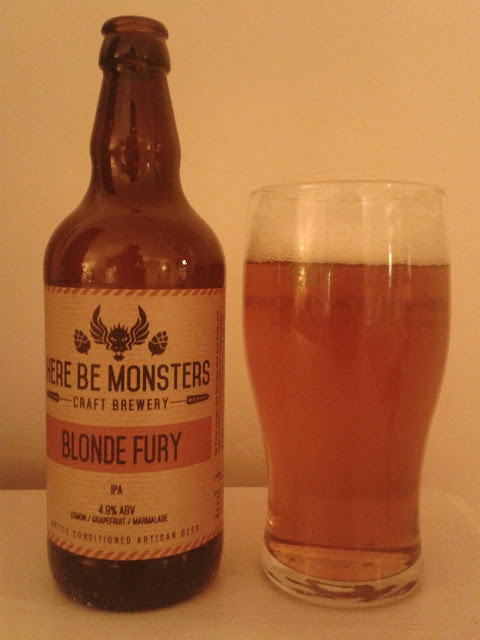 After the disappointment of the Blonde I wasn't sure what to expect from the Dark.  Wow.  This is not scary at all.  Probably the best black IPA I've tasted for a long time and my wife loved it too.  The aroma was mainly of coffee but there was a hoppiness to it too.  There was a soft sparkling mouthfeel and the coffee aroma fed through into the taste along with hints of pine,  There was also a bit of a spicy edge to it in the finish.  It was incredibly smooth and the finish was a lovely bittersweet balance.  This one very nearly brings out my top mark and because my wife loved it too it does in fact get 10/10. 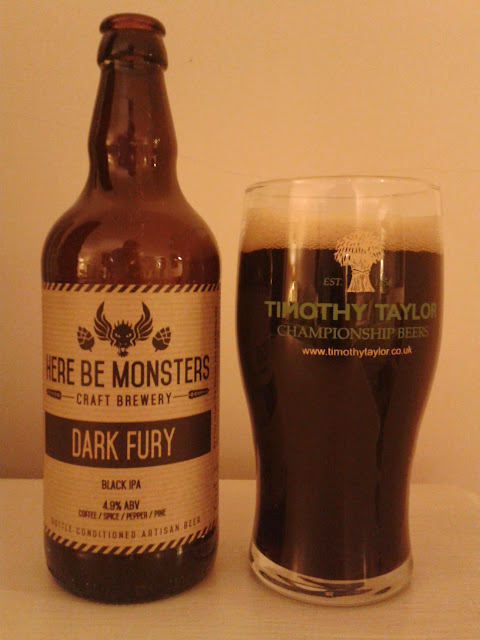 I think I've already mentioned that I like the theme of the brewery and the naming of the beers.  The labels are simple and clear and have a touch of Kernel Brewery about them which I've always liked for their simplicity.  The website is similarly designed and as the owner used to be a web designer I'd expect something pretty fab here yet it is quite understated and restrained.  Perhaps it needs a few monsters lurking in corners to ramp up the scare factor.  Overall a score of 8/10 for the marketing and design here which gives a final score for Here Be Monsters of 29/40.
For such a young brewery that is run single-handedly there is plenty of promise from Here Be Monsters and I look forward to trying more from them in the future.  The latest league table is as follows.

Next time I head to the Peak District and the village of Bradfield, the home of Bradfield Brewery.
Posted by Unknown at 15:39