It was a gloriously sunny day and after a good few drinks on the Friday night I was never going to get to the CAMRA AGM for the morning session but I did make it to the first planned pub before it was open so I headed back to the Cross Keys.  This plush pub on the fringes of the Lace District has pavement drinking where people were already soaking up the sunshine.  It appeared to have the full range of beers from the local Navigation Brewery plus a couple of others and I went for the Apus, a 5.5% American IPA.  I found the beer to be a little soapy with a few light lemony citrussy notes and overall a little disappointing.  I've had better from this brewery but this particular beer is obviously not one for me.  The pub itself is superb.  Very elegant with polished wooden floors, comfortable seating and high ornate ceilings.  Upstairs there is a dining room and outside you can watch the trams go by. 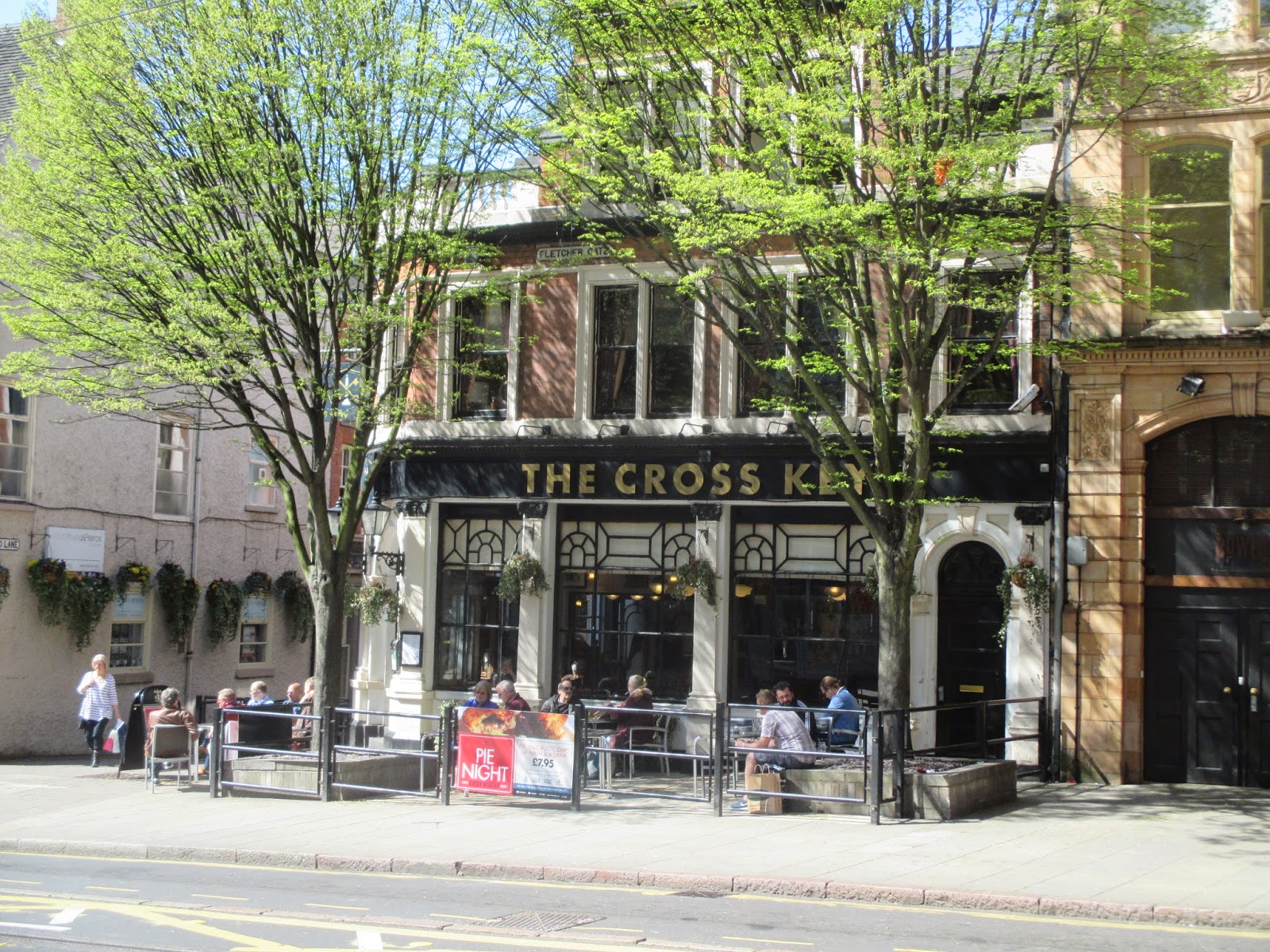 I then headed back to my planned start point, Annie's Burger Shack, in the heart of the Lace District, and a perfect place for lunch.  This place is awesome, combining the best in British beer with the best in American food.  It was already busy with diners and the doors had only been open 10 minutes.  I looked along the row of 10 handpumps and noticed a few breweries I recognised such as the wonderful Thornbridge.  However, my eye was caught by a beer called New World (3.7% ABV) from Shiny Brewing.  I asked the young lady serving about the brewery but she could not tell me much but I ordered a pint to go with a Hawaiian burger (one of a choice of 30 different burger options).  Whilst enjoying the lovely crisp, citrussy, refreshing light pale ale I discovered that Shiny Brewing are based in nearby Derbyshire.  Shortly afterwards the young lady who served me came up and told me what she had found out about them too.  Excellent service.  If you like burgers and an excellent range of beer from local micros this place is for you.  First class in everything they do. 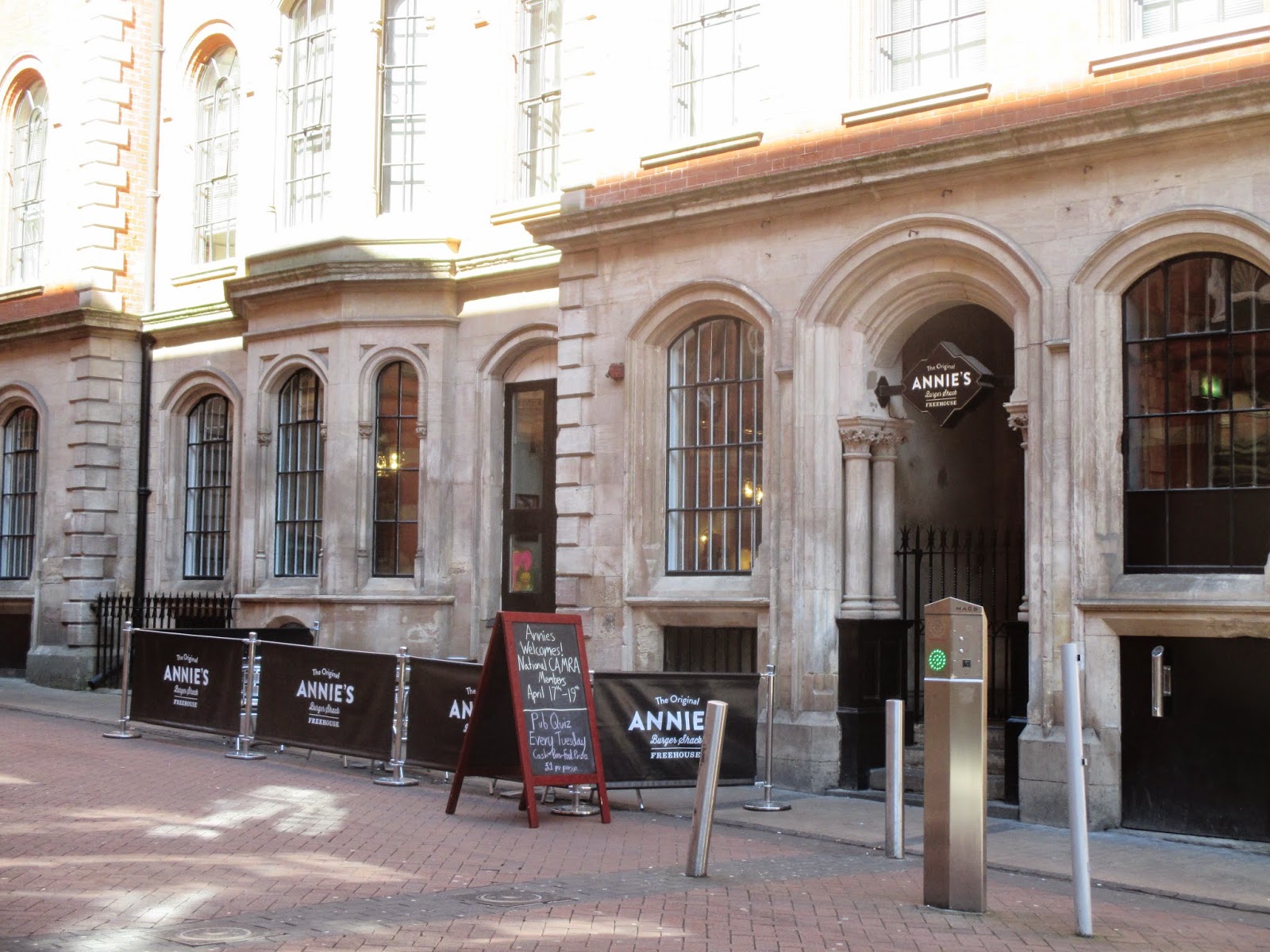 Now I was wondering whether to go to the AGM and listen to one or two debates or enjoy a stroll around Nottingham popping into the odd pub or two.  My plan was to meet up with an old work colleague, Martin, later on, as well as meeting up with Dawn and Scott, my sister and her other half, who I was staying with in Loughborough.  Now if it had been raining the AGM may have won but it was a beautiful day.  I decided to walk around Nottingham and headed over to the castle.  On the way I popped in to Langtry's.  A typical city centre boozer with a range of beer consisting mainly of national brands.  I tried a half of Nottingham Legend (4.0% ABV), the only local beer on offer.  The pub was OK for a quick drink but the beer was not to my taste.  I found it strangely aromatic and sweet with very little hop character. 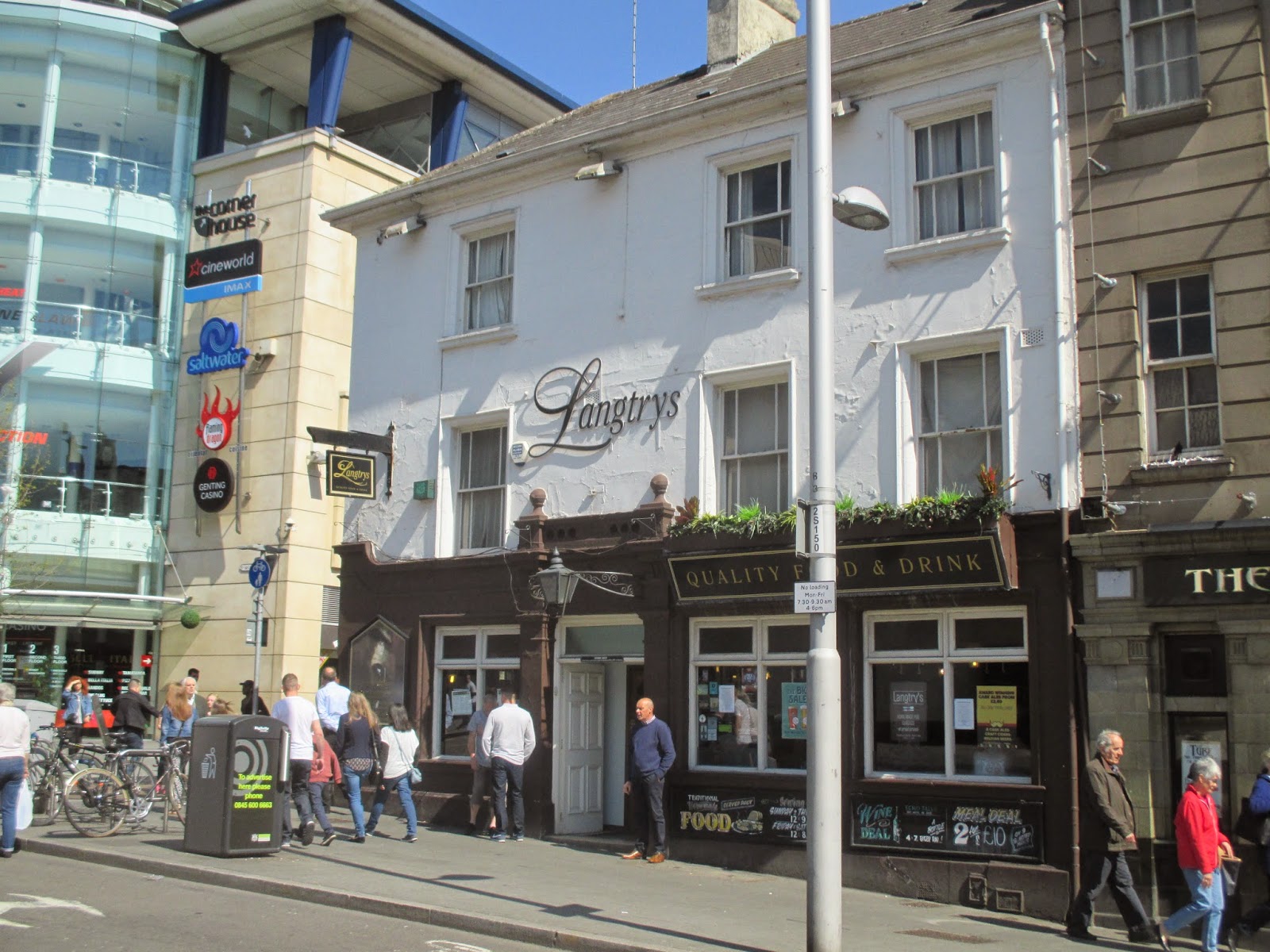 I then took a break from drinking and walked around the area of Nottingham Castle.  I noted one or two pubs I planned to go in later as well as seeing the famous 'Old Trip' pub, now owned by Greene King.  This small area alone had a number of pubs worth going in.  I was due to meet Martin at 5.00.pm in the Lincolnshire Poacher.  That meant hauling myself back across the city and on my circuitous route I spotted the Brewdog bar.  I didn't expect to see any CAMRA diehards in there and I was right.  In fact, it was empty although it did fill up while I was there.  I've enjoyed a few Brew By Numbers bottled beers recently so I opted for their 01/07 Saison Nelson Sauvin (6.0% ABV).  Tart and bitter it was a lovely beer to enjoy slowly whilst keeping track of the afternoon footie. 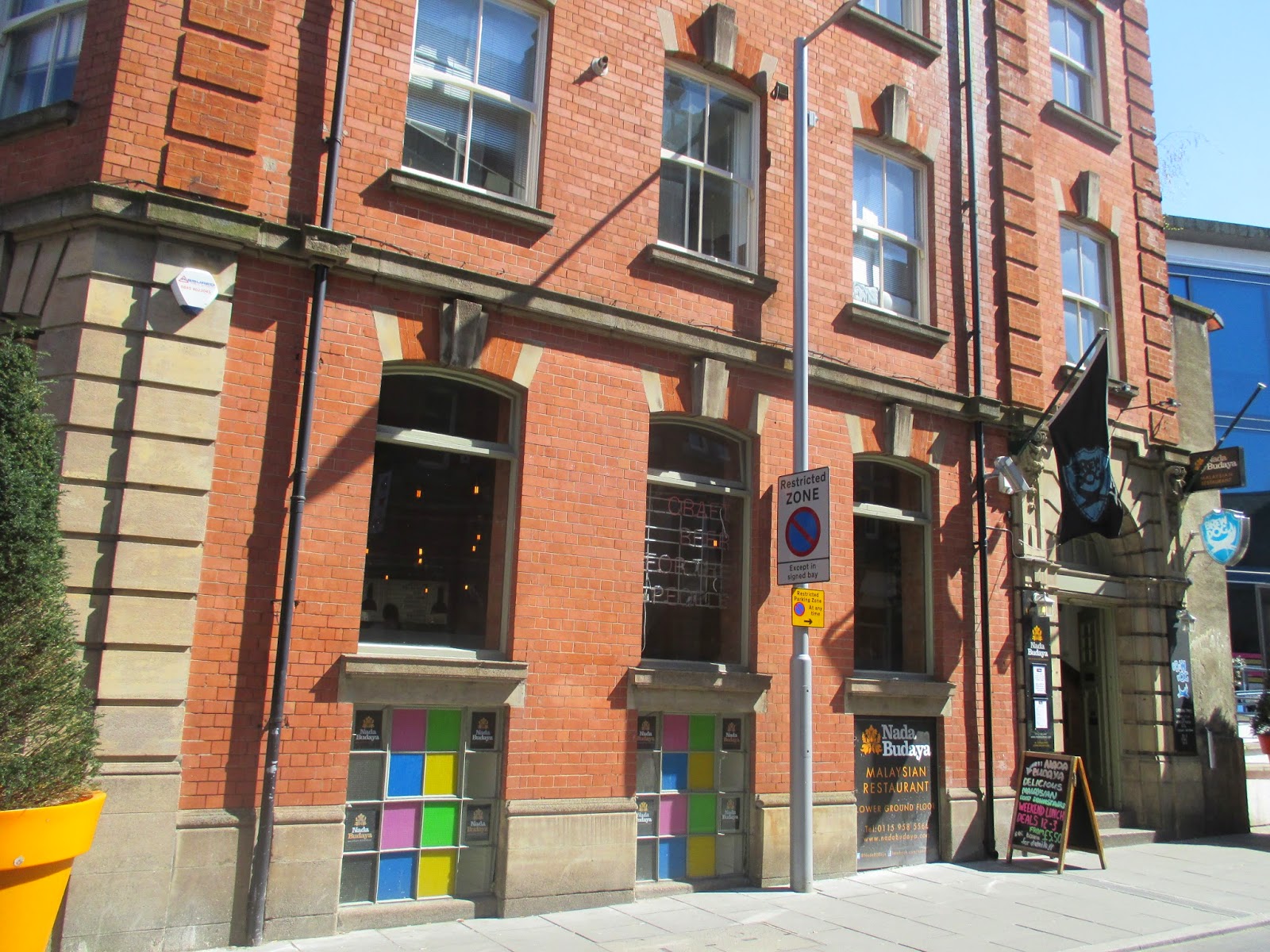 When I arranged to meet up with Martin for a drink I remembered him extolling the virtues of the Lincolnshire Poacher.  Martin lives in Eastwood, a few miles out of Nottingham, but this is one of his favourite pubs.  I can see why.  Heading out of town on the Mansfield Road, it is an unassuming pub that is part of the Castle Rock empire.  As well as the full Castle Rock range it also has a superb range of beer from other local micros.  I opted for a Phoenix (4.8% ABV) from the local Newark Brewery after Martin had given me a tour of the multi-roomed pub.  Two front rooms, a snug, a conservatory and an outside walled garden.  The beer was a rich malty russet coloured ale that was quite pleasant.  It was certainly better than my next beer, the Castle Rock Screech Owl (5.5% ABV).  As with the Navigation Apus, it was too floral and aromatic for my taste with none of the tropical fruit flavours or citrusy bitterness I associate with an American IPA.

We stayed for a third before I had to go and meet up with Dawn and Scott and once again I headed over to Derbyshire for a Black Iris Homeward Bound, a craft keg 7.2% ABV double IPA.  This was indeed a lovely beer.  Martin was enjoying a Castle Rock Sherwood Reserve, an excellent 4.5% ABV stout which I should have chosen instead of the Screech Owl. 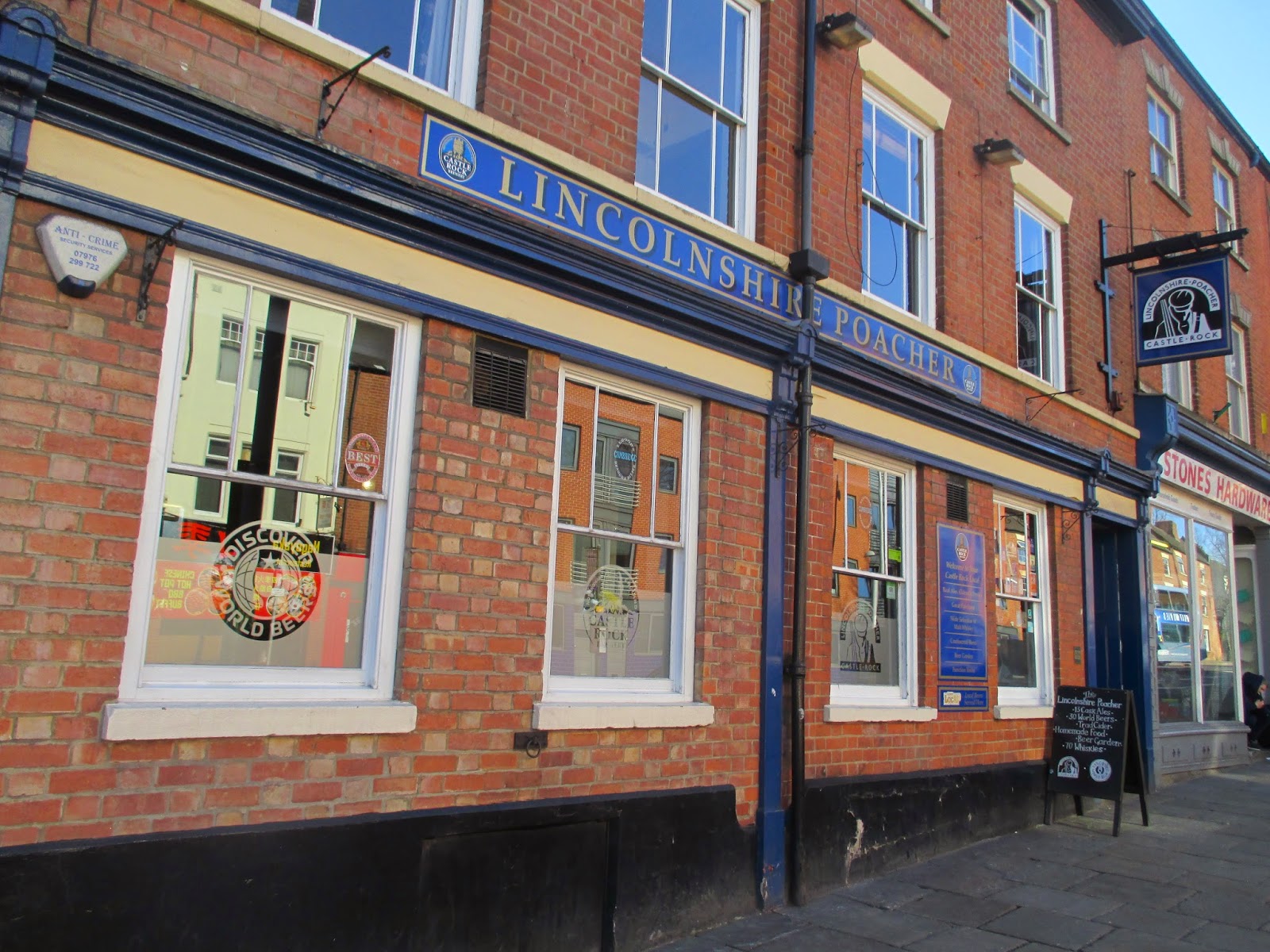 It was time to meet Dawn and Scott at the Hand & Heart, a pub close to the AGM venue.  Martin decided to come along and catch a later bus (the 8.10).  The Hand & Heart had a mini beer festival as well as their handsome regular range of ales.  I went over the border into Derbyshire again and chose a St Bernard from the Intrepid Brewing Company, located in the heart of the Peak District.  Brown ales aren't my thing so not the best choice but it was drinkable.  The cheese & onion rustic roll was the size of a small loaf and went down better and all of this was swiftly followed by a Red Eye PA (5.2% ABV) from the Maypole Brewery, another Nottinghamshire micro.  This was gorgeous and the best beer of the day and by far the best beer from Nottinghamshire.  Martin was now scheduled to catch the 9.10 bus!!

We were sat upstairs in the Hand & Heart on a large table and, being close to the AGM venue, we were soon joined by a boisterous group from Yorkshire who told us a few of the highlights of the AGM.  They assured me I had missed nothing.  It's a large and literally cavernous pub because it is built into the sandstone so at the back it is a cave.  This cave at the rear contrasts with the Victorian frontage.  This frontage is further 'enhanced' by the glass conservatory above that was added in the 1980s.  A top class pub with excellent food and a great range of beer. 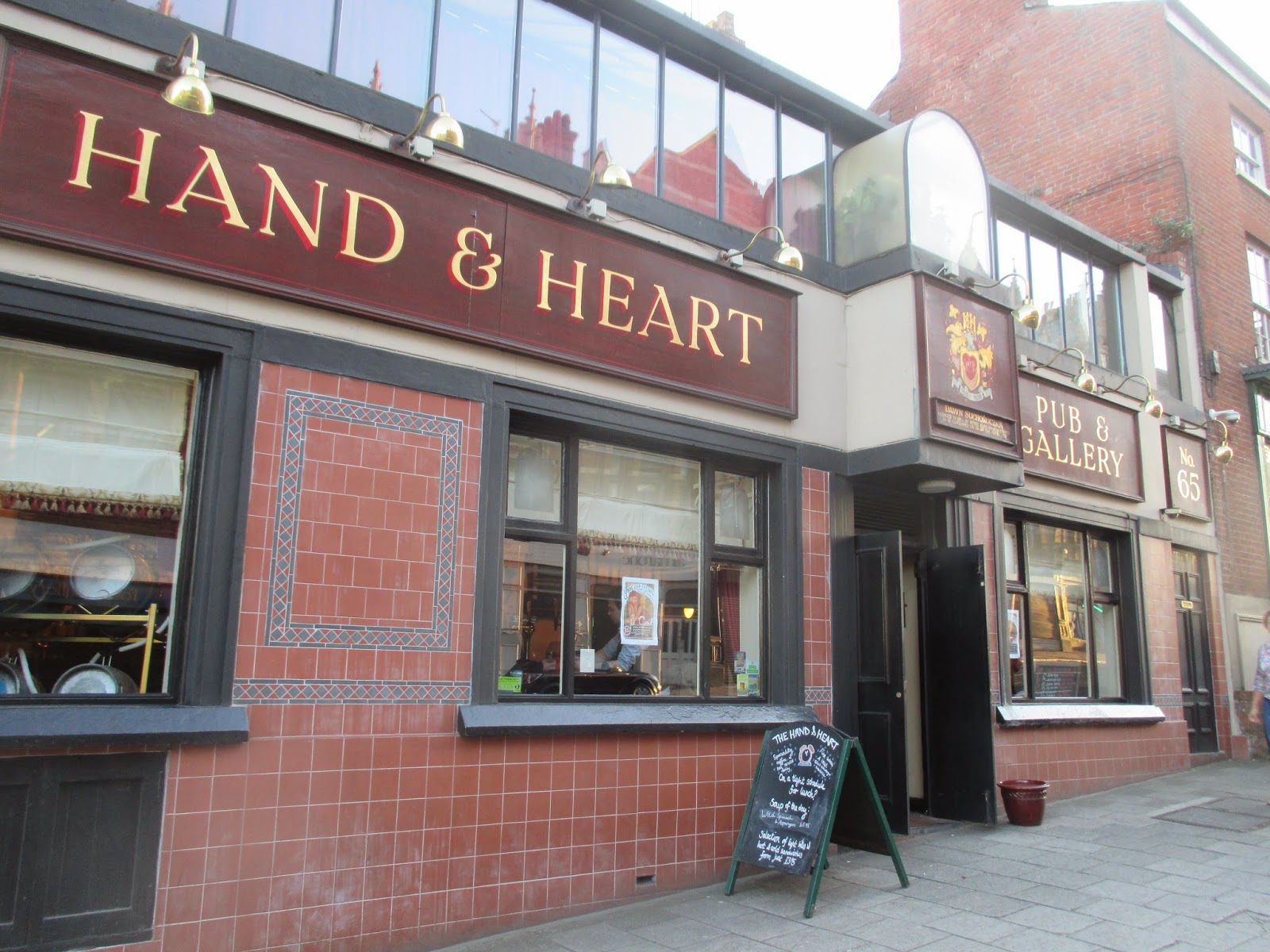 Next stop was the new city centre micropub, the Barrel Drop.  Martin decided to stay with us and catch the 10.10 bus home!!  His wife had said to him 'I suppose I will see you when I see you' which I translated for him to be 'stay out as long as you want and have fun'.  I had popped into the Barrel Drop the evening before after checking in at the AGM and was immediately impressed.  It is down a very narrow alleyway called Hurts Yard and for a micropub it is fairly large and it has a bar, behind which are about a dozen barrels so plenty of choice.  The guys running it are a young lot which is great to see and they were being rushed off their feet to serve everyone.  I was back in Derbyshire as I chose a delightful Euro IPA (5.6% ABV) from the Raw Brewing Company.  In fact it seemed that I was constantly switching between these two counties.  The previous evening I had enjoyed a porter from South Yorkshire's Stancill Brewery (4.4% ABV).  Plenty of chocolate notes with this one and a lovely bittersweet finish. 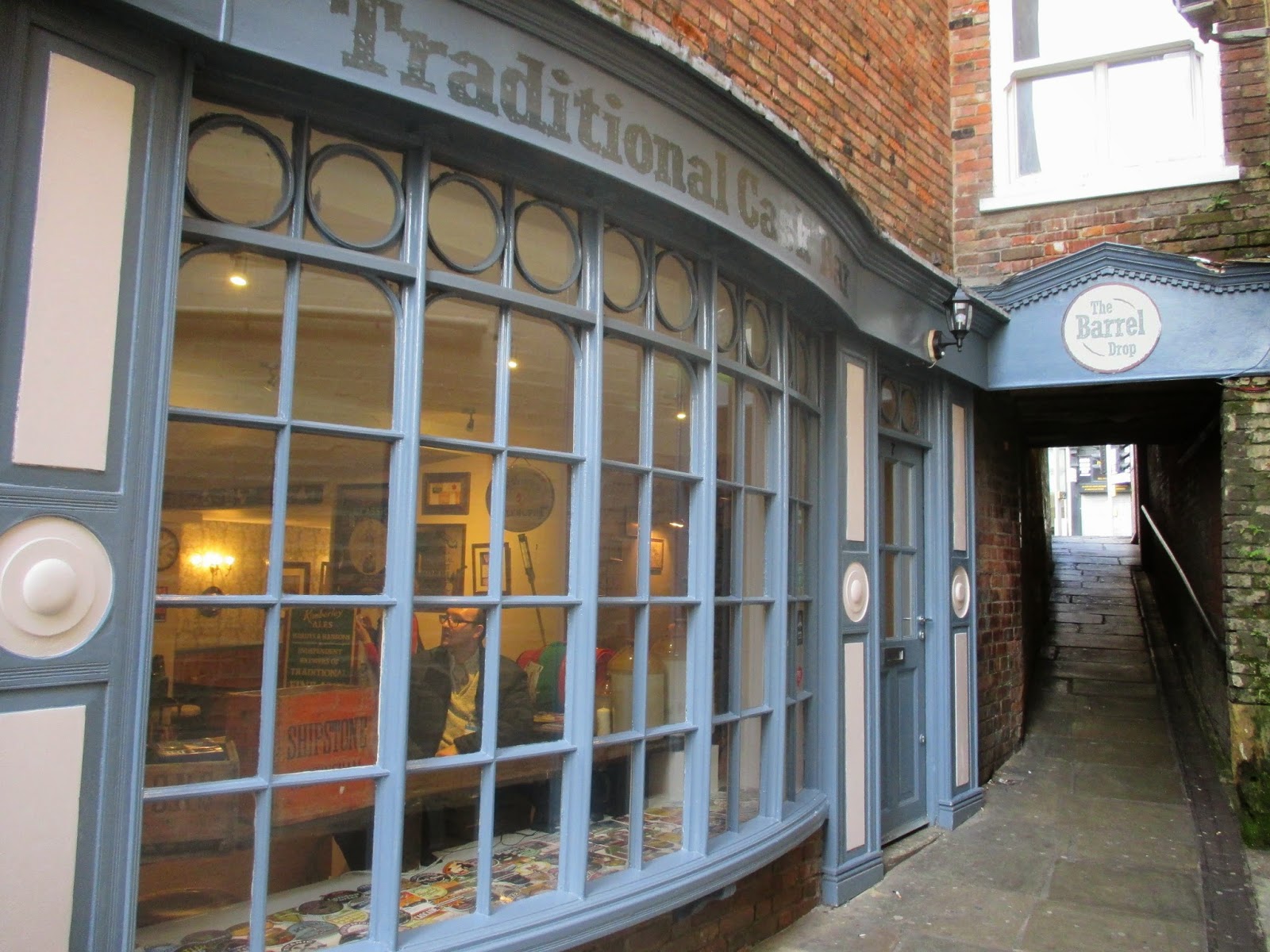 The Barrel Drop is a first class micropub.  There are three distinct areas.  A small snug on the right as you go in.  A larger room off to the right at the rear and a central area with small amounts of seating and standing room.  The list of beers are chalked up on a board to your left as you enter.  If I lived in Nottingham I would make this my local. 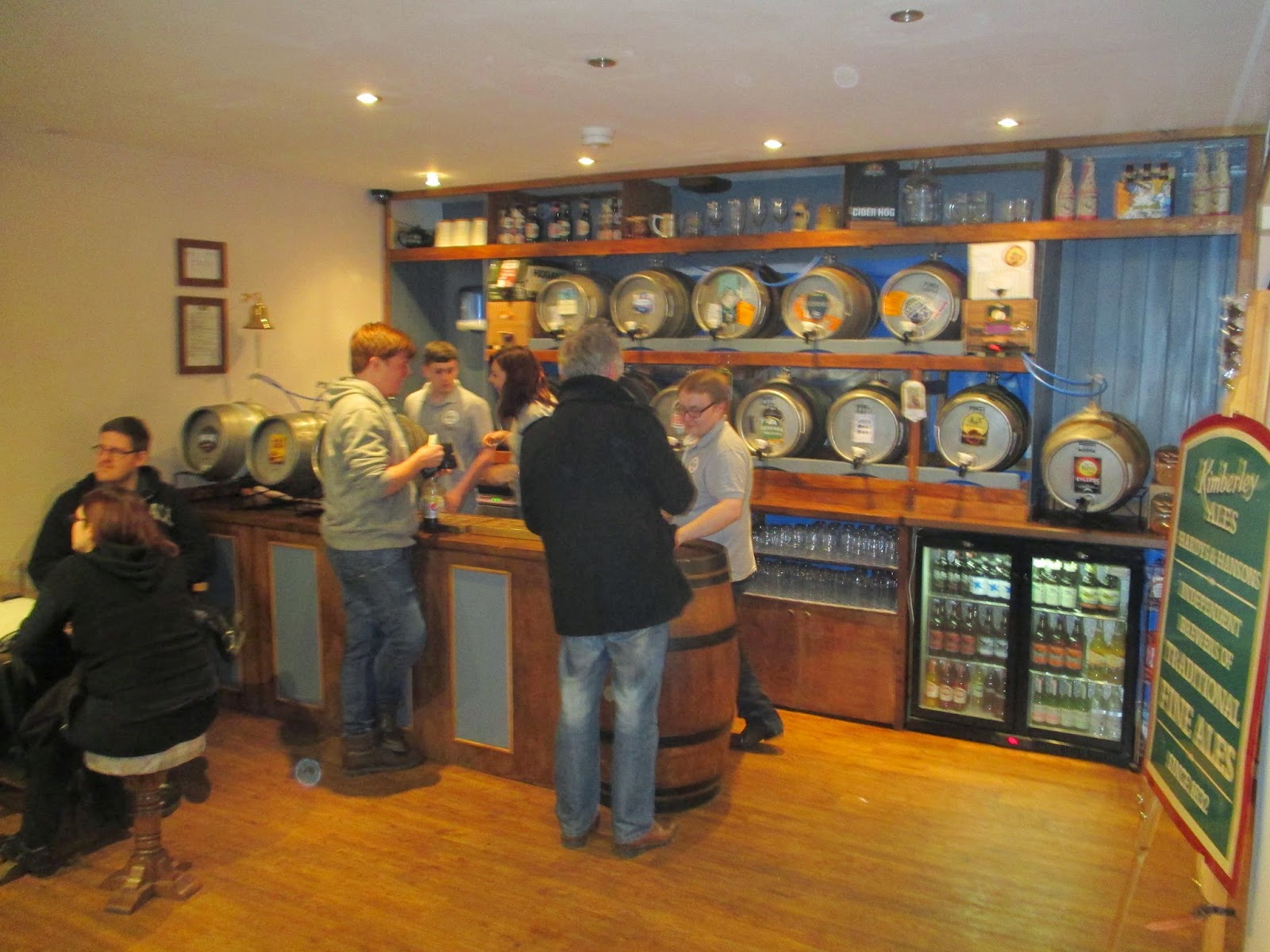 Martin finally called it a day so he missed out on the Crafty Crow.  This superb pub is located opposite the entrance to Nottingham Castle.  A central bar area with wraparound seating on two different levels.  All very modern and stylish.  We made this our final stop as I was beginning to tire and poor Scott was suffering from man flu. 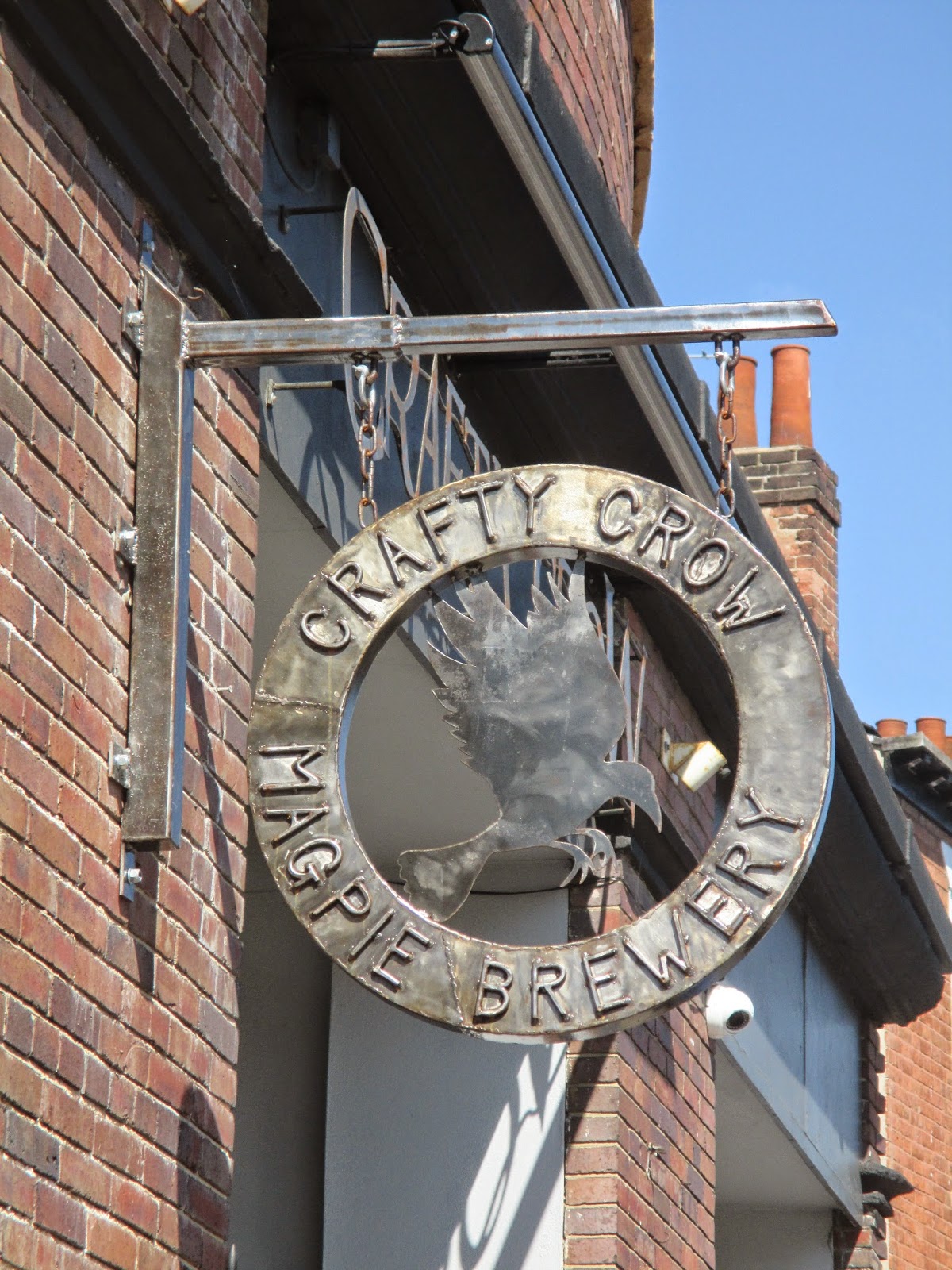 The Crafty Crow is owned by the Magpie Brewery.  There are 10 handpumps and only two are from their own brewery so it is a more like a freehouse with beers from independent micros both local and nationwide.  Add to this 8 rotating craft keg lines and you have a beer paradise.  This pub is not far from the Barrel Drop so perhaps they are the only two pubs you need.  I went for a Magpie beer, Huginn (5.6% ABV), which is an interesting and complex IPA.  An excellent end to a fantastic day of drinking. 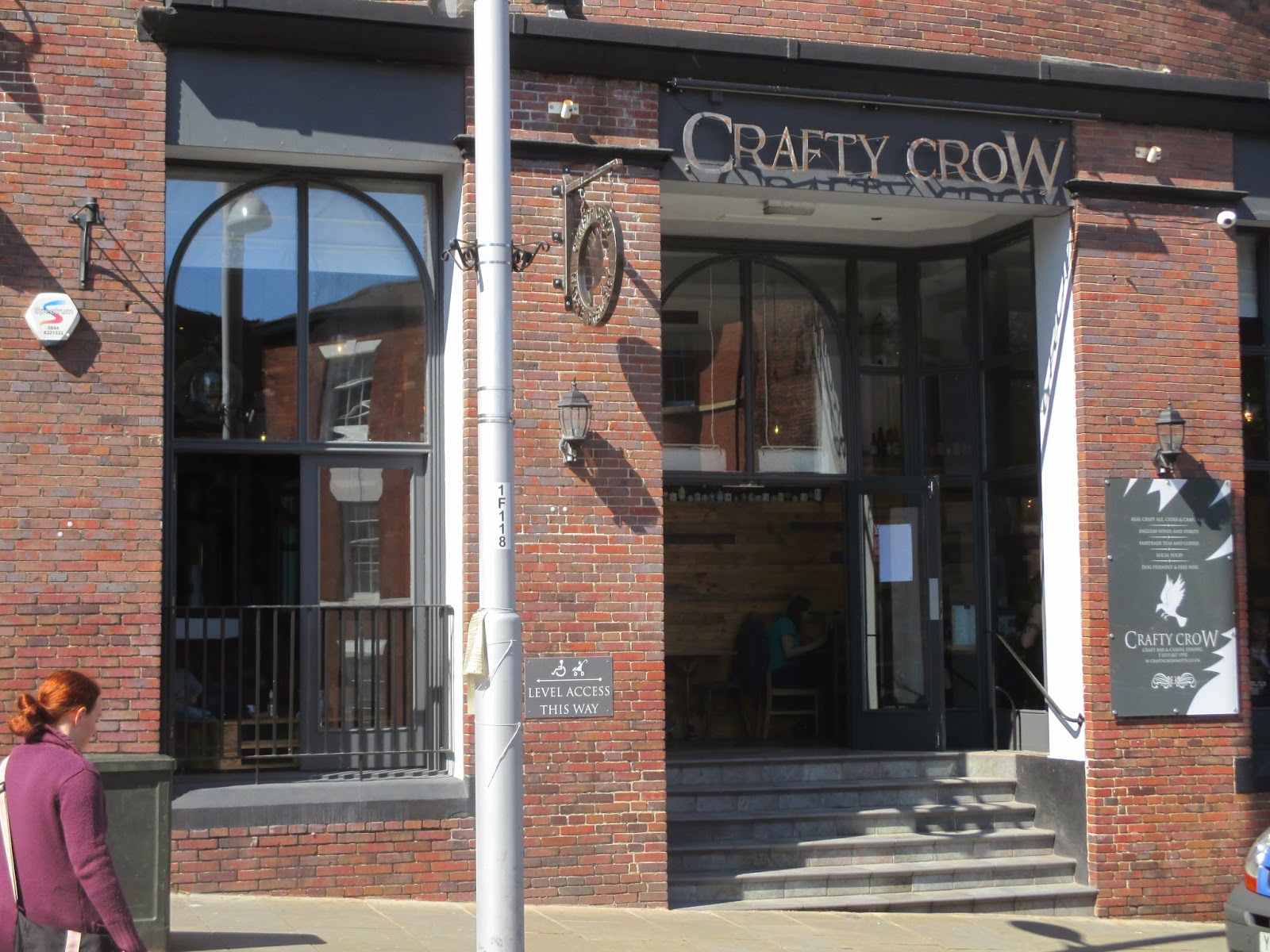 This was my first real drinking tour of Nottingham and the city is full of excellent pubs.  I did not always have success with the local beers, in fact the Derbyshire beer seemed more to my taste, but this was rectified towards the end with some crackers from Magpie and Maypole.  A couple of pubs that I missed but did not have time for were the Canalhouse and the Malt Cross.  It is always good to have a reason to go back though.