We moved to the village of Yapton, West Sussex, in July 1997 and it was the following year when I realised what a really great village it is.  The village hall is only a few hundred yards from where we lived and it was in the spring when I noticed the CAMRA Beerex posters going up.  A beer festival at the end of our road in the middle of May.  Sounds like heaven.  When we moved from Yapton in 2005 this was the one village event I really missed.  However, we are now back living in Yapton (the same house too) and the beerex is still a regular May event. 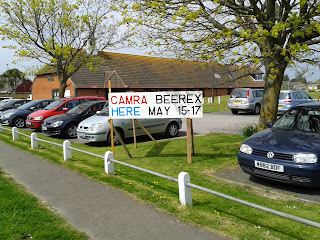 Yapton Beerex is run by my local CAMRA branch which I am now an active member of.  In the past I have only ever attended as a customer.  Last year I had to miss the event altogether due to illness so this year will be my first as a volunteer.  The festival normally coincides with the FA Cup final and in the late 90s and early 00s I would enjoy a pleasant lunchtime at the festival before falling asleep in front of the big match.  As the years went by we would suddenly have friends wanting to come and stay with us in the middle of May for some strange reason and the festival became much more sociable.  Even my mum still vividly remembers her first Yapton Beerex.


The Saturday lunchtime session is the one to try for if the weather is good.  All you have to do is catch a train to Barnham station and then hop on the vintage open top bus which will transport you to the festival just over a mile away and when you have spent a pleasant few hours drinking whilst soaking up the sunshine on the village playing field you can get the bus back to Barnham and your train can take you home to sleep it all off.  Until I moved away from Yapton in 2006 I could obviously just stagger home and then be ready to go again in the evening.  Perhaps this is the reason why I was so enthusiastic when we decided we needed to move back to Yapton.


Of the 60+ beers there will obviously be many from Sussex but we have also gone further afield to obtain beers from Acorn, Arbor, Ayr, Boggart Hole Clough, By The Horns, Highland, Hopcraft, Hopstuff, Lincoln Green, Magic Rock, Mallinsons, Redemption, Revolutions, Roosters, Stewart Brewing, Tiny Rebel and Windsor & Eton as well as others I haven't mentioned.  Ciders, perries and international bottled beers will also be on sale too of course and food will be available to soak it all up.  The beer prices begin at just £1.20 for a half pint and CAMRA members will get £2 of free tokens.  All in all a very attractive package.

One unusual aspect of this festival is that only half pint glasses are available so you are forced to enjoy more of the 60+ beers that will be available.  This year we have also drawn a third pint line so you can try even more.  Yapton Beerex has the slogan 'Every May Be There' so if you are thinking you would maybe like to go then it is the place for you.  Make yourself a definite and head off to Yapton this weekend (15th-17th).