12 Beers Of Xmas No.3 - Ot The Explorer Double IPA

My wife is out tonight so I get this one all to myself.  She is not a particular fan of IPAs though so that's probably not a bad thing.  For day two I headed to Wales and met up with some Celtic druids.  Today I am in the Netherlands and drinking a beer in praise of the king of all Dutch beer hunters - Ot Louw.  Ot likes them bitter apparently so this double IPA is packed with American hops (Colombus, Simcoe and Centennial).
I took to Dutch beers in a big way over the summer during my World Cup of beers.  The best of these was an imperial passion fruit white IPA (7.8% ABV) and yes it is as good as it sounds!!  This beer was not 100% Dutch as it was a collaboration between Ilkley Brewery and the two Dutch brewers of Rooie Dop and Oerseop and this was more than good enough to win my golden pint award for best collaboration of 2014.  It also meant I was determined to add a beer from Rooie Dop into my 12 Beers of Xmas and this one from Beer Hawk sounded perfect.
Rooie Dop was born in 2012 by Mark Strooker aka The Dude.  He experiments in a wharf cellar in Utrecht and the big batches are then brewed at De Molen in Bodegraven so until he gets his own big plant he is a bit of a gypsy brewer.  They are already exporting to twenty countries and doing collaborations all over the world so The Dude must be a busy man.

Enough of all this talk.  Time to test this 8.7% ABV double IPA.  I have built this brewer and beer up so much now it had better not be crap.  To be honest though with this cold it will have to be potent for me to smell or taste anything.  However, this is a really nice beer.  It has a lovely fruity aroma of mango and pineapple.  There is a sweet malty boozy base over which the tropical fruit flavours swirl around before you reach a somewhat bitter finish.  A perfect double IPA even with impaired senses so another 10/10 beer from me. 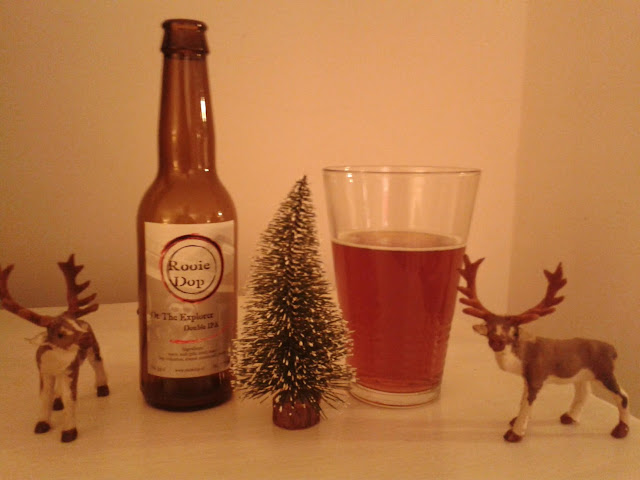