I do not normally frequent supermarkets and when it comes to beer I try to drink in pubs or purchase my bottled beers from independent specialists.  However, I am always willing to try new beers and the Sainsbury's Great British Beer Hunt 2013 offers a range that is not normally available in supermarkets so I was happy to pay my local a visit to see what I could find.

Twenty beers have been short-listed by beer experts (?!?) from an initial entry in excess of 150 beers.  The twenty finalists are composed of five beers from four different regions so if I am sampling the best of the entries here then I expect some top quality beers to be in my glass.  I did not find all twenty beers but I did come across fifteen and I will get round to reviewing these over three separate blog posts.

So here goes then on the Great British Beer Hunt 2013 Part One and I am beginning my journey in the South West of England.
1.  India Pale Ale - Harbour (5.2% ABV)


Bottle number one comes from Cornwall.  Harbour only began brewing only in 2011 and this deep golden IPA certainly has a strong citrussy aroma.  This is reflected in the initial taste which is very heavily grapefruit.  The finish was a little sweet and refreshing but all the time there was a strong underlying sharpness of grapefruit.  I loved it but perhaps it was a little one dimensional.  The citrussy grapefruit notes were totally dominant.  A good start though and I awarded it a score of 8/10. 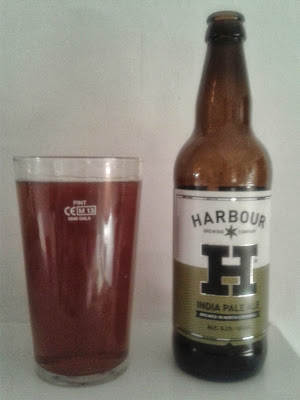 
The second bottle again comes from Harbour.  I love porters so this was something I was really looking forward to.  The colour was black of course and there was only a subtle hint of roasted malts with those distinct chocolate and coffee notes.  The flavours that came through strongly for me were of plum and raisin with a hint of liquorish.  It was deliciously sweet in fact and very full-bodied.  The finish was sweet and incredibly smooth.  If there is a better beer than this in the competition I will be surprised and delighted and I awarded it a 9/10.  This beer was a big hit with my wife too. 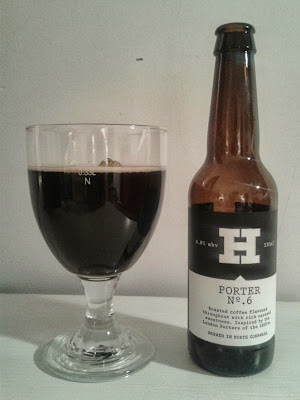 
Bottle number three took me into Devon with a golden beer from Hunter's who began brewing in 2008.  This was brewed using the classic English hop Goldings and added to the mix was a late addition of Citra.  This addition was obviously responsible for the absolutely amazing aroma but there was not much evidence of it in the taste surprisingly.  A peach fruitiness was evident initially with some nice spicy notes coming through but there was little aftertaste.  It just sort of fizzled out sadly and so I awarded it a score of 6/10. 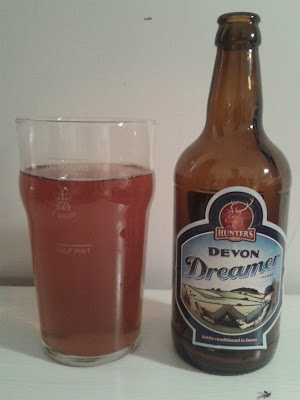 
For my fourth bottle I crossed the border into Wales but I was staying in the South West.  The Gower Brewery began operations in 2011 and the beer poured beautifully giving off a superb golden colour.  It is a classic balanced bitter with a slight citrus fruit aroma.  The taste was a little more more sweet than bitter and the finish was a little spicy.  It is a good example of this type of beer but I am not a huge fan of balanced golden ales.  I awarded it a score of 7/10. 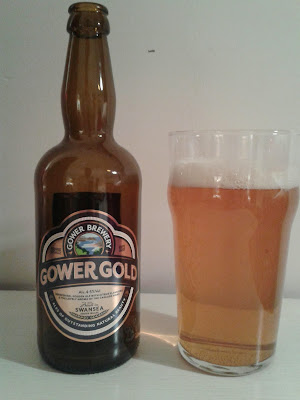 
My final beer in this region took me into Oxfordshire.  I have tried some smoked beers that have been quite disgusting and only one, Celtic Smoked Porter from Okells (4.7% ABV) on the Isle of Man, has hit the spot with me.  Sadly, this entrant comes under the 'not-so-good' category.  The aroma was very smokey as you would expect but the beer had no body at all.  It tasted quite medicinal.  Some sweetness with notes of bonfire toffee came through but quickly disappeared to give quite a sour finish.  My wife hated it with a passion and couldn't work out why I gave it such a high score of 3/10. 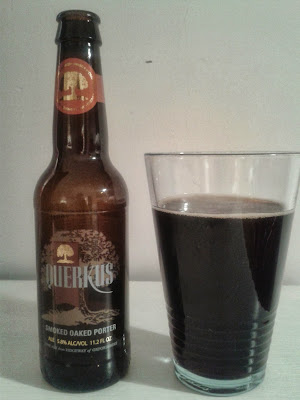