My local branch of CAMRA (Western Sussex) holds a beer festival in Yapton every May. It's a lovely festival with about 60 different beers available and all beers can only be bought by the half pint ensuring the punters try as many different beers as possible.  On a sunny day the drinkers can sit out on the village playing field and soak up the sun making it even more pleasant.

Each year the festival goers are asked to vote for their top beer and when all votes are counted the brewery is contacted with news of their success and a trip is arranged to present the award.  This of course means a brewery trip for all branch members who wish to go and I am not the sort of person who could turn this down.


This year the winning beer was Trinity (3.0% ABV) brewed by the Redemption Brewing Company based in NW London.  I have never tried this beer (or anything else from Redemption) but I am told it is a very hoppy tasty beer for such a low alcohol content.   Sounds perfect. 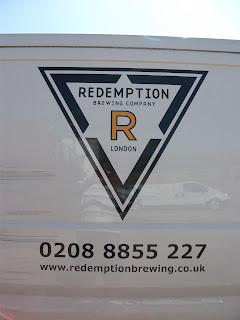 The brewery is located in an industrial unit a short bus ride and walk from Seven Sisters tube station.  We were met  by brewer Andy Moffat who welcomed us with instructions to help ourselves to some beer.  This kind of welcome always works well.  Three polypins had been set up for us.  Sadly none of these contained the award-winning Trinity.  This was in one of the conditioning tanks and Andy did pour some into a jug for us but it had a few days to go before it would have been ready really.  I had a small sample but the combination of my heavy cold and the condition of the beer meant it would be pointless for me to pass judgment on it. 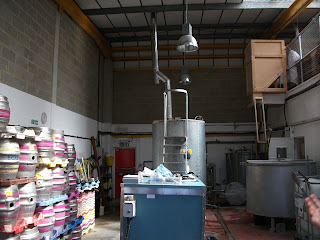 The first beer I tried was Rock The Kazbek (4.0% ABV).  This had a light golden colour to it and it had a very bitter hoppy taste.  I must add my disclaimer here.  This was my first alcohol for 5 days and my taste buds were probably playing tricks on me and I could not really smell anything.  However, I loved this beer. It had a sharp spiciness to it with plenty of citrussy notes coming through.  The bitterness was heavy throughout.

For my next beer I chose the Pale Ale (3.8% ABV).  In comparison to the Rock The Kazbek I found this beer to be a little tame.  I think I should have tried them in reverse order really.  It had a pleasant floral hoppiness along with a pleasing mellow bitter finish to it.  Certainly a decent session bitter but I much preferred the stronger bitterness of Rock The Kazbek.

My final beer to try was the Urban Dusk (4.6% ABV).  This beer had a lovely clear chestnut colour to it and was totally different to the two previous hoppy beers.  Plenty of maltiness with this one with toffee and caramel notes.  Brewed with the Bramling Cross hop there was some earthiness to it in the finish too. Nothing at all to dislike here.

With my third pint in hand, Andy took us around his small brewery.  Redemption began  brewing in 2010 which makes it quite old relative to many of the new London craft breweries that are now springing up.  The twelve barrel plant was purchased from Slaters Brewery of Staffordshire and all production is sent out in casks.  The process may be traditional but the strong use of hops and the sourcing of only the finest ingredients ensures the production of cask-conditioned beers for the drinker of today.  Judging by their growing number of awards it is a philosophy that is working well.

The mashing process is normally done at 65-67 degrees from what I remember except for Trinity which is done at a considerably higher temperature of 72-73 degrees to get maximum flavour into this low alcohol beer.  In the fermenting room there was a one-off beer being brewed for Geronimo Inns, a London gastropub chain.  It will be a single hopped beer (Bramling Cross) at an ABV of 3.8%.  Judging by our small pre-conditioned sampler this could be an interesting beer although it is highly unlikely I will get to sample the finished product.

Andy was the perfect host.  He is obviously passionate about what he is doing and I will look forward to trying more of their beers whenever I get the chance.  After the tour it was left to our branch chairman, Phil, to present Andy with his award along with a round of thanks for his hospitality.

Following our visit to Redemption we made our way to Stoke Newington.  Our branch secretary had the itinerary of pubs to visit and we began at the Jolly Butchers.  Under normal circumstances a pub crawl around North London would have been a very welcome way to complete the day out.  With my cold still requiring at least a couple of days to clear though I made this my only stop before heading home.  However, if you can only visit one pub in this area you could wish for nothing better than the Jolly Butchers.  It has the appearance of a traditional street corner London boozer.  Architecturally it has obviously retained many of the amazing features it possesses but it has been transformed into a modern bar for the lover of good beer (keg and cask) and cider.  The choice of beer is immense and it was good to see that the selection was dominated by many of the new London craft breweries that I keep hearing about.   I must make a special to visit to this pub at some time because it has everything a beer lover desires.  After only one year in business it is easy to see why it is already CAMRA nominated and that is also features in The Guardian's Top 10 pubs in Britain.

I chose a pint of Shamblemoose #4 American Brown (5.3% ABV) to round off my drinking day.  This very new brewer is unknown to me but it seems they are sharing the facilities of Late Knight Brewery in Penge, SE London.  They are attempting to brew traditional American style craft beers and having just been over to New England I can confirm their American Brown would not have been out of place over there.  It had plenty of caramel flavour from the malt but there was a hoppy hit to it too.  I will have to check out this brewery some more for sure.

The conclusion I made from today was I must visit London more often.  It is full of exciting new breweries and the only concern is whether there are enough pubs like the Jolly Butchers in which to buy these beers. London has the breweries but judging from the Tottenham area it now needs more pubs.

Happy drinking.
Posted by Unknown at 12:51