Last night the local CAMRA crew headed out to deepest Sussex.  The first stop was The Half Moon Inn.  This pub is on the main A283 in the village of Northchapel a few miles north of Petworth.  The second pub in the village is currently closed so surely the sole remaining village local will be full of thirsty locals.  The car park certainly suggested life but upon entering we were met with a grizzled landlord and one local watching TV together in a darkened bar.  The landlord didn't appear to be too happy to see some customers as he poured our pints.  The choice between Palmers IPA from Dorset and the local Hammerpot Harvest didn't appear to be too bad.  I chose the local beer.  Bad choice or probably the lesser of two evils judging by the comments from those who chose the Palmers.  Slightly fruity bitter but the harsh taste and lifeless character did nothing for me except make me wish I'd only ordered a half.  I could only give it a 4/10 at best.  The last beer I ordered from Hammerpot was a delight so hopefully this is a one-off. 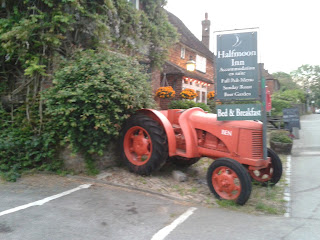 The pub itself is a delightful treasure trove.  The vintage tractor parked outside the front has been there for years.  Hanging from the ceiling in the bar is an enormous amount of antique artefacts ranging from old tennis rackets and snooker cues to agricultural tools.  There is a gorgeous fireplace and all around there are antique signs and objects to catch the eye.  This pub should be a bustling village local so it was very disappointing to see it so devoid of life.

From Northchapel we retraced our steps back to Petworth before heading across to Midhurst.  At Halfway Bridge, located amazingly halfway between Petworth and Midhurst, you head off to the left where you stumble upon the tiny village of Selham.  The Three Moles is set high off the winding road through the village so you have quite a few steps to climb up to the front door of the pub.  The Three Moles has long been a favourite pub of mine having been one of the pubs on the King and Barnes Ale Trail I completed three times in the early 1990s.  Back then it did no food and the excellence of this pub was maintained for years culminating in it winning the Sussex CAMRA pub of the year in 2002.  Once the then owner/landlady Val retired some years back it has gone through a few changes of owner and this was my first visit for many years.

The inside of the pub did appear to have been updated substantially.  It is a very small single bar pub but food is available now.  The one room has seating for probably no more than 40 customers.  It certainly doesn't have the homely feel it once had and when we arrived the landlord was about to close as there were no customers at all (it was just past 10.00.pm).  He was happy to serve us a pint from one of two beers available.  There was Betty Stoggs from the Cornish brewer Skinners (4.0% ABV) alongside Swift One (3.8% ABV) from the Hampshire micro Bowman Ales.  Once again I went for the local beer but luckily the owners were happy to serve us some more so I ended up trying both.

Bowman's Swift One was a nice hoppy bitter balanced with a biscuity malt character.  It had quite a dry finish I felt and it was certainly a pleasant beer without being spectacular and I'd give it a comfortable 7/10.  Betty Stoggs is quite widely available now nationwide but I rarely drink it as I've always found it to be little more than average.  How wrong could I be though?  Tonight I found it to be a robust fruity beer full of flavour and character and on this form I'd lift it up to an 8/10.

Our journey into the heart of West Sussex found the locals asleep.  The Three Moles is not quite the pub it once was but the new owners have only been there a short time and are trying to revive it.  This weekend they are holding a beer festival from a marquee in the lovely garden and the beer list we were shown was an interesting mix of local brewers alongside highly acclaimed London micros such as London Fields and Redemption.  I'm sure this will prove a big success as their beer festivals of old were always hugely popular.  If you are in the area I would check it out.