At the Norwich City of Ale there was a brewers market on the first Saturday morning and I picked up nine bottles from a range of five breweries to enjoy and review.  I have picked one beer from each brewery to review here and the remaining beers will be covered at a later date.

Norfolk Brewhouse began brewing last year using a 10-barrel plant.  They are based in Hindringham in the northern part of Norfolk.  For a relatively low alcohol content the Ruby Ale had a very rich taste with spicy orange notes along with caramel.  The name of the beer describes the colour to perfection.  There were delicious hints of roasted malts in the aftertaste.  It was so smooth it slipped down rather too easily.  This was a very satisfying beer and a fabulous start to my tasting session.  It was not difficult to give this beer a gold award.  Score 10/10 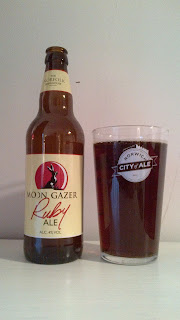 This brewery just north of Norwich in the village of Hainford began brewing in 2009.  Citraville is light golden in colour and is an American-style pale ale brewed with my favourite hop, Citra.  It had the familiar grapefruit aroma but the initial taste was more floral and lemony.  It also had a distinct dryness to it before giving in to a gentle floral finish.  I was probably disappointed by the lack of the expected citrussy hoppy hit but I did not prefer it over their excellent Cabarrus Gold.  Having said that it was still a very pleasant pale ale and very drinkable.  Score 7/10 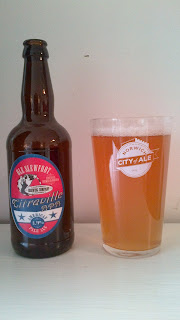 The Poppyland brewery is based in Cromer on the North Norfolk coast and it is a very new operation.  The beer I chose uses the New Zealand hop named Dr Rudi and it has been fermented with a Belgian saison yeast.  The beer came in a 375ml corked bottle and at a cost of £5.00 it wasn't cheap.  It had an appealing pale golden colour but the aroma was very sour and the taste was very strongly of bitter oranges.  I do not like marmalade particularly and this beer was a liquid version of it.  It had a complex refreshing finish to it that was quite pleasant but the overriding bitterness was never far away.  I could not drink alot of this beer.  Score 5/10. 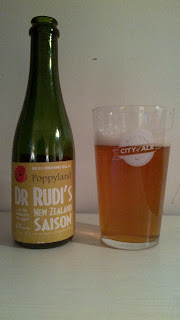 The Panther Brewery is based in the village of Reepham to the north-west of Norwich and began brewing in 2010 using the old equipment of the Reepham Brewery which ceased brewing in 2009.  The red panther is one of three beers I purchased and I chose the red first to compare it to the Moon Gazer Ruby.  It had a lovely malty aroma and the initial taste was one of burnt toffee and the rich malty aroma came through in the taste too.  It was actually quite mild with a distinct nuttiness in the aftertaste.  I cannot say that it matched the Moon Gazer Ruby but is was a lovely red ale with the same ruby colouring.  Score 8/10. 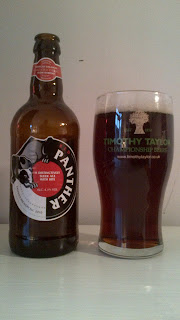 My final beer came from the Grain Brewery based in the south of Norfolk close to the border with Suffolk.  They began brewing in 2006 and upgraded to a 15-barrel plant last year.  As with the Panther, I purchased three bottles but chose the Redwood first to compare with the other red ales.  This beer was very different though.  The colour was more brown than ruby.  The aroma was strongly hoppy.  The initial taste was very fruity with hints of peach.  There were subtle hints of malt which balanced beautifully the hoppiness creating a rich smooth beer.  The finish was more complex.  This beer was an absolute delight.  Score 9/10. 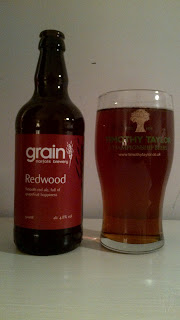