They say you should never go back.  When it comes to beer I think that's a dumb argument as pubs often thrive and develop and make themselves more appealing alongside new establishments that can offer something new.  I have worked in Stratford-Upon-Avon on and off for well over ten years and the pubs have always been OK and some have been very good.  With two weeks of working here again I spent the first evening trying the best pubs from previous visits alongside a new micropub that wasn't open when I was last here.


The Stratford Alehouse was my first port of call.  It is a compact micropub with plenty of tall wooden tables.  There is a small bar area at the far end with four beers served straight from the barrel.  From Great Heck we had both Dave and Christopher.  The former is a superb chocolatey nutty mild (3.8% ABV) but I have no idea why it is called Dave.  The latter is a gorgeous citrusy hoppy beer (4.5% ABV) packed with Colombus hops (you know why it is named Christopher now I hope).  In addition to these I tried a half of Uley Old Spot (5.0% ABV), a fabulous rich and sweet old ale which I last tried years ago and a half of Coventry bitter from Byatts.  Byatts was one of my favourite brewers from my last visit to this area and this session bitter is one of the best in this category.  Four excellent beers served straight from the barrel.  Exactly what I expect from a micropub. 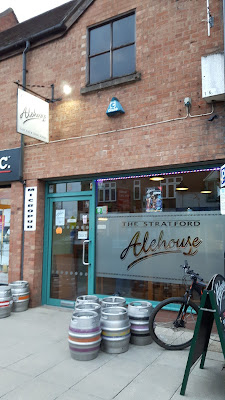 Around the bar area the wall was rammed with pump clips of all the beers they have offered since their opening a couple of years ago.  The pub has plenty of reading material with CAMRA magazines from all around the UK which had been left by previous customers alongside a selection of daily newspapers.  Once I got chatting with one of the locals, Dave (who was loving the beer named after him), there was no need to sit and read though.  This usually happens when I visit a micropub.  Phil was attending to our beer requirements behind the bar and Dave was full of praise for his beer knowledge.  Owner Bill arrived later and he has visited many micropubs around the country including my local ones in Sussex.  He enjoys his beer travels it seems while letting Phil run the day-to-day operations back at base.  I think I now have a good knowledge of all the locals who were enjoying a beer or two this evening and with two more weeks in Stratford I will be seeing more of them I am sure. 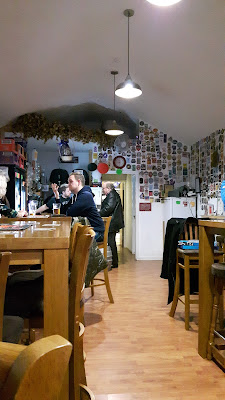 I did not spend all my time in the Stratford Alehouse.  I thought I would pop into the two other GBG pubs in town that were both firm favourites on previous visits.  The New Bulls Head is a lovely pub but the beer selection tonight was disappointing.  A couple of Tim Taylor beers and one from Ringwood alongside a Northern Line Stout from Portobello / Camerons.  The latter was my choice and it is a decent beer and served in top condition so no complaints at all except that it was the only beer I wanted to try.  This is a genuine backstreet local though and we need more pubs like this one.

Finally, I headed for the Bear at the Swan's Nest.  This pub within the Swan's Nest hotel (where I am staying next week) normally has up to 8 beers available.  The four regulars haven't really changed from my previous visits three years ago and the guest beers came from Banks's, Cottage and the local Stratford-upon-Avon brewery.  The latter I was keen to try but sadly, after attempting to pour a half, I was told it was off.  I was left with trying a half of Pacific from Cottage.  The poorest beer of the evening but I was told the SUA Brewery beer is a regular and will be on again shortly.  I will look forward to trying it next week.

My first evening back in Stratford was enlightening.  The pubs I loved had stood still and were offering nothing much that was new.  Certainly nothing in the way of the hoppy beers I have grown to love in recent years.  The micropub was a delight and I think I will be spending most of my pennies here over the next couple of weeks.  With the price of a pint at less than £3 for CAMRA members I won't need many pennies either to enjoy a blooming good pint.  There are other places to go too though and tomorrow I will be checking out my favourite pubs in Birmingham.