It's taken me a while to finally get to the new Brewdog bar in Brighton.  I have been to the ones in Birmingham and Nottingham and I wasn't overly impressed with either of them to be honest.  I think it is a case of both of these cities having superb real ale pubs that I love going in and a trip to Brewdog is taking away the chance to go into a pub I really love.  Perhaps that will also be the problem with the one in Brighton too.  The location does not put it on a circuit of Brighton's best pubs for me , in fact it is not near any of my favourites and I am someone who is not averse to walking a good distance either when it comes to beer.  It is on Grand Parade, the main road into Brighton that leads down to the pier and close to the Royal Pavilion but it is on the 'wrong side' so you have to cross this busy main road to get to it coming from the city centre. 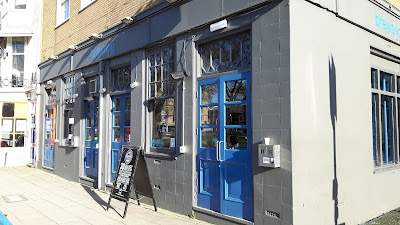 From the outside it looks a bit like the one in Nottingham if my memory serves me right.  Inside, it is a vast improvement although the decor and styling is quite similar in many ways.  A very industrial look but I particularly like the caged recesses.  Except for the red leather benches it is wood and metal everywhere it seems along with plenty of floor space. 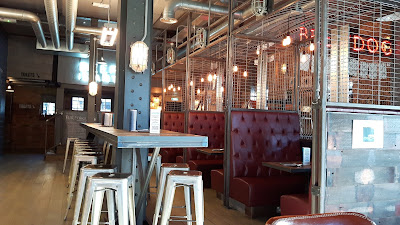 There was only one other customer and so I had both members of staff helping to serve me.  Both young ladies were friendly and knowledgeable and I was offered samples of anything I wanted.  There were probably well over 20 beers to choose from and ten of those were Brewdog beers as you would expect.  There were also some from the US and Europe too. 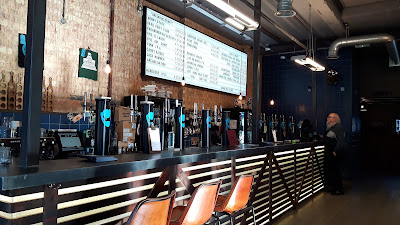 Two thirds of the Jack Hammer IPA (7.2% ABV) was requested and this cost me the best part of a fiver.  I don't actually have too much of a problem with the pricing in Brewdog bars really.  It is worth paying extra for quality and I would willingly pay more for many of the beers I drink to be honest.  Beer is a strange animal though.  You can go to a pub serving one or two decent beers alongside awful stuff such as GK and D*** B** and you pay a similar price for each.  Some beer I'd happily pay £4 a pint or more for whereas some stuff would be overpriced if they sold it for a quid it is so bad.  Anyway, all the beers here were not similarly priced,.  Some were just expensive but there were some really strong ones that were extremely expensive.  I would make a bet though that every beer was of the highest quality. 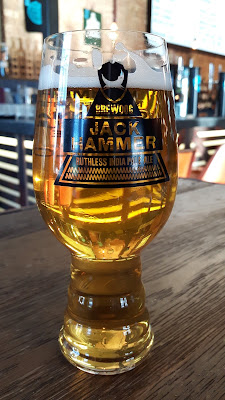 This was my first taste of Jack Hammer and it was a superb hop monster of a beer.  Very pale and very hoppy with a dry citrusy taste that I love.  Drinking this while listening to Pearl Jam seemed somehow quite perfect in this environment.  I also decided I must get a Jack Hammer glass because they look pretty cool and perfect for IPAs.

I followed this up with a two thirds of Baby Wheel (7.1% ABV) from Siren.  This gave me even less change from a fiver but my gosh it was worth every penny and more.  Probably my favourite beer of the year so far.  It is packed with English (yes English) hops although a few American hops were thown in at the end I was informed by the young lady serving me.  It was bursting with juicy tropical and citrusy fruit notes and tastefully wonderfully fresh.

So will I be adding the Brewdog bar to my list of pubs to visit in Brighton?  Highly likely.  I certainly prefer it to Craft Brighton, the only thing going for that place is the close proximity to my favourite Brighton pub, the Brighton Beer Dispensary.  Heading out of Brighton station and turning left down the hill skirting the North Laines you come across some cracking pubs though too and the Brewdog bar would be an excellent place to finish up before making your way back.