Firstly a bit of background to this post.  Due to my inclination to always try beer I have never tried before I do not drink a great deal of beer from any one particular brewery.  This has not always been the case and it got me thinking as to which brewery I have probably consumed most from.  I came to the conclusion it is probably King & Barnes.  During my three years of living in Horsham in the 1990s I completed the King & Barnes ale trail three times and most trips to the pub involved drinking their gorgeous Festive or one of their seasonal beers.


Following the closure of King & Barnes, Festive disappeared and Hall & Woodhouse only retained the average K&B Sussex in their portfolio.  I moved from Horsham down to the coast and this chapter in my drinking life closed.  It wasn't the end of the King name though.  A year after selling up to H&W, Bill King returned with his own microbrewery in Horsham.  WJ King recreated the magnificent K&B Old Ale and their premium beer, Red River, was close enough to the old K&B Festive for me to drink it whenever I had a chance.  He even launched his own annual ale trail of independent pubs in Sussex that sold his beers which I completed a couple of times.


WJ King was sold in 2010 and has undergone some rebranding under the new ownership.  Bill King took time off but I recently read that he has now bounced back with the launch of Firebird Brewing Company with Richard Peters, a guy he studied brewing with at Birmingham University thirty years ago.  After going their separate ways they got back in touch with each other to launch this new joint venture around the middle of last year.  I was therefore keen to check out this new micro so with a bit of time to kill when I was in the area last week I popped in to see what was going on. 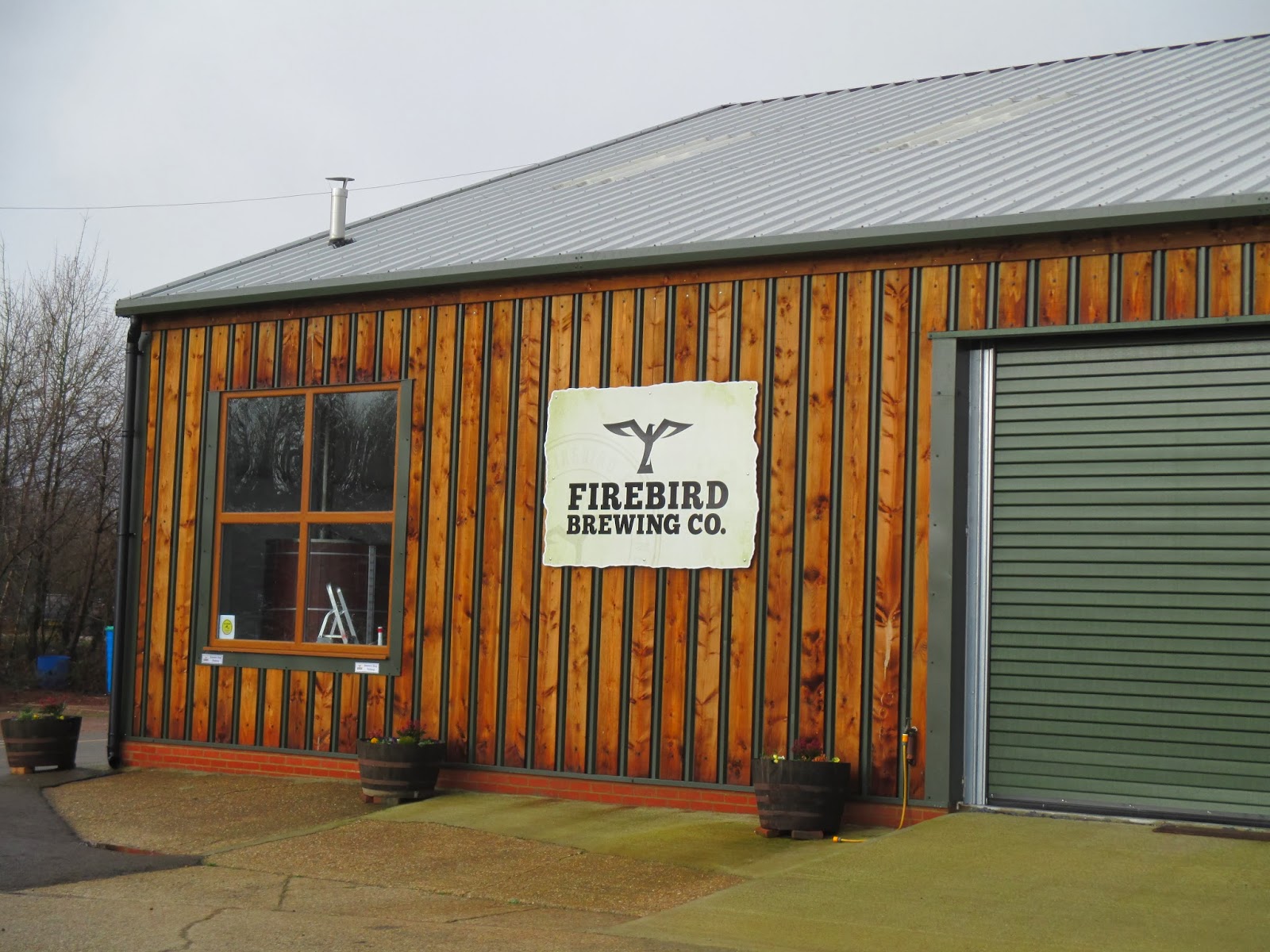 The brewery is part of a major redevelopment that is taking place at the Old Rudgwick Brickworks a few miles to the West of Horsham off the A281.  The site is owned by the family behind Sussex Charmer Cheese and they have a unit selling their produce.  The building housing the brewery and shop now looks complete and impressive but there are still many other units that will be developed behind it.  According to Richard this facility helps them with their plan to be part of the local community. 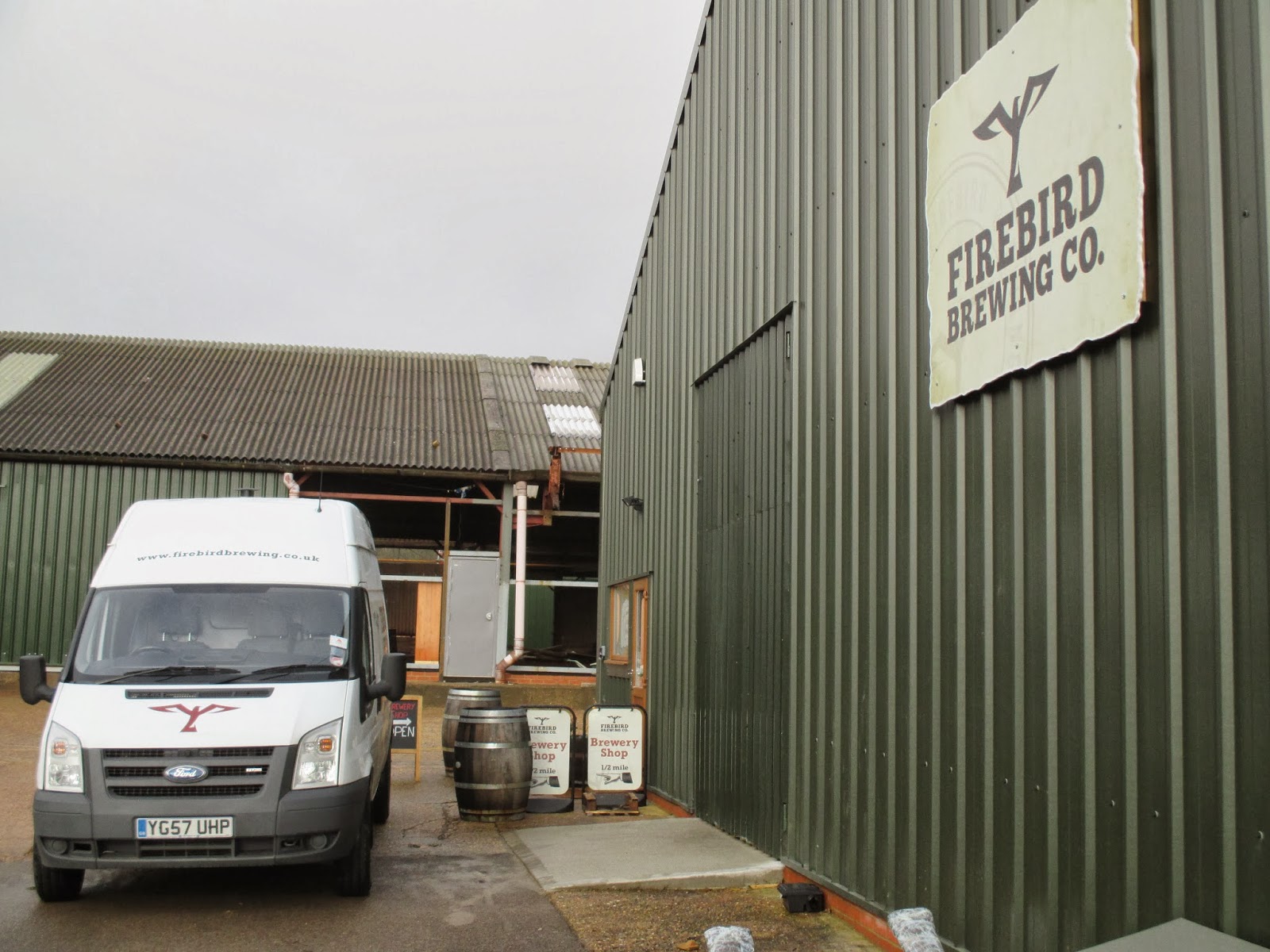 Bill was busy brewing when I arrived but Richard was happy to chat and show me around.  They have exciting plans for both the brewery and the beers they want to produce.  They aim to brew authentic craft beers using beer styles from all over the world.  Their launch beers were Heritage XX (a traditional best bitter), Paleface APA (an American Pale Ale), Old Ale (a recreation of the old K&B Old) and Bohemia (a pilsner lager).  Future plans will probably include a German Weissbier, a Belgian Pale Ale and a single hopped (New Zealand Pacific Gem) pale ale. 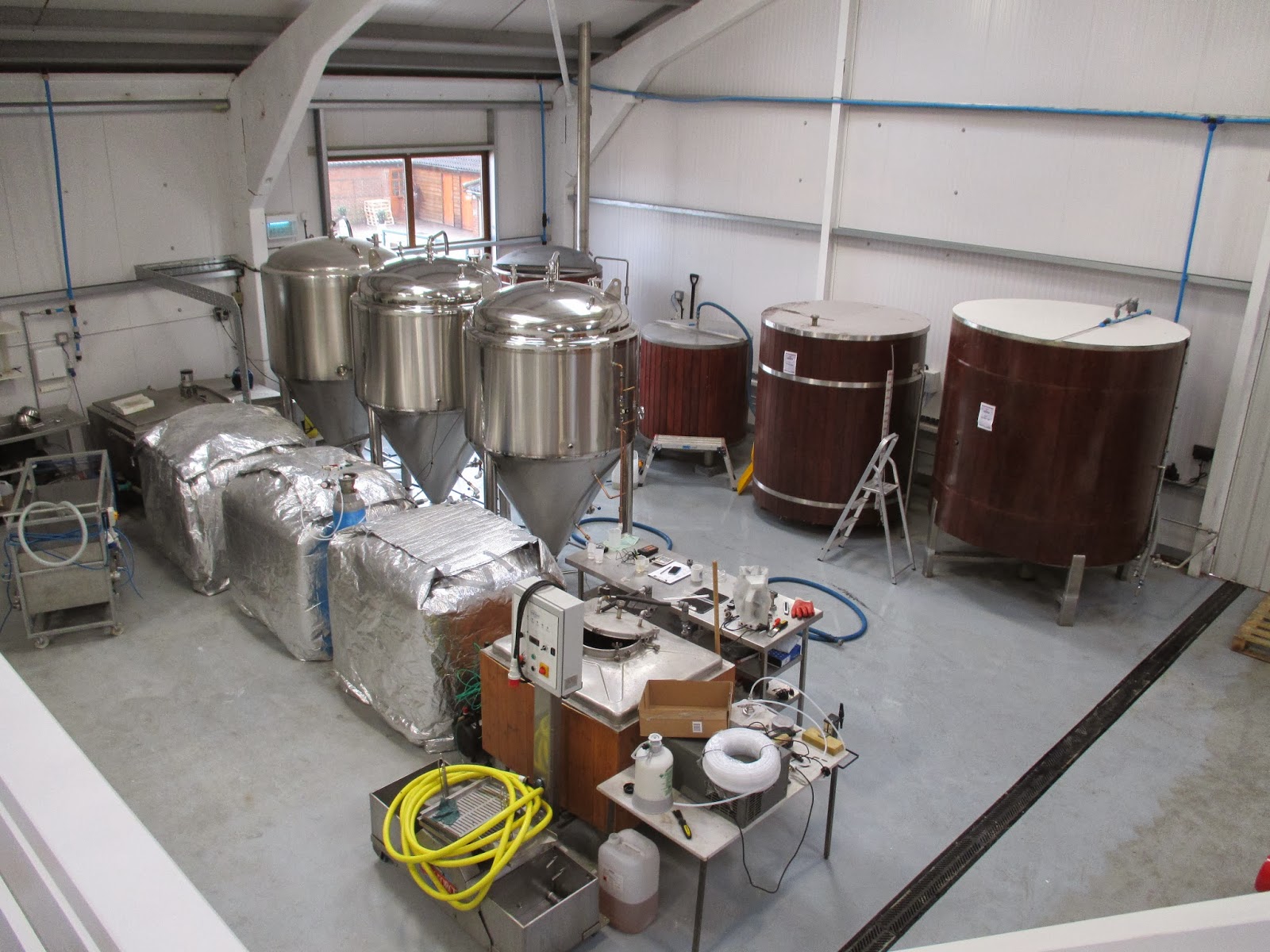 The brewery itself is housed in a spacious unit.  The 10-barrel plant has been purchased from used kit all over the place with much of it coming from Ireland.  The balcony area is being set aside for an indoor beer garden as they want the place to be a meeting point where people can enjoy the beer within the place where it is made.  This is all part of the plan to be part of the local community.  In addition to brewery tours they are also offering the opportunity to be a brewer for a day on an individual basis under the guidance of Bill or Richard.  The cost of £149 will include a 36 pint polypin of the beer you brew. 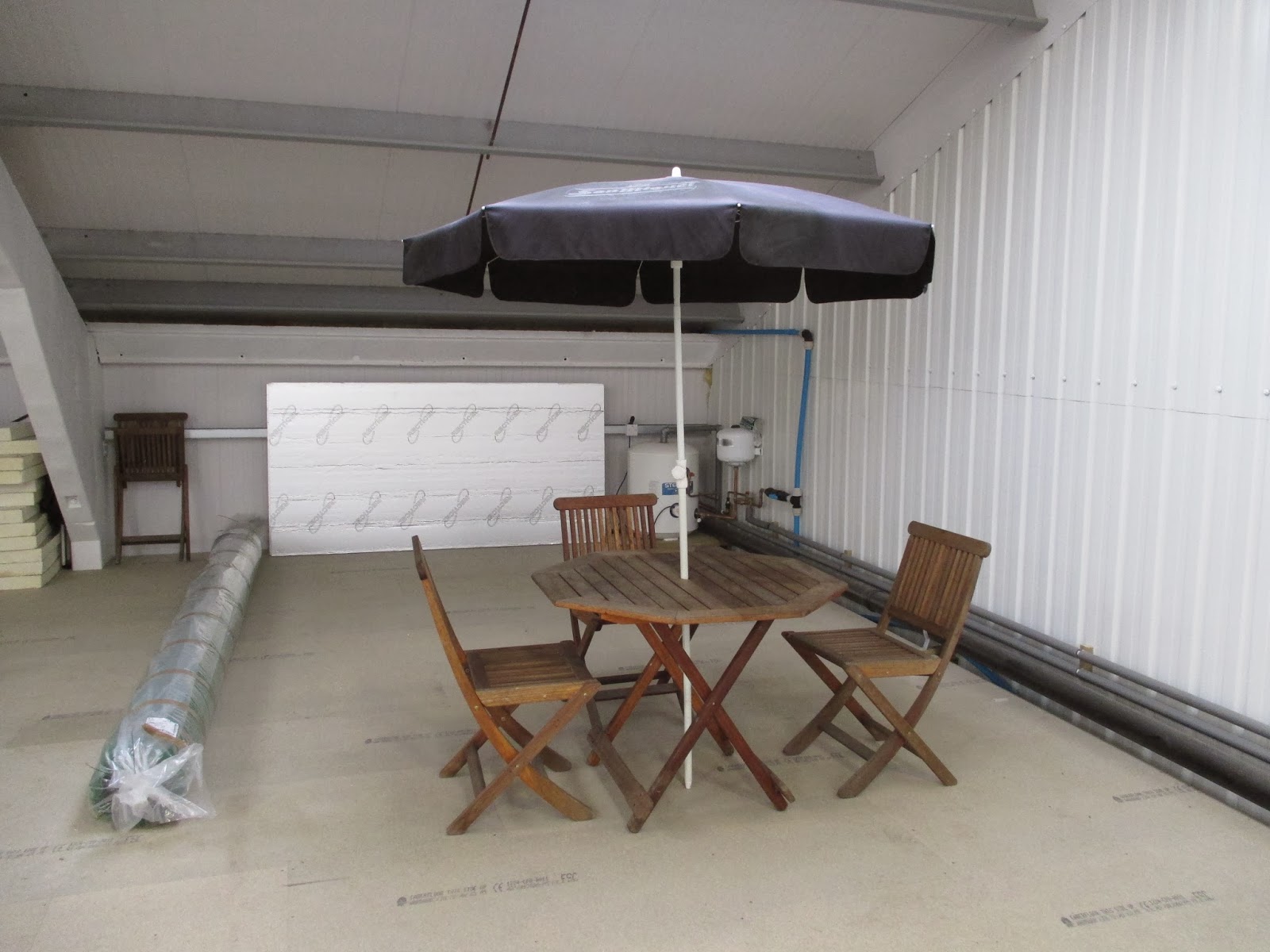 The best part of visiting a brewery of course is trying the beer.  Richard kindly offered me a taster of the Heritage XX, the Paleface APA, the Old Ale and a 'beer with no name'.  I took home a bottle of the Bohemia and the Heritage XX and these are reviewed below.  The Paleface APA is a 4.9% ABV American Pale Ale brewed with Cascade and Chinook hops.  They aren't going overboard on the hops but it is a delicately flavoured beer with spicy and aromatic notes.  They had no bottles left for me to buy so it must be proving popular.  The Old Ale (4.5% ABV) was a fine interpretation of the old K&B version with plenty of roasted malt creating some sweet chocolate notes followed by a smooth slightly bitter finish.

The Heritage XX (4.0% ABV) is English hopped with Fuggles, Goldings, Challenger and Progress.  It is very much a traditional Best Bitter and it was only when I cracked open the bottle at home that I really appreciated the flavours.  It has a lovely deep golden appearance.  There is plenty of fruity hoppiness with notes of pineapple and peach up front before it gives a delightfully dry bitter finish which gets better and better as you move down the glass.  The 'beer with no name' was based upon the Heritage XX but minus the Progress hop and with some caramalt thrown in which gave it a darker appearance and some sweeter toffee notes. 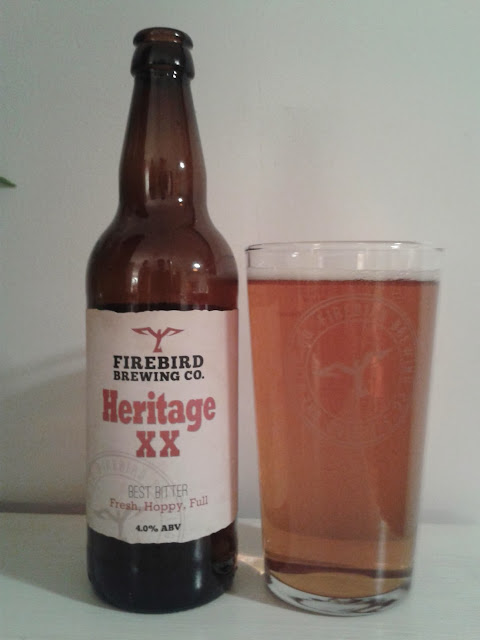 The Bohemia Pilsner (4.8% ABV) is a classic Czech style lager.  The label description of crisp, floral and spicy pretty much sums it up.  Very drinkable and  pleasant.  I do enjoy drinking proper lagers and this is a classic example of such. 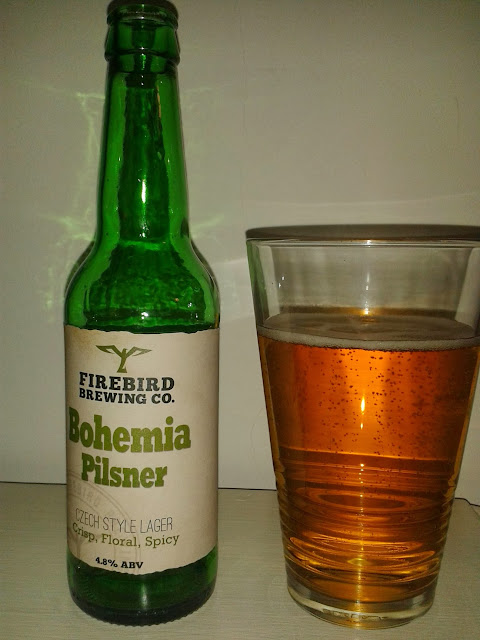 Bill King is very much back on the brewing map of Sussex.  It will be interesting to see how this project grows over time as they are definitely in it for the long haul with Bill's son showing an interest in following in his father's footsteps.  Let's hope the King name continues to span the generations and lives on.