I really want to like this beer.  There has been masses of publicity regarding the collaboration between Manchester-based Robinsons Brewery and Iron Maiden's frontman Bruce Dickinson.  For the full story behind the collaboration and an interview with Bruce Dickinson I suggest you click the link to Pete Brown's blog as he was the lucky man who got to interview this rock god.  Robinson's Brewery say they have been surprised at the reaction behind this new beer.  However, Iron Maiden are a band that have sold over 85 million records worldwide.  They are huge.  They have fans in every corner of the globe and their popularity seems to be increasing.  Their latest album, The Final Frontier, entered the album charts at no.1 in 29 countries.  Iron Maiden's loyal fan base will crave anything that is linked to them and that now includes beer.  I fell in love with the music of Iron Maiden at around the time I began to fall in love with beer.  So yes, I really want to like this beer.

Firstly, the label is excellent as you would expect from a band famed for their album covers.  For those of you unfamiliar with Iron Maiden they have a mascot called Eddie who appears on their artwork in various guises.  The label has Eddie dressed up as a trooper from the Crimean War to represent the name of the beer which comes from the band's 1983 single 'The Trooper'.  The song is based on the Charge of the Light Brigade at the Battle of Balaclava in 1854.  OK here ends the history lesson.  What about the beer?

The beer is deep golden in colour and certainly looks appealing.  It has a slightly malty aroma with a bit of peach fruit.  The fruitiness continues into the taste before it gives way to a slightly dry bitter finish.  Yes it is a nice well balanced beer and certainly drinkable but I feel it doesn't taste up to its strength of 4.7% ABV.  It has the taste of a session bitter but the strength requires something more robust. 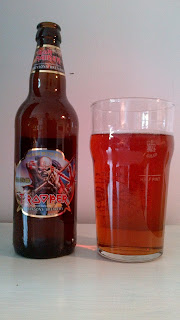 Robinsons Brewery to me will always be synonymous with Old Tom, a stupendous winter ale at 8.5% ABV.  Now wouldn't it be great if we had an Iron Maiden bottled winter ale called Old Eddie at a strength of 6.66% ABV?  I think Robinsons need to invite Bruce back for this one.  As for Trooper I will put aside my disappointment and give it a score of 6/10.