My first beer is described as being brewed by a chick in Crewe.  It had a lovely deep golden colour to it and a classic fruity aroma.  The initial taste was one of citrussy hops with a lovely mix of lemon and grapefruit notes.  It was love at first sip.  It has plenty of strength and that comes through in the robust flavour.  It had a delightfully long finish to it with a lovely tingling bitterness.  It really is a classic modern American-styled IPA which I always seem to enjoy.  Score 9/10 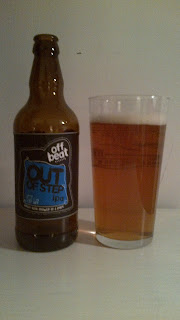 This beer is also brewed by chicks, as Mallinsons describe themselves as women who brew beer.  They love hops and this is my second single hop beer from this brewster.  The Amarillo (4.3% ABV) was superb and so I was looking forward to this one too.  Just look at the picture below.  This beer looks absolutely magnificent.  The hoppy, citrussy aroma was also very inviting.  The first taste was of grapefruit along with a little earthiness too.  Galaxy is an Australian hop and is described as giving both a citrus and passion fruit flavour.  There was definitely a richer fruity flavour coming through alongside the citrussy grapefruit notes.  The finish was quite dry but very pleasant.  I like this beer very much and hopefully I can find more of their single hop beers to enjoy in the near future.  Score 9/10 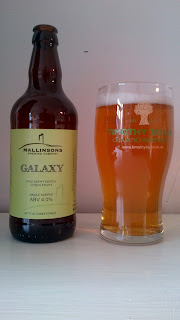 Two Towers is a small micro brewery based in the Jewellery Quarter of Birmingham.  This beer was a nice pale golden colour.  The aroma was certainly pleasant with hints of grapefruit coming through.  It is a beer made with maize and wheat as well as pale malt and it is hopped with Fuggles and Goldings.  The initial taste was a little sour and I had to check the best before date on the bottle as I was not convinced it tasted right.  With the date showing March 2014 I persevered.  There were some grapefruit notes giving some bitterness to it but the aftertaste was quite harsh and not very pleasant.  This is the second beer I have tried from this brewery and the second one I have not enjoyed.  Score 4/10 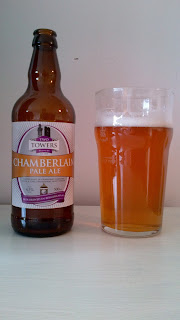 Talk about saving the best until last.  Ilkley Brewery is fast becoming a massive favourite of mine.  This 'premium blonde' looks magnificent and it had a lovely fresh lemony aroma to it.  It is brewed with the Nelson Sauvin hop from New Zealand.  The initial taste matched the aroma but this gave way to lovely richer fruit notes like passion fruit.  Everything about this beer was perfect.  The clean crisp taste continued throughout with more and more citrussy notes coming through and I was left with a very satisfying lemony bitterness aftertaste.  Score 10/10 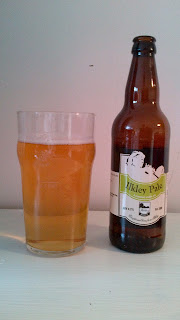