By a stroke of luck I found myself in Bristol for an evening. The Barley Mow was recommended as a pub to visit and as it is close to Temple Meads station it was a good place to start. From the station I headed across the river via a modern S-shaped bridge, past an Ibis Hotel and through an area of modern flats before coming across a tidy looking pub. 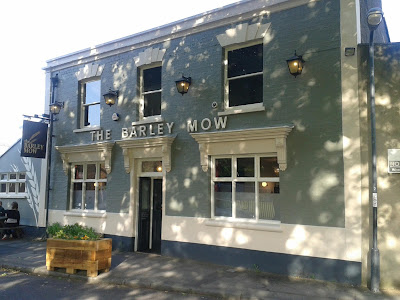 Once inside I felt at home immediately. The bar that faced me had a row of 8 hand pumps. Behind the bar were 10 taps serving keg beers and lagers. A truly modern pub.

The pub itself is one relatively small room. The bar is central and similar sized seating areas are at both ends.  Outside at the back was a covered patio area. Bare wooden floors, solid looking tables and chairs as well as cleverly constructed wooden benches gave the whole bar a clean modern classic feel.  To me this is the perfect pub. I would not change a single thing and I have not been in a pub where I have ever thought that.

The beer selection was immense. On cask there were the following choices

The selection of keg beers were from the best of the new wave micro breweries that seem to be opening up all over the UK. Those available included the following

With so many cask beers to choose from I ignored the keg. Well, if it isn't consumed quickly it will go off and that would be a tragic waste. With beers from four breweries that were new to me I began with a pint of Beyond The Pale (5.4ABV) from the Kent Brewery. This was an extremely pale bitter that looked fantastic.  It was a lovely hoppy beer with strong lemony flavours with a spiciness to it too.  Full of flavour it had plenty of strength and I loved it.  It very nearly achieves top marks.  Score 9/10.

With other recommended pubs a considerable walk away and over a dozen other beers to choose from I decided to stay.  I ordered some chicken wings and chunky chips to go with my second pint which was the Arbor Ales Hoptical Delusion (3.8ABV). This was my first taste of Arbor beer on cask having previously tried a lovely bottled beer from them. Described as being packed full of hops it was surprising that it had little aroma. The initial taste was quite complex. It had a pleasant earthiness to it and it took a while to get more flavours. I should not have had the stronger beer first but the full flavour eventually found a way through and it was a delight.  I want to find more beers from this brewery for sure.  Score 8/10.

There was time for one more pint before heading back to the station. The Bristol Beer Factory Bitter Californian was described as a hoppy brown ale.  What a beautiful beer it was.  Both hoppy and malty in equal measure it was superb and my favourite beer of the evening.  A definite 10/10 gold medal beer.

Awesome beers and excellent food in a modern simple pub with the friendliest of bar staff. This pub is perfect.

Happy drinking.
Posted by Unknown at 21:57