Last night I braved the wind and the rain to visit some of the pubs of Felpham village with my fellow Western Sussex CAMRA branch members.  Felpham now appears to be just a part of the greater Bognor Regis area but historically it existed long before the town as it is mentioned in the Domesday Book.  The only thing separating Felpham from its neighbour is the Butlins holiday village.  The poet William Blake was Felpham's famous resident having lived in the village for a few years where he wrote his famous poem 'Milton'.  The old centre of the village is still evident just a few hundreds yards from the sea and within the village, which is bypassed by the A259, there are four pubs.

The first stop last night was the Old Barn. This pub was closed down by the local authorities a few months ago but with new management it reopened a few days ago with certain restrictions imposed upon it. Hopefully, this former Good Beer Guide pub will once again get a reputation for selling good beers rather than attracting troublemakers. Based on the evidence of last night it has a chance. I last visited this pub a few years ago when it was a basic village local and the interior hasn't changed greatly.   It has a small bar at the front adjoining a similar bar in the centre and to the rear there is now plans for a dining area. In the middle bit there is a dartboard and plans for bar billiards too. There is a small drinking area outside at the front too. 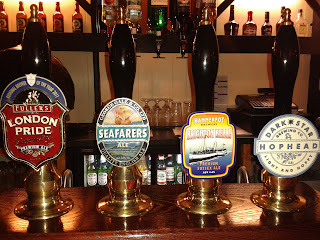 As well as the four beers above to choose from there was a cask of Palmers 200 on the bar.  However, for my first pint I went for the Dark Star Hophead (3.8% ABV) as I have heard such good reviews of this beer.  I was not disappointed.  It is a lovely pale beer with a bit of a citrussy hit to it along with some elderflower notes giving it a full hoppy floral flavour for such a low strength.  An ideal session beer.  This is one beer I'd like to see as a regular on the bar.

There was time for a second pint before moving on so I opted for the Brighton Belle from the local Hammerpot Brewery (4.6% ABV).  This is another beer I have not tried before and it was a pale golden colour with mild floral notes with a hint of lemon and a gentle bitter finish.  It was another delightful pint.

By now our group of CAMRA members had grown to nine and it was time to move on to the second pub.  The Fox is situated in the heart of the old village.  You enter into an oak panelled bar and tucked away to the left is a large dining area.  Outside there is a large garden which will be very popular in the Summer if it ever arrives.  There were seven beers on offer.  These were Hobgoblin, two from Otter Brewery (Ale and Amber), the dreaded Doom Bar, St Austell Tribute, London Pride and Courage Directors.  Nothing too unusual then but I went for the Otter Amber (4.3% ABV).  The name describes the colour to perfection.  It had some sweet honey flavours along with a gentle malty character.  It was certainly a pleasant pint but not my favourite kind of beer.

The plan was to then move on to The George, a pub on the outskirts of the old village, but when we arrived it was closed.  It had been open earlier in the evening as I had walked past it so why it had shut early I have no idea.  On the way we had passed a Fullers pub, The Old Thatched Tavern.  Curiously named because it has a plain tiled roof, this had a single bar open with one customer observed as I peered through the window.  Felpham was clearly a buzzing kind of place so it was back to the Old Barn for a final drink.  This pub was nearly empty now too but thankfully the doors were open and the owners seemed pleased to see us back.

My final pint was the Palmers 200 (5.0% ABV) served straight from the cask.  This was a delightful copper coloured ale with a rich malty taste.  First brewed in 1994 to celebrate the brewers 200th anniversary it has become a regular ale and I can see why.  Plenty of caramel and orange notes made it a very robust beer with plenty to enthuse about.  I loved it.

That brings the events of the evening to a close.  Some excellent beers in a couple of very different pubs and in good company.  Hopefully the newly reopened Old Barn will be a success and will continue to offer a good range of beers as it did last night.  If you are visiting the Sussex coast Felpham is an ideal destination away from the tackier Bognor Regis and when the tide is out you will also see a decent stretch of sand.  You can go there safe in the knowledge that a few yards away from the sea you can get some good beer.