A tale of two citras

I was really looking forward to reviewing these two beers over the weekend.  I am a recent convert to the delights of the Citra hop although the hop itself was only created and released as recently as  2007.  I brewed with it on my day at Sadlers Ales last year as it provides the fantastic hoppiness to their JPA and I have enjoyed drinking beers brewed with this hop ever since.

My first bottle was Oakham Ales Citra (4.6% ABV).  This cost £2.50 for a 500ml bottle and according to the label Oakham Ales were the first UK brewer to use the Citra hop.  I enjoyed the cask version of this beer last year marking it a score of 9/10.  The bottled version is slightly stronger and I had high hopes for it.  After pouring it looked delightful with a very clear look to it as you can hopefully see below. 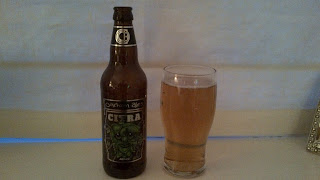 It has a pleasant citrus aroma but it was not overpowering. The grapefruit flavour is immediately apparent but as with the aroma it isn't totally dominant. It has a lovely spicy zing to it and it moves into a gentle bitter aftertaste.  It really is a classic refreshing beer perfect for a warm Spring day.  I would have to award it a gold (10/10).  I was left regretting only having purchased a single bottle.

This brings me on to bottle number two.  This was from the London based Kernel Brewery.  The label resembles plain brown wrapping paper with the name of the beer simply stated.  So simple I think it actually stands out from the crowd.  It is the second bottle I have tried from this brewery and I was not disappointed with the first one.  This Citra Pale Ale comes in at 5.3% ABV so somewhat stronger than the Oakham Ales version but it did have a premium price of £3.50 for a 500ml bottle.

After pouring, it had notable differences to the Oakham Ales Citra as you can probably spot below.  It has a deeper golden colour and it was not as clear in the glass.  This is probably my fault as the bottle does contain sediment and my pouring is not always as it should be. 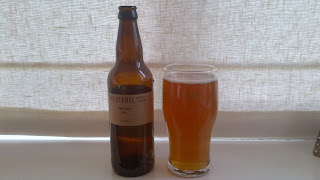 It has a massive citrussy aroma but the immediate taste is not a hop hit as it is balanced by an earthy maltiness. Then, the more you drink the more the grapefruit notes kick in along with that sublime bitterness.  There is more complexity to this drink which I really like.  It is richer and more robust which adds to the citrus flavours without detracting from it.  It will probably not surprise you then to realise I have awarded top marks to this beer too.

These two superb beers certainly met my expectations.  The price difference is annoying but not enough to put me off buying the more expensive.  The Oakham Ales is probably more refreshing and hoppy whereas the Kernel Brewery version is stronger and more robust with more balance.  However, if you like one you will undoubtedly like the other one too.  Differences yes but there is always that underlying bittterness and citrus hit from the Citra hop that I adore.  If you haven't tried the hoppy hit of Citra then I recommend it.