The next part of my journey around Yorkshire brings me to West Yorkshire.  The people at Little Valley Brewery have been brewing their beer since 2005 yet it is a brewery I have never come across before.  The brewery was formed by Dutch-born Wim van der Spek and Sue Cooper who met while undertaking separate adventurous cycling trips.  Wim was on his way to Tibet from his home in Holland and Sue was heading to England from Nepal.  I am not sure where their paths crossed though!  What is important now is that together they settled near the town of Hebden Bridge to brew 100% organic beer on a 10bbl plant.  Hebden Bridge of course was one of the locations for the BBC series Happy Valley.  This ridiculously named series, as everyone was far from happy, was full of greedy psychopathic killers and very stupid people and hopefully it bears no reality to what is a beautiful part of Yorkshire.  If you never watched Happy Valley then think of Fargo but set in Yorkshire.  If you've never watched Fargo either then just drink the beer and forget about it.

I began my taste of Little Valley with a wheat beer.  I don't normally get on with wheat beers but this one proved to be an exception.  It is a very pale Belgian style wheat beer with the aroma I expect from the Belgian yeast of coriander and that slight sourness.  The taste is quite unexpected though with a zingy sparkling mouthfeel and notes of lemon coming through in what is quite a dry bitter taste which I found quite refreshing.  A little sourness comes through in the finish but the bitterness intensified throughout and it is more like a saison really.  My wife can't get on with these type of beers at all and thought it tasted like vomit which is to be expected but I really liked it and I score it a very good 8/10. 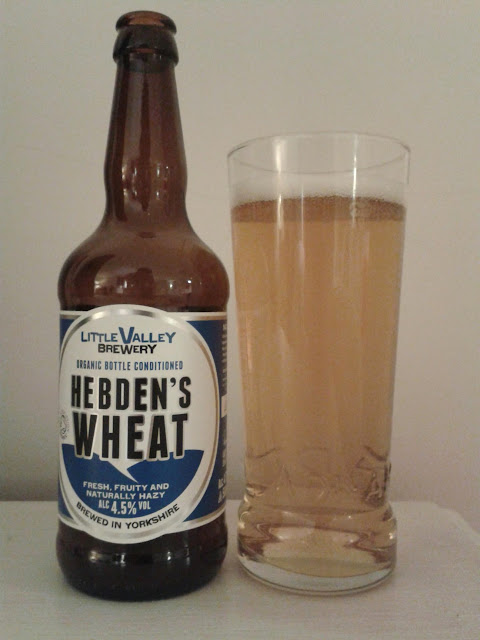 I began with a wheat beer that had hints of a saison and now I am onto a stout that has hints of being a black IPA.  The aroma is very much a traditional stout with large helpings of roasted malt character that I love.  The taste initially matched this with a strong coffee bitterness.  The beer is described as having a rich and creamy feel with notes of orange and citrus which I was not getting though.  I persevered obviously as I was enjoying the beer no end and some citrus notes did filter through and by the end I was thinking it was tasting like a local black IPA I love.  If you like your stouts creamy with a little sweetness then it may not be for you, as my wife would testify to, but the addition of wheat in the mix has given this beer more complexity.  This one also picks up a score of 8/10. 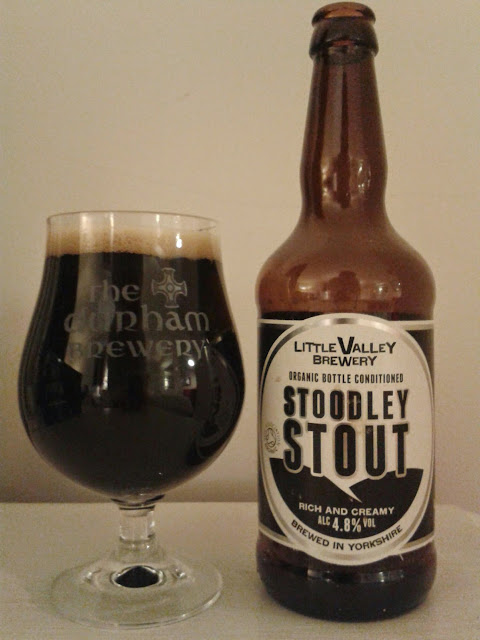 The final beer is a nice looking golden IPA.  The aroma is decidedly fruity and floral.  There are notes of orange in this one that I was missing from the stout and there is a sweety fruitness very much to the fore here.  The finish is dry and spicy.  Overall it is a little too sweet for my personal taste when it comes to an IPA but it certainly has a richness and full flavour.  My wife was happy to have an IPA that wasn't 'American' and bursting with citrussy and tropical fruits as I am often inflicting on her.  Overall a score of 7/10 with this one. 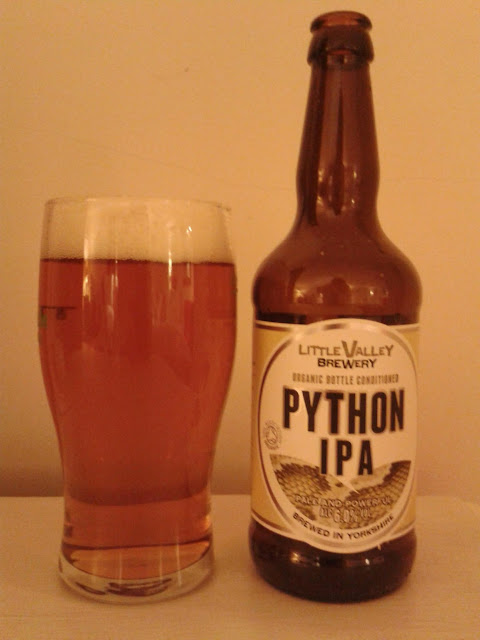 It is apparent that Little Valley are brewing some quality and interesting beers.  Their labels are colourful and stand out nicely from the crowd.  They have an excellent website which is easy to read, easy to use and informative.  They have the fact that they are 100% organic which is a big plus in their favour with some people.  They are also approved by the Soil Association and the Vegan Society which will be a draw for others too.  They are definitely a brewery I will look out for in the future and I will give them a final score of 8/10 for their overall look so a total of 31/40.

As explained previously where the points are equal the marks for the beer is the decider and Mallinsons scored higher than Geeves and Little Valley who scored equally.

Next time I will be exploring Here Be Monsters.