The next stop in my journey around Yorkshire is Barnsley, the home of British heavy metal giants, Saxon.  Before I rock on with telling you about the Acorn Brewery though a quick insight into how I chose which breweries to review this time.  Firstly, there had to be three beers for sale from the brewery (obviously) and also I purposely only chose breweries selling their beer in 500ml bottles.  I do not like buying beer in 330ml bottles as I just get the impression I'm being ripped off.  To check whether this is a myth though I went through the entire stock of Yorkshire Ales and the average cost of a 330ml bottle was £2.70 and the average cost of a 500ml was £2.70.  However, this does not take into account the strength of the beer of course as many of the 330ml bottles are higher strength.  The average ABV of the 330ml bottle was 5.4% compared with 4.5% for the 500ml.  Personally I don't think 330ml of a 5.4% ABV beer should be sold at the same price as 500ml of a 4.5% ABV beer but let's remove the lower strength beers from the 500ml side.  The result of this is that the average price of a 500ml bottle is £2.81 with an average ABV of 5.6%.  So for an extra 11p we're getting 50% more beer which is why I don't like 330ml bottles!

Now we come to the Acorn Brewery on the outskirts of Barnsley who sell their lovely beer in half litre bottles of course.  They are certainly old hands at the brewing game as they have been going since 2003.  Dave Hughes had been head brewer at Barnsley Brewery for two years before going it alone and starting Acorn with his wife Judi using the same yeast strain as the original Barnsley Brewery which began brewing way back in the 1850s .  Since 2003 they have collected over 50 awards for their beer so hopefully I won't be disappointed with my selection especially as I chose some of my favourite beer styles.

The Acorn Blonde is a cracking beer.  The aroma is decidedly lemony and the initial taste was crisp, fresh and zingy.  Lots of lemony citrussy notes springing up all over the place.  In the middle there is a bit of a spicy tang and the finish is lemony, grassy and dry.  This would be a perfect summer beer but it tasted pretty damn good on a cold February evening too.  My wife gave it a hit and overall it's a score of 8/10. 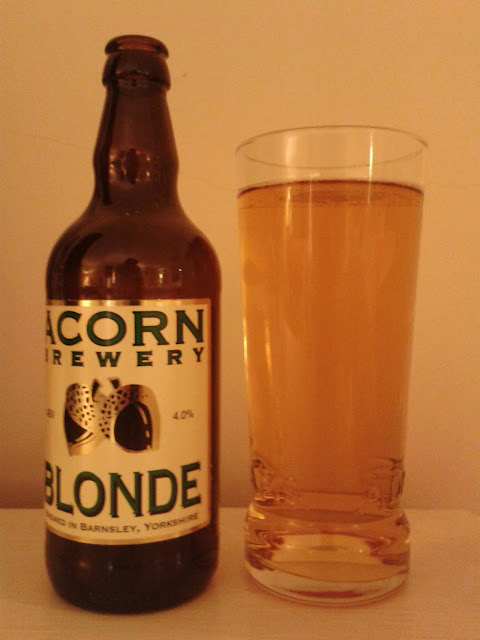 This beer is described as a victorian style porter.  If that is true then they certianly liked their roasted malt back in those days.  This has lots of it and for such a low strength it is surprisingly full bodied and quite rich.  There are hints of chocolate and liquorice and the finish is actually dry and smooth after the initial bitterness.  My wife wasn't a fan, probably too bitter, but as far as I'm concerned it was nearly perfect and it gets a 9/10. 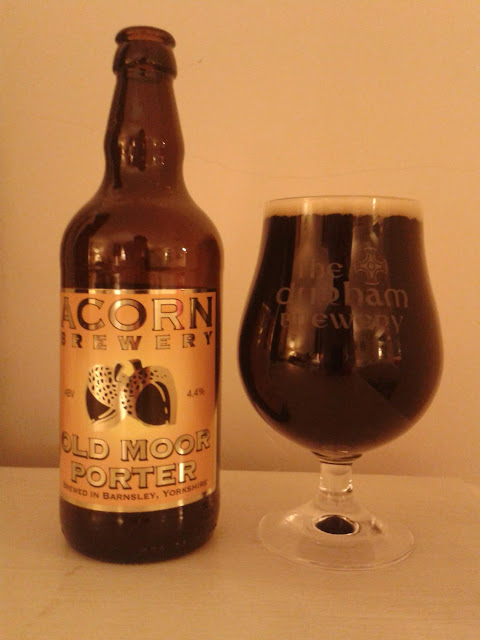 Gorlovka in the Ukraine is twinned with Barnsley and their connection goes back as far as 1956 when a delegation of miners from Yorkshire stayed in the town.  It is therefore a suitable name for this robust imperial stout.  There is lots of smoky roast malt character in both the aroma and the inital taste.  It has a sweet middle with hints of liquorice predominantly although I did get faint hints of vanilla and dark fruits too and it all led to a lovely bittersweet finish.  A hit from my wife with this one.  For me it does not quite compare with the incredible Thornbridge St Petersburg which is my yardstick for this style of beer but it is still lovely and gets an 8/10. 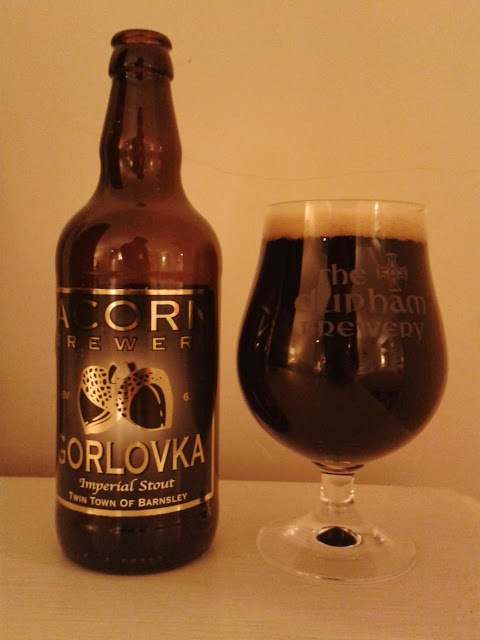 Now onto my final mark for the overall look of the brewery in terms of their marketing and beer labels.  I love the look of the labels and my wife thought they were great too.  The website is excellent and hard to fault really.  Nice graphics, all the information you need, easy navigation and pleasing on the eye.  A score of 9/10 is fully justified here so they are now the new leaders in my table of Yorkshire brewers.

For a brewery that has been around for over a decade I am surprised I have not had more of their beer before so I was not sure what to expect from Acorn to be honest.  However, the three beers were all excellent and in my updated league table they find themselves at the top so this is one brewery I will certainly look out for in the pubs and at festivals.

Next time I will be sampling the beers of Little Valley Brewery.