I was going to call this post 'Drinking with Tweeters' as everybody I had the pleasure of drinking with on Saturday I only knew from Twitter prior to the weekend.  If you are into beer and you tweet then you will never be short of someone to drink with wherever you may roam.  This weekend was originally planned for May but due to illness I had to cancel it and my mate could not make the new date so I set out alone to meet up with Jim (@BeersManchester) with the expectation that one or two more of Manchester's beer lovers would also be joining us.  The Marble Arch was the agreed start point and I was really looking forward to frequenting the original home of Marble beers.

The pub has an amazing interior.  There is some lovely wood panelling around the bar and a mosaic tiled floor that slopes down all the way from the front door to the bar at the far end.  The ceiling mosaics are equally impressive and it is amazing to think that these were only discovered after renovations in the 1980s.  The interior is so important now that there would be a national outcry if a second cover-up was ever attempted but as it is a listed building that is never likely to happen.  The walls are also tiled and there are some impressive mirrors and interesting artefacts all around.  The pub no longer houses the Marble brewery which began brewing here in 1997 before moving to larger premises nearby but there was a full range of their lovely beers along with a couple of guests.

Jim arrived shortly after I got there and introduced me to Pint (3.9% ABV), a session bitter packed full of citrussy hops which I much preferred to the more traditional Manchester Bitter (4.2% ABV) which I had ordered first.  Dobber, my favourite IPA, was not available but it was an ideal opportunity to try the Earl Grey IPA (6.8% ABV) for the first time.  I am not a tea drinker but I found this beer to be very smooth with plenty of citrussy hops which dominated the character of the beer although there were hints of another flavour which was probably the tea!  Not as nice as Dobber (what is?) but it is still an excellent beer.

While we were on our second beer of the day we were joined by Al (@hopsinjoor) and Emma (@EmmaJCole) who are both about to begin new ventures in the world of beer via Cloudwater Brewing Co and Brewdog respectively.  I was wearing my Downlands Brewery T-Shirt and it is no lie that every time I have worn this outside of Sussex someone comes up to me and says do you know Widdi (the Downlands head brewer).  Sure enough Emma knows him well and the question was put to me once more.

We couldn't sit around drinking Marble beers all day (however enjoyable it would have been) so we headed for the home of Blackjack Beers, a short stroll from the Marble Arch.  By now we had been joined by craft beer lover Jeff (@m28Jeff), Belgian beer lover Des (@DeDolleDes) and Jim's arch nemesis Jaz (@CJJazwinski).  Blackjack is located under a railway arch and they throw open their doors once a month where they serve a selection of cask beers (including their own of course) as well as a wide range of kegs and bottles from breweries far and wide.

I stuck to halves here as there was so much to try and I began with the superb Blackjack Stout (5.0% ABV).  Roast and chocolate malts were very much to the fore and it is a perfect stout.  I followed this up with a keg from new Manchester micro Runaway.  The American Brown (5.7% ABV) was lacking in flavour for me but the same could not be said for the final beer here which was Fifteen Minutes of Flame from Welsh micro Hopcraft (4.5% ABV) which was heavily hopped and quite delicious.
In London there are quite a few of the newer micros opening their doors in this way and it is something that should be supported.  The only disappointment for me was drinking out of plastic glasses.  The beer choice though was quite extensive and of the very highest quality with beer from some of my current favourite micros available such as Weird Beard, Moor, Burning Sky, Arbor, Siren, etc as can be seen in the picture below.


From the Blackjack Brewery we began the crawl around the Northern Quarter pubs in earnest.  First stop was the Angel, described as a dining pub, where we were able to enjoy our pint in the sunny garden with fine views of the Crowne Plaza and the Rochdale Road!  From the outside the pub seems quite basic but inside it is very elegant and it even has a grand piano.  I was trying to stick to local beers for most of the day and here I chose a Dainty Blonde (4.2% ABV) from Privateer, a local micro using only American hops.  This particular beer was a little too floral for my liking and had a bready malt character too which clashed a bit.  Probably my least favourite beer of the day.

After the Angel it was left to just me, Jim and Jaz to battle on alone and we headed for the Smithfield Hotel.  This pub is one of the oldest bars in Manchester and I think it has recently been closed for refurbishment.  The interior is a bit garish and quite modern now but there was a good selection of ales and I opted for a pint of Odin (3.9% ABV) from the local Brightside Brewery.  This beer was ok with a slight floral edge to it with sweet, fruity notes coming though in a refreshing finish.

There really wasn't much walking required on this crawl and indeed it was another short walk to the next stop, Bar Fringe.  For some reason I tried a second beer here from Brightside.  B-Side (4.2% ABV) is a fruity golden bitter with a refreshing dry finish but again not as bitter as I like but I did prefer it over the Odin.

Bar Fringe is really a quite fantastic Belgian-style bar with a range of continental draught and bottled beers in addition to a good range of cask ales.  The long narrow bar has quite an eccentric decor including a well parked motorbike which was pointed out to me as we departed.  There were some excellent posters in here too and one in particular is my new calling card - 'Beer - Everybody Needs a Hobby'.

We were cracking on at a rapid rate now and after leaving Bar Fringe it was a short walk to the Crown & Kettle.  I was attracted to the low strength Table IPA (2.8% ABV) here by Ticketybrew.  I have enjoyed Ticketybrew beers in bottles so I was delighted to find one of their cask beers.  This is a full flavoured low ABV beer with a massive hoppy taste and it was a hit with Jim too.  This was my favourite beer since leaving the Blackjack brewery. 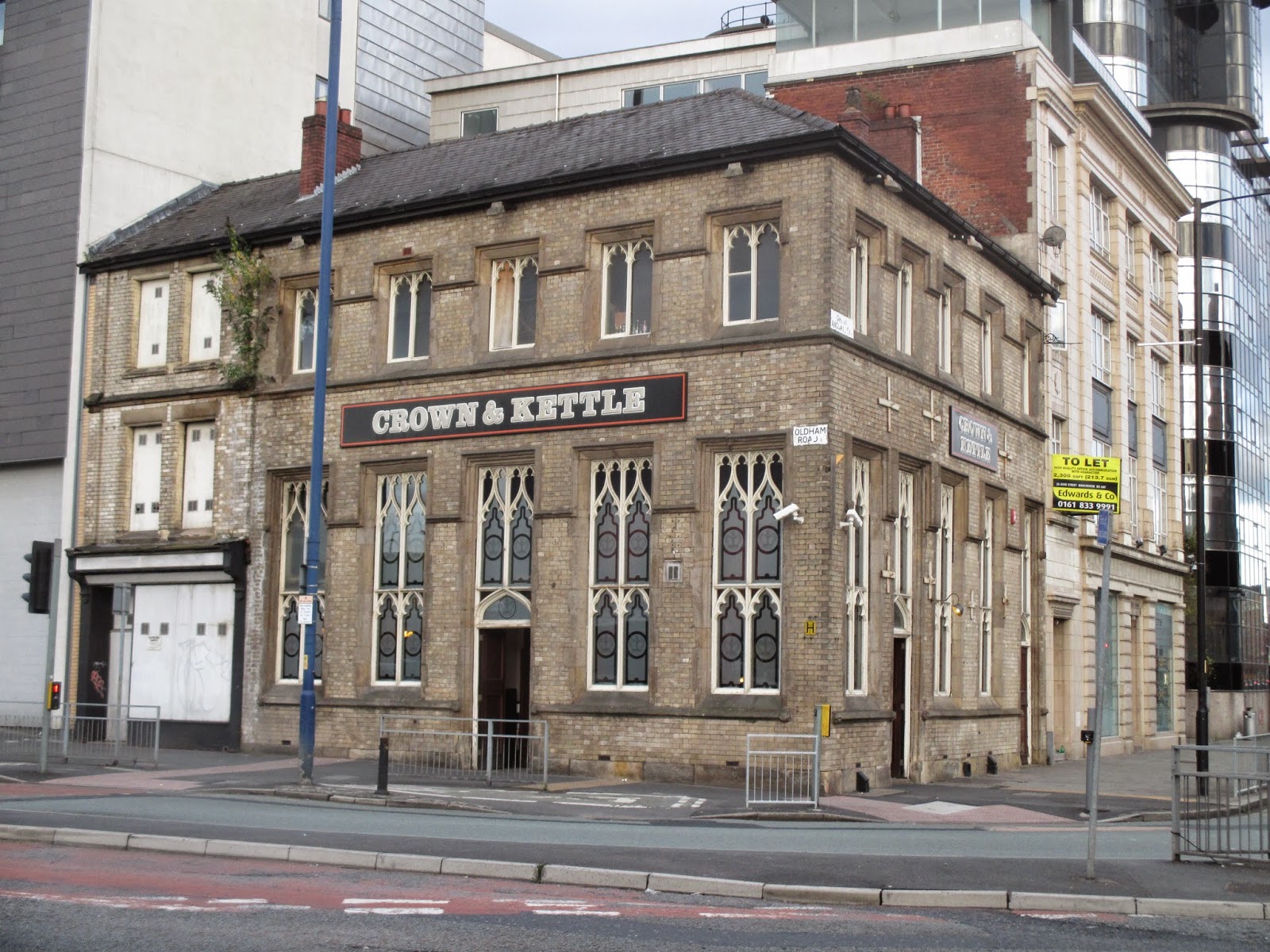 The pub itself is a fabulous Grade II-Listed building.  It has three rooms served from a central bar which has five or six handpumps.  We retired to a quiet room with an interior well worth checking out with the most amazing ceiling and chandelier.

From here on things begin to get a bit hazy!  I have no idea where we went to eat but it was superb and more than welcome.  This gave us a break from drinking though which was not a bad idea.  The evening drinkers were out now and our next stop was the popular Port Street Beer House, located in former shop premises.  I headed to the other side of the Pennines for my beer though with a Kirkstall Pale Ale (4.0% ABV), a delightful hoppy pint with good zingy citrussy notes.  In addition to a fine range of cask ales (the pump clips of past beers adorned a good amount of the walls in the bar) there is a solid stock of bottled beers from the US and Belgium particularly.

The Soup Kitchen turned out to be our penultimate stop and it is a pub/bar like no other I have been in.  There were long communal tables laid out canteen-style.  The food being served focuses on soups unsurprisingly but the range of beers is always interesting Jim informs me.  The staff here were particularly friendly and welcoming and I can't really remember what beers were available but Jim had a particularly good Hopcraft and I headed to Oxfordshire with a Bandwagon (4.2% ABV) from Loose Cannon.  This was a copper coloured beer with quite a full malty flavour.

There was still time for one more pub and we headed for what I gather is a fairly new venture called Pie & Ale.  There was probably time for several more bars actually ** but I was quite happy to end the day here as I was full up with beer.  It has a couple of bars with an excellent range of cask beers as well as 50 different craft beers from around the world.  The range of pies would have been worth trying too I'm sure.  I happily ended the day with a Lime Blossom (3.7% ABV) from local micro Hornbeam.  A very good citrussy beer to finish with.

Jim was a perfect host for my first visit to the pubs of Manchester and I am delighted he could take time off from his busy schedule as he is in the middle of a big project organising the first Independent Salford Beer Festival to be held at the end of October.  It was also great that a number of other beery folk could join us and I went away with new friends and great memories of a city that is bursting with excellent pubs within a relatively small area.  If anyone is looking for a beer destination then Manchester will certainly fit the bill.  From the magnificent traditional interiors of the Marble Arch and the Crown & Kettle, to the more eccentric Bar Fringe and the quirky Soup Kitchen there are pubs to suit all tastes but they all had a common theme of a quite magnificent range of ales.

**  There was indeed time for one more because I am reliably informed that we also went to The Castle but I have no recollection of this.  I'm sure it was a tremendous pub though.