This was to be the final five as I found fifteen of the twenty entries when I visited my local Sainsburys but in a subsequent visit I found a second entry from Williams Brothers.  I have already found a 10/10 beer so will any of these final selections match up to the Windermere Pale from Hawkshead and force me to choose one over the other?  This final chapter begins in the North East before heading into Scotland and Northern Ireland so here goes.


I cannot say I have been a particular fan of the Maxim beers I have tried in the past but both this and the American Pride sound like they could be my kind of beer.  It certainly looked appealing with it's light straw colour and the aroma was a pleasing fruity hoppiness.  In the taste there were some initial sweet fruit flavours but a bit of a harsh bitterness kicked in with some earthy and some grapefruit notes.  The finish was dry.  My wife described it as 'twangy' and I really have no idea what that means but it wasn't as smooth as I like even though the flavours weren't too unpleasant.  Score 7/10. 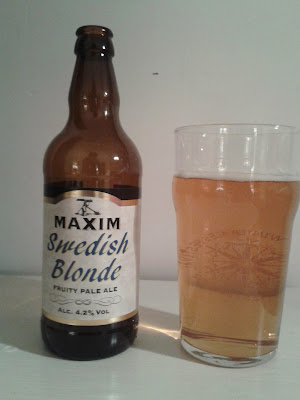 Following on from the Swedish Blonde, would the American Pride fair any better?  It was more golden in colour as I'd expect from an American IPA and it gave off a fantastic fruity aroma.  The taste was hoppy and fruity but again it wasn't particularly smooth.  It actually tasted a bit like a fruit soda.  The bitterness was quite crisp in the finish which was pleasant and overall it was ok.  I probably slightly preferred the Swedish Blonde so this one gets a score of 6/10. 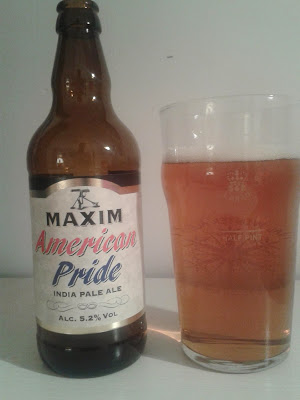 
I now cross the border into Scotland.  I have had some dreadful beers from Scotland in the past but others I have loved and very few fall in the middle.  This is my first taste of beer from this particular Scottish micro and it certainly has an interesting name.  The slogan on the bottle says 'micro brewed for maximum flavour' which is a bit meaningless when you think about it but it certainly is packed with flavour for such a low strength beer.  There is a strong citrussy aroma from this light golden beer and there are very distinct grassy notes as well as some lemony notes too.  The dry bitter finish is delightful and this beer scores highly with me but not quite reaching the peak.  Score 9/10. 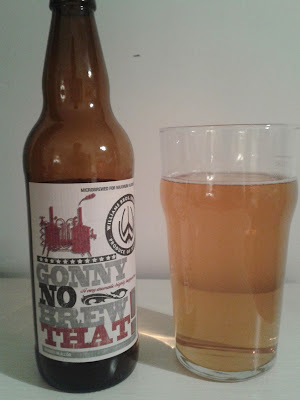 
I now head to the outer reaches of the Scottish islands with a trip to Orkney.  I was so keen to try this beer that I forgot to take a picture of it.  Oops.  I have had some lovely beers from this brewery but they have all tended to be dark and malty so a pale IPA is something different from them.  This beer is made with cascade and amarillo hops along with crystal and wheat malt.  It was golden in colour and the aroma was citrussy but not too strong.  There were definite lemony and earthy notes which gave a subtle bitterness and I found the aftertaste to be slightly sweet.  Overall it was a very pleasant IPA albeit without the intense bitterness that I particularly like.  Score 8/10. 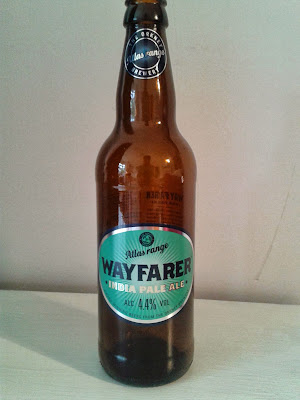 
Heading across the water to Northern Ireland now for an interesting beer. It is described as a Belfast bap wheat beer and it comes spiced with cardamom, coriander and black pepper.  It has a very pleasant light golden colour but the aroma is hideous.  Something like a ridiculously spiced marmalade is the best description I can come up with.  The initial taste is unpleasant and I wasn't convinced I'd be finishing this one.  My wife thought it tasted ok and after a second sip from myself I handed it back.  'Are you sure?' I asked.  Her second taste was less favourable and no more was requested.  I persevered however and it did improve.  It was sour and spicy in equal measure and the finish was pleasantly dry.  There was lots of coriander in the aftertaste and it was aromatic throughout.  Coriander was really the dominant spice and after getting used to the sourness it was just about drinkable.  I normally hate spiced beers and they usually end up down the sink so the fact that I finished this one probably means it was a great effort at trying something different.  I won't however be rushing to buy any more.  Score 4/10. 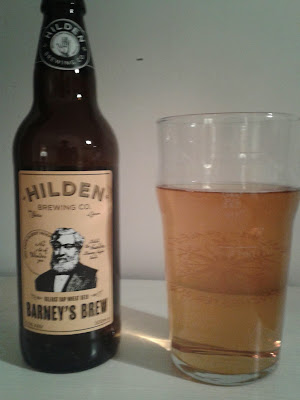 
I thought my tasting was going to end on the sour note above but a second trip to Sainsburys produced a second effort from Williams Brothers.  Hipsway is a somewhat hoppy lager with a pleasant golden colour and a nice citrussy aroma.  It was incredibly smooth and was initially a little sweet before giving way to a delightful bitter earthy finish.  It was described as being cold conditioned over a bed of cone hops and strawberries and there was a very slight strawberry sweetness in there which was actually very pleasant.  This was a much better way to end my tasting.  Score 8/10. 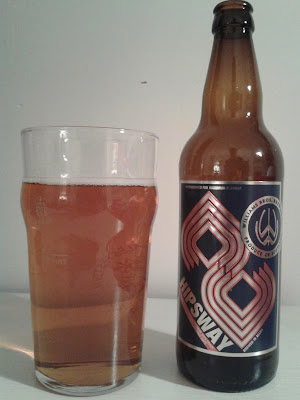 That completes my round-up of this year's Sainsburys Great British Beer Hunt 2013 and I do have a clear winner but there are four beers that are tied for second place which I have attempted to differentiate between to come up with a definitive top five so here goes.

Overall I was very impressed with the quality of entries selected and I am sure someone will tell me I really missed out with the four I did not get around to trying.  Next year I will be quicker on the uptake.
Posted by Unknown at 17:19