It has been said that I live in a beer desert.  My nearest pub (an Enterprise Inn) is about a mile away in Aldwick and it has been closed more often than not over the past couple of years due to a succession of managers coming and going.  Just over a mile away in the opposite direction there is Pagham, a coastal village which is now really part of the urban sprawl spreading out from Bognor Regis.  Pagham amazingly has five pubs and the closest of those to my house is the Inglenook Hotel. 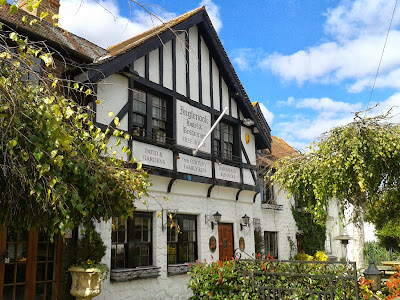 The Inglenook describes itself as a hotel and restaurant but the bar area very much has the feel of a village local.  You can enter through the hotel reception but there is a separate entrance to the bar with old Bass signs either side of the door.  The building itself is extremely pretty dating back to the 16th century.  Inside there are a couple of small bar areas for drinkers.  Both of these are very appealing with large fireplaces, beams and nooks and crannies for a little peace and quiet. 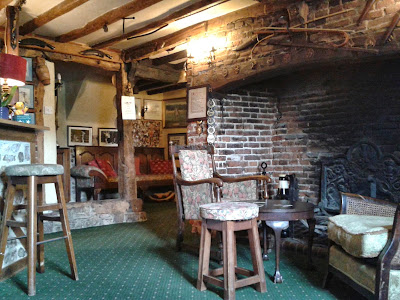 Now let me backtrack a little as to why I had to check this pub out.  After all, I have been here for a Christmas meal in recent years and it is not exactly a pub that is unknown to me.  The food is superb and at the time the beer selection was ok with Ringwood Old Thumper, Young's Special and Fullers London Pride.  However, word had got out that they had recently introduced a guest beer policy.  My local CAMRA branch were sufficiently interested to shortlist them for the next Good Beer Guide and we will be visiting the pub for a social in a couple of weeks.  So why did I have such an urgency to try them out prior to this visit?  Well, a link on Facebook captured my imagination as they were advertising their current guest ales as Sadlers Red IPA (5.7% ABV) and Marble Dobber (5.9% ABV).  I added a comment to say I had to come in and have some Sadlers (my favourite beer from my favourite brewery).  Next morning I woke up to a reply on Facebook to say it had all been consumed the night before.  What a disaster.  Wiping away the tears I thought it was still worth going in to try the Marble Dobber.  I was yet to try anything from this highly acclaimed Manchester brewer so at lunchtime I set off for a walk with high expectations.

The row of handpumps that greeted me was a lovely sight.  One side of the bar had their usual ales of Young's Special and London Pride.  The other side had the ones below.  The new guest beer policy is obviously being controlled by someone who knows their beers.  The Sadlers Red IPA had been replaced by the magnificent Thornbridge Jaipur but I had come to try the Marble so the Jaipur would have to wait for another day. 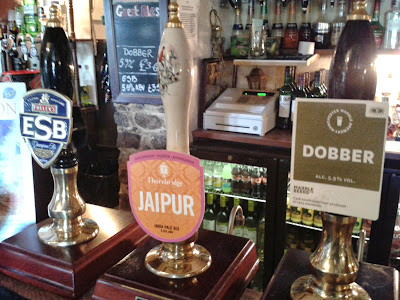 I must say the Dobber was in magnificent condition and was not too dissimilar to Jaipur.  I was told that all of the IPAs were very popular with the locals and with this sort of quality available to them it is easy to see why.  Dobber was a lovely straw coloured beer with a fantastic citrussy hoppy aroma.  The taste was a little grassy with some floral and lemony notes before it gave way to a long gentle bitter finish.  It is a stunning beer.
So I now consider myself to have a local pub.  I have tried the other pubs in the village over the past couple of years and whilst they are ok they do not come close to what is on offer at the Inglenook and they do not have such a pleasant environment in which to enjoy the beers too.  I requested Sadlers Mud City Stout and they quickly responded to say it has been added to their list.  That is another thing I like about this place.  They are keen to respond to requests from their customers via social media as well as keeping them informed of what beers are available along with what is 'coming soon'.  It is always good to have a reason to go for a walk and the Inglenook is the perfect excuse for a stroll.