I love Meet The Brewer events when they are done properly.  The Kings Arms in Arundel is a pub I had never been to before this week but it is one I will definitely be going back to.  On the last Wednesday of every month they invite a brewery to come along and tell their regulars a little bit about themselves.  They bring four of their beers along and a half pint of each is given and this highly entertaining and informative evening costs a fiver.  An absolute bargain considering there also seems to be an endless supply of sausages to enjoy once the beer has been sampled.

The Kings Arms, tucked slightly away from the town centre, is a proper pub.  Four beers were available on handpump and I had a pint of Cottage Full Steam Ahead (4.2% ABV) to warm myself up for the main event.  I've only been to one or two pubs in Arundel but I cannot imagine any of them can beat this place to be honest.  It is one of the friendliest pubs I have been in.

The Meet The Brewer was held in their cosy lounge bar area.  I arrived much later than planned after standing around on Barnham train station for a hour thanks to Southern Fail.  I am plagued by train problems on my nights out and this time it was worse than usual.  A few of my friends from my CAMRA branch joined me even though the pub is not in our area after I spread the word about the event and they were there when I arrived. 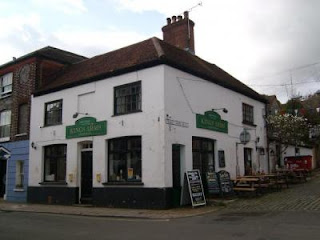 I was immediately recognised by Erik from Hop Art.  I know Erik because he worked for the same IT company as me.  He was offered redundancy in 2014 and this gave him the opportunity to follow his dream.  The Hop Art story actually began many years ago though when Erik and Tony became friends.  Their careers took them down separate paths but they always had a joint interest in beer and a desire to one day start their own brewery.  After trying out various beer recipes on a very small scale for friends and family they were ready to scale up and their first production brew was in February last year.  Their brewery is located in the village of Bentley, Hampshire near to Farnham in Surrey.  The 10bbl plant was custom designed to their requirements and next time I am in the area I will be sure to pop in for a visit.

So what about the beers we got to try I hear you all shout.  The first was their Hoppy Blonde, a 4.3% ABV pale ale.  For all their beers the Admiral hop is their main bittering hop and this one also has Simcoe and Citra.  There is another one in there too but I've lost the piece of paper I wrote my notes on so I'm relying on my hazy memory.  It is a lovely beer with a good citrussy hit from the Citra hop which is always welcome in my beer glass.

The Golden IPA (4.5% ABV) came next.  Similar hops to the first one I think except the Citra makes way for the UK Cascade variety.  They had to reduce the ABV of this beer for local tastes but in bottles it is 5.2% ABV and I will no doubt prefer that one.  However, this is still an excellent beer with a rounded fruity hoppy character.  Much more complex actually than the Hoppy Blonde and I thought it tasted quite rich considering the lowered ABV,  Very difficult to say which one I preferred to be honest.

For the third beer we got to try their red ale, Red Cap (4.4% ABV).  The Bramling Cross hop is used in this one and whilst it is a decent beer it wasn't quite to my taste so much.  It is quite sweet and fruity but when it comes to red ales now I like hoppy ones.  Blackcurrant came through as the main flavour for me with this one.  As one of my friends quite rightly said though, if this beer was available alongside some of the popular national brands you would choose this one because it is still a beer that challenges the taste buds.

For our final beer we up the strength and take a peak at Erik's Belgian roots.  Hoppist (6.1% ABV)  is their interpretation of a Belgian dubbel using the Rochefort yeast I think if my memory serves me right.  This is a lovely warming beer and we have put an order in for our beer festival in May as it impressed a few of our members on a recent pub visit when they got to try it.  It impressed me tonight with plenty of complexity with notes of rich dark fruits and toffee.

To round off the evening there was a quick quiz to check that everyone had been listening and my attentiveness paid off as I won a bottle of the lovely Hoppist to take away with me.  It was a really fabulous evening and I will be taking note of future Meet The Brewer events at this superb pub.  It is a great way of showcasing a different brewery each month so a big well done to the team at the Kings Arms.

Finally, thank you to Erik and Tony from Hop Art for taking the time to drive down from Hampshire with their ales for us to enjoy.  I no longer see Erik in the office every day but I'm sure our paths will continue to cross in the great world of beer.