Supermarkets are beginning to see 'craft beer' as a possible growth area in what is otherwise a difficult marketplace due to the onslaught from discounters Aldi and Lidl.  However, even these discounters are now trying to compete in the beer market.  I don't have an Aldi near me but I've been trying some of the new beer range from Lidl to see how they compare to the offerings from other supermarkets.  I am not going to cover Tesco and Sainsburys a great deal in this post other than to say I think their beer ranges have stagnated in the past 12 months, particularly the latter.  I rarely spot anything worth trying in either of these stores.  Waitrose is pretty much the same too.  They have some decent locales but they come at a price and rarely discounted.

I will begin with Morrisons.  They were always quite boring when it came to beer and, as with Tesco and Sainsburys, tried bringing in their own range of beers brewed by national brewers in the main such as Marstons.  Last month they revamped their selection at my local store by introducing a 'craft beer' shelf.  Priced at £1.65 each or 4 for £6 this selection also included cans (Thwaites 13 Guns and Adnams Crystal Rye).  They are sticking to mainly known and popular brands such as Sierra Nevada, Goose Island and Lagunitas from the US, Pistonhead from Sweden as well as a few from the UK such as Brewdog and Hardknott.  At these prices these are excellent value for what is quite decent beer and my favourite of all by far is the Azimuth IPA (5.8% ABV) from Hardknott. 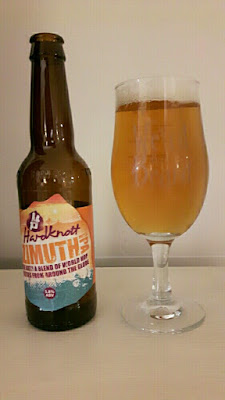 This beer is full of both tropical and citrusy fruit flavours with a great bitter finish.  This is a beer I will pick up again at the bargain price of £1.65 and also from Hardknott, at  the same price, they have Infra Red (6.2% ABV), an American Red.  I will be trying this soon too as it is now in my cupboard.

So top marks to Morrisons for giving quality at a very decent price.  Let's see how this compares with my local discount store, Lidl.  In the past they have sold beer from the Marstons family (including Wychwood, Ringwood and Jennings) and Shepherd Neame at bargain basement prices ranging from 99p - £1.29.  Having tried most of them I would say they are all overpriced.  Beer to avoid for fear of damaging your palate.  Now they have brought in a bottled beer range from micro brewers all over the UK.  The prices have increased slightly (£1.29 - £1.49) but has the quality gone up?  Here's a quick appraisal of the ones I have tried so far. 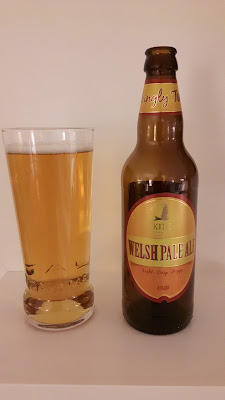 This one from the Kite Brewery, a 4.1% ABV pale ale, was described as light, crisp and hoppy.  I could not really use any of these words to decribe what I was drinking here.  It had a sickly malty sweetness dominating over any hop character that may have been present.  Surely things can't get worse than this one? 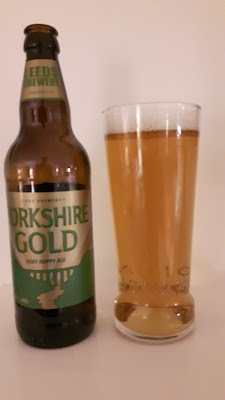 I've enjoyed something from the Leeds Brewery before so I had higher hopes for this one.  Having said that I am not a fan of golden ales and that is the case once more.  It was drinkable so an improvement from the Welsh Pale Ale but that is all I can say about it really.  Still too much sweet malt character with little in the way of hop notes. 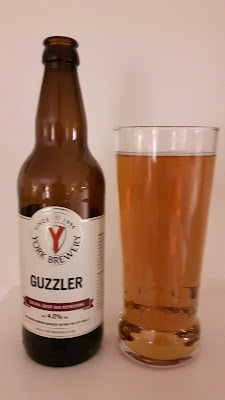 The third one comes from another Yorkshire brewer, the York Brewery.  I have had plenty of decent beer from them in the past and I have enjoyed the cask version of this beer, Guzzler (4.0% ABV), previously where I described it as a nice golden hoppy bitter.  So what happened to this bottle then as I actually found it to be quite malty with toffee notes and only a slight bitterness could be detected and far from the promised grapefruit notes.  Very disappointing. 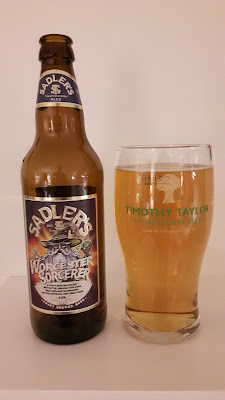 I love Sadlers beers so surely I can't go wrong with this one?  Worcester Sorcerer (4.3% ABV) is not my favourite from Sadlers but it is what it says it is.  A very well balanced golden bitter brewed with local hops and this was by far the best of the bunch so far.  At £1.29 this is one I will happily pick up again.  A very decent beer. 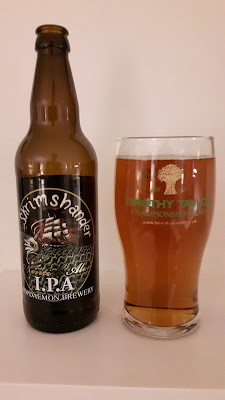 Finally I picked up this one from Kent brewer Hopdaemon.  The beers I've had from this brewer before have been decent.  This beer has a nice spicy hop character but there are notes of tobacco and something else that wasn't pleasant either in the finish.  Not the worst but, once again, a beer I won't want to try again.  My wife gave each of these beers a try too and was much less complimentary than me.  I think she is becoming more of an expert on quality beer than she realises.  There are certain styles she doesn't like at all but generally appreciates quality and she could detect none of that here.

Overall my haul from Lidl was very disappointing.  Top marks for trying to expand their range but the quality just isn't there.  I'd much rather pay two or three times the price of some of these beers for something drinkable.

Finally let's look at Marks & Spencer.  I have favourably reviewed some of their M&S range previously but they are not resting on their laurels.  Firstly, they are now selling branded beer with bottles from Siren (Soundwave and Undercurrent), cans from Fourpure (Pils and Session IPA) and this gem from Sierra Nevada.  Morrisons had the Sierra Nevade Pale Ale in their range but I'd much rather pay the extra for the Torpedo Extra IPA (7.2% ABV).  This one at M&S was still less than a couple of quid though so I didn't have to pay a lot more for it. 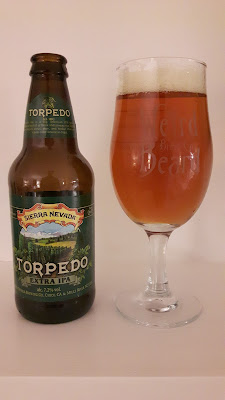 They have also introduced a 'craft' range.  Own branded 330ml bottles from a number of decent brewers.  To be honest the ones I've had in this range have been largely disappointing.  Not disappointing as in the Lidl sense.  Most of those were unpalatable.  These were just not up to the quality I was expecting but they weren't unpleasant.  The Island Hopper Pale Ale brewed by Windsor & Eton had no body whatsoever and was largely flat and lifeless.  Flavourwise it was ok.  Some orangey marmalade notes sat alongside some burnt caramel. 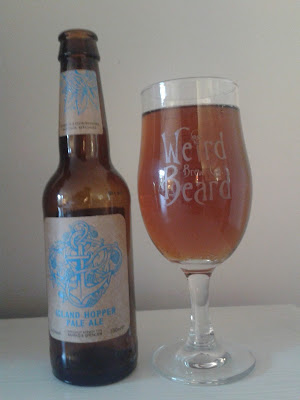 The Double Hopped Citra IPA (5.9% ABV) from Oakham was one I was really looking forward to but this was again a bit lifeless too.  It had nice citrusy notes of lime alongside a tropical fruit sweetness.  Whilst it is a decent beer it does not compare favourably with the 4.9% ABV Citra IPA in their 500ml bottled range, also brewed by Oakham, which is quite magnificent. 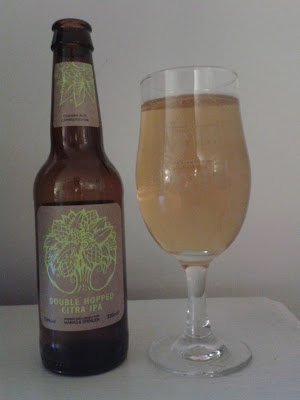 An improvement is the Battersea Rye (5.6% ABV) from London brewer Sambrooks.  This beer was warming with rich fruits, treacle toffee and a slightly smoky edge to it.  Likewise, the Maritime Salted Caramel Porter (5.5% ABV) from Meantime which I had last night was interesting and not as bad as I was expecting it to be.  Salty and spicy with notes of toffee and chocolate.  This one also had a good level of carbonation too. 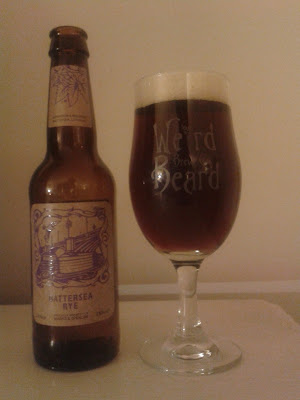 Another one in this range that had no life to it after opening though was the Ash Brook Red Lager (4.7% ABV) from Freedom Brewery.  Perhaps they've been asking for low levels of carbonation because it has been common with most of them to some extent.  The beer itself was interesting with a strong malty character, a little nutty and plenty of toffee notes.  The texture wasn't quite right though which spoiled it for me. 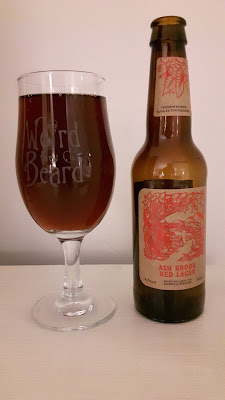 There has been two stand-out beers for me that I have tried from M&S recently.  The first of these is from Warwickshire brewer Purity.  The Black IPA (6.5% ABV) is lovely and smooth with a great malty backbone to it.  The aroma was hoppy but these flavours were a bit more subtle in the taste but balanced well with the roasted malt.  I liked it a lot as did my wife. 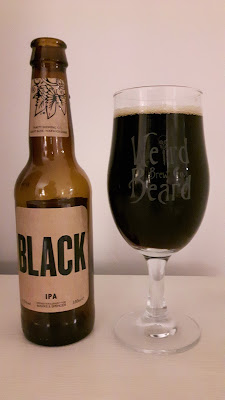 The Greenwich Black IPA (5.7% ABV) from Meantime in the 500ml bottle range had many similarities to the Purity Black.  Again their was plenty of roast malt character and this beer was particularly dry in the finish which I had no objection to. 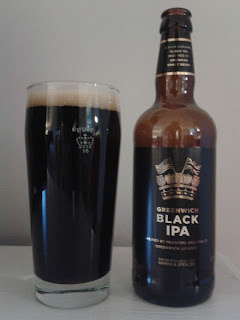 I have it on good authority that the M&S range is far greater at their larger stores which I hope to check out in the near future.  For me they are giving the best deal when it comes to beer.  A varied and interesting selection.  Their own branded ranges, both small and larger bottles, are brewed by some of my favourite brewers and the quality is certainly there.  You have to pay a bit extra but it is still largely good value.  Morrisons have certainly done well with the prices they are selling known brands at.  You cannot go wrong with any of them at the prices they are selling for so if you like the beers they are stocking it's a winner.  Lidl are trying but for now they are not winning.  That to me is patently obvious.

I will conclude by saying that not one supermarket can compare with a specialist beer shop.  If I lived close to one I would rarely buy beer from anywhere else.  Thankfully I have a December visit planned to Bitter Virtue in Southampton.  It is time to finalise my Beer O'Clock Show '12 Beers of Xmas'.