It is nearly ten years now since brewing began at Saltaire Brewery.  The brewery can be found in West Yorkshire close to the UNESCO World Heritage site of Saltaire village.  The brewery is situated in a beautiful tall Victorian building that was once an old generating hall.  This provides ample room for both the 20bbl plant and a mezzanine bar.  There is also a brewery tap and a beer club to keep their loyal drinkers satisfied and I can imagine this is hugely popular.

I first became aware of Saltaire Brewery a couple of years ago when I discovered their superb Triple Chocoholic Stout (4.8% ABV), the smoothest, chocolatiest stout you could ever imagine.  Since then I have enjoyed their bottles whenever I have seen them, which unfortunately is not often enough as it is the online beer retailers I have to rely on for their ales.  I therefore had to choose three of their beers that I had not tried before for this competition as the previously mentioned stout along with the Stateside IPA (6.0% ABV) would have given them 20/20 to begin with and so a distinctly unfair advantage over the others.

I began my Saltaire session with this American pale ale brewed with Cascade and Centennial hops.  It is not really worth asking my wife for an opinion on any beer with American hops usually as it always tends to be negative.  This was indeed the case although she did comment favourably on the floral aroma but the taste was a bit bland she felt.  There were decent citrusy notes of orange and grapefruit but I too found the taste a little lacking in flavour but there was a fresh, crisp, dry finish to it with quite a strong bitterness.  It is a highly drinkable and refreshing pale ale and I will give it a score of 7/10. 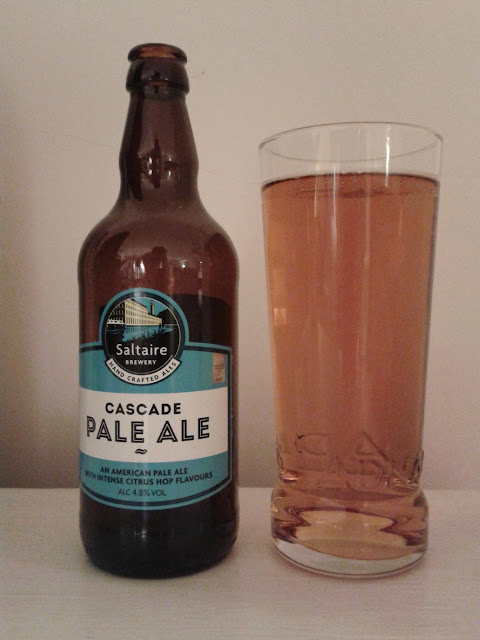 Now we move on to one of my favourite hops.  This particular beer is made with 77% wheat and 23% pale malt.  It has a somewhat light golden colouration to it and this beer my wife did not like at all.  I think the word 'vomit' was mentioned so I knew immediately that this beer had more of the flavours I like!  For a mainly wheat beer it is actually very clear and it had a nice aroma with hints of the orange I associate with the Amarillo hop.  There was more of a sweetness to this beer than the Cascade pale above but the bitterness was always there in the background and the finish was dry and bitter.  Quite soft citrusy notes with this one rather than 'in your face' and it was a very enjoyable beer and one step up from the first so a score of 8/10. 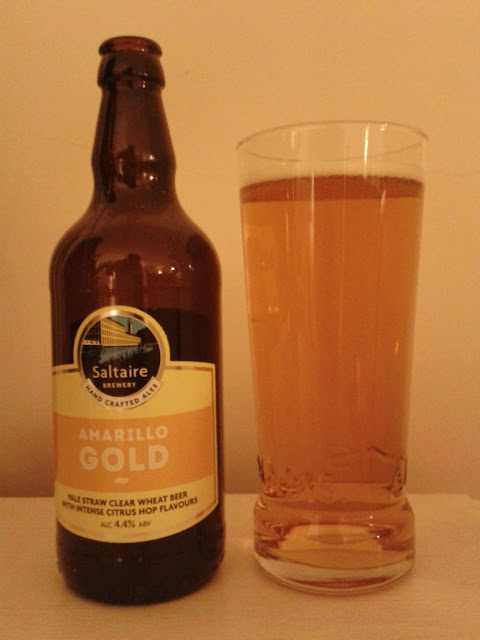 This final beer was brewed to celebrate the visit of HRH Princess Royal last  year when she opened the new fermentation facilities.  This is a beer that uses a blend of four traditional English hops and just by smelling it you know it is a strong ale.  My wife described the aroma as warming.  I would describe it as a little boozy.  This is where our tastes meet up.  My wife raved over this beer and I loved the complexity of the flavours.  There are lots of soft fleshy fruit flavours here with sweet orange, peach, apricot and I even detected some banana in there too.  There are also hints of burnt caramel along with a spicy character to the bittersweet finish.  Smooth, rich, warming and quite intoxicating.  A lovely complex beer to be savoured slowly.  This one picks up a score of 9/10. 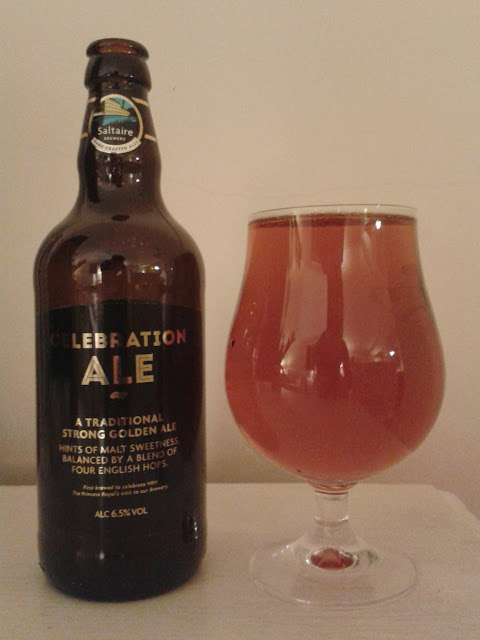 My final score is for the overall image of the brewery in terms of the beer labels, pump clips, website and overall wow factor.  I love their logo, very distinctive and meaningful to the brewery and its' location.  The labels are clear and the logo stands out making it easy to spot their beers among the shelves.  The website is superb and I love the fact that they have a brewery tap that caters particularly well to their regulars via a members only beer club but which still welcomes visitors.  There is nothing at all to dislike about Saltaire.  Great beers, obviously a great setting in such a lovely historic building  and a modern ethos that sees them embracing all that is good about the current brewing climate.  A score of 9/10 here which gives them an overall total of 33 points which puts them in second place.

Next time I will be reviewing Yorkshire Heart.