The 25th Sussex CAMRA Branches Beer & Cider Festival began in Brighton yesterday.  With the previous venue, Hove Town Hall, no longer available it was off to Brighton and the Corn Exchange, which is part of the Brighton Pavilion complex.  It is a grand hall but somewhat smaller than the previous venue which had a number of rooms available.  This time it was set up in the one large hall which meant a few changes this year.  No entertainment, no trade session and an increased entry cost as I understand the smaller venue came at a much higher cost.  That's Brighton for you. 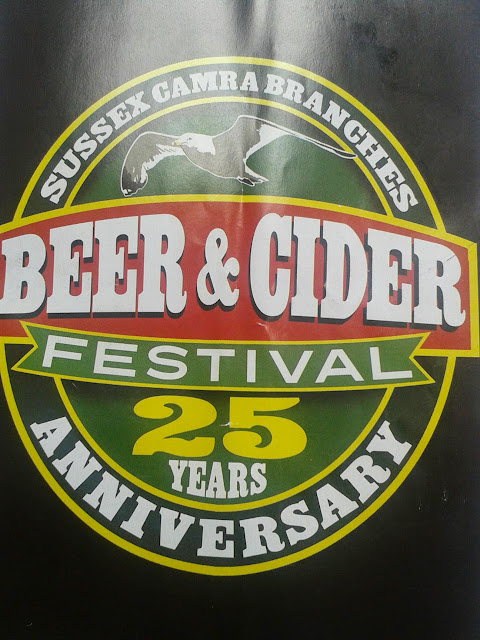 I did miss the intimacy of the previous venue.  With separate halls you could hide away from the music and sit and relax a bit more.  The Corn Exchange is somewhat cavernous with high ceilings and later on it was starting to get a bit crowded, particularly down the far side with the bottled beer stand.  However, with one central bar area serving from both sides all the beers and ciders were easily accessible. 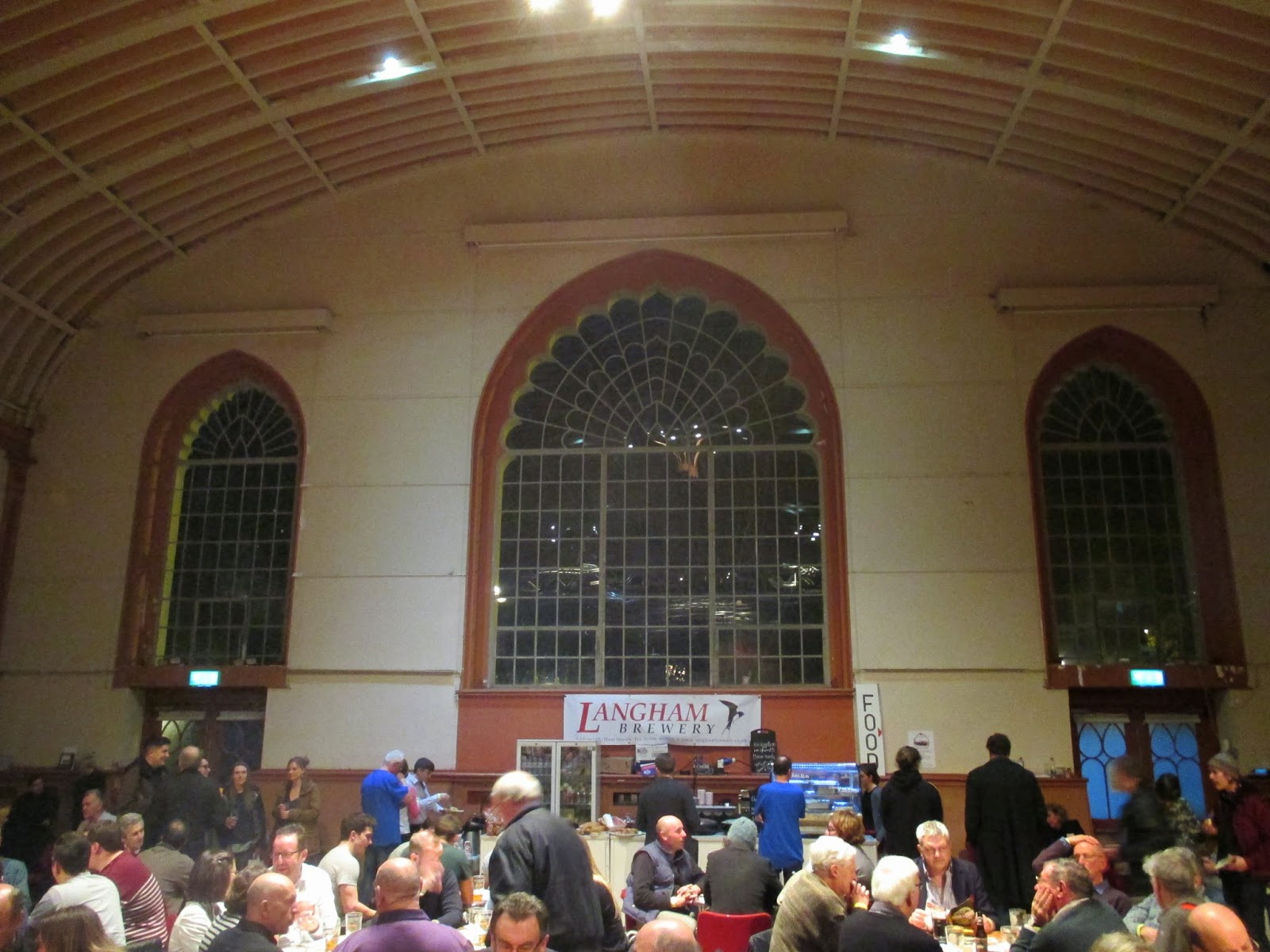 There are over 150 beers and about 50 ciders to choose from and there were plenty of volunteers manning the bar to ensure people weren't kept waiting.  None of the beers were being kept back so if you are going along today or tomorrow I hope the beers you want are still available.  If not, get there earlier next year!  I counted 41 breweries representing the county of Sussex in the programme among all of those beers so it is a great showcase for the local breweries and indeed I recognised some of these brewers walking around the hall enjoying the beers despite there not being a trade session this year. 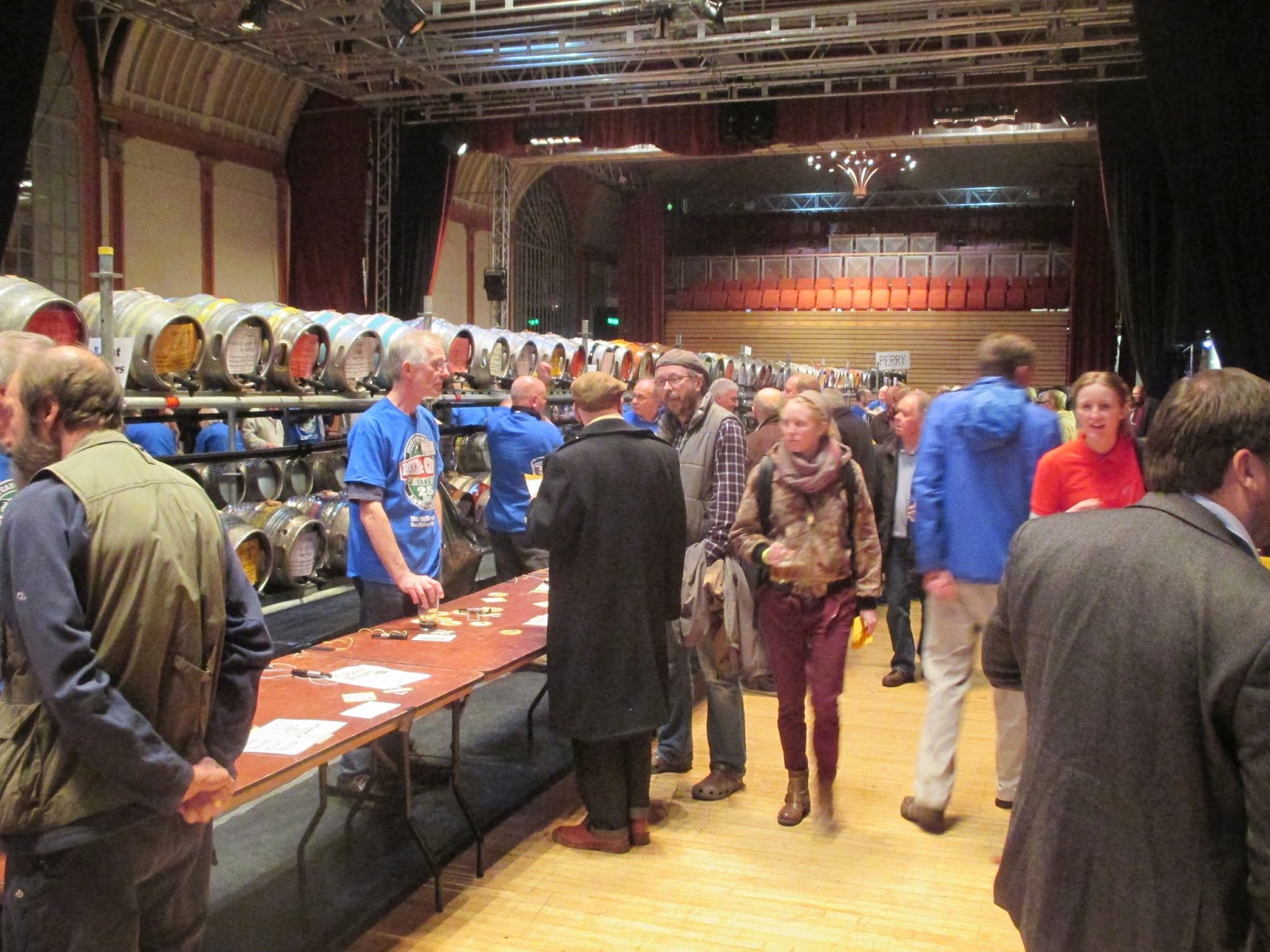 As usual at beer festivals I had a mix of pints and halves.  Thirds were being served and there was one half which I could have done with less of but I'll come to that later.  I started with a Dark Mild (4.0% ABV) from Manchester's Boggart Hole Clough Brewery (quite a mouthful that).  A Boggart is a mischievous imp, a Hole is his home and a Clough is a northern word for a deep wooded ravine so there you go.  The beer was a wonderful chewy, nutty mild and I'm glad I had a pint of it as it was a lovely beer to begin with. 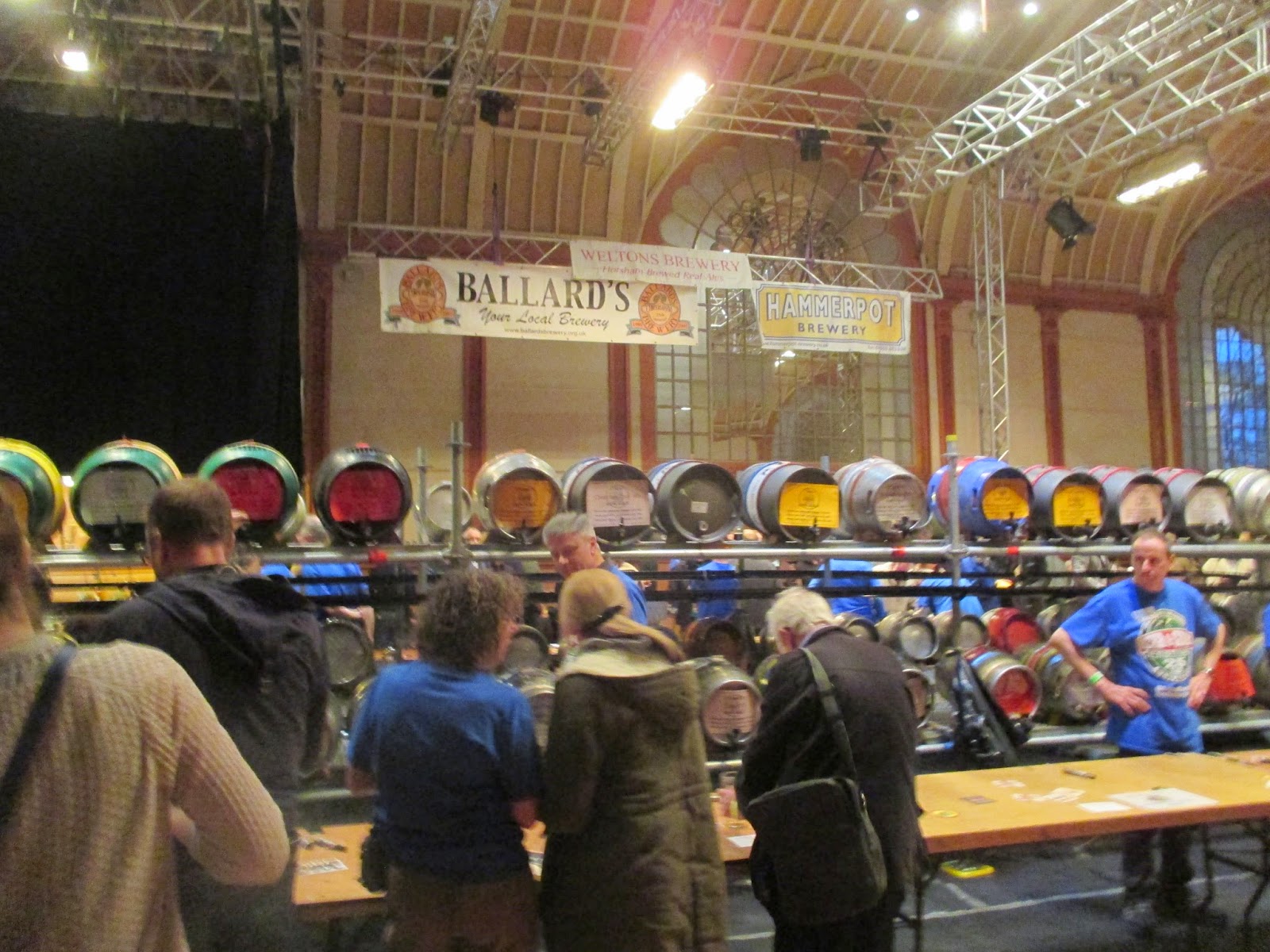 I tend to avoid local beers at local beer festivals as I can get many of them fairly easily but for my second beer I did try a half of Session IPA  (4.0% ABV) from a very new Brighton brewery called Brick House.  So new in fact the brewery does not exist on Untappd.  The beer was pretty good though.  A rich full-bodied IPA oozing with tropical fruit flavours with the aromas to match.  A promising start indeed from this lot.  Staying on the light, hoppy side I then had a half of Ilkley's Mary Jane (3.5% ABV).  This is a long-time favourite session pale ale of mine and it did not let me down.  Perfect condition.  Light, citrussy, hoppy, crisp and refreshing.


Taking a break from the halves I had a pint of my next beer, the Kelham Island Pale Rider (5.2% ABV).  Kelham Island from Sheffield have been around for years now and they also led the way with this award winning pale ale that comes loaded with American hops despite coming out at a time when brown beers were the norm.  It was my first taste of this beer for years and years and it has lost nothing of its class.  The beer was in fact Champion Beer of Britain way back in 2004 and I followed this up with the Champion Beer of Britain from 2013, the Elland 1872 Porter.  This is a beer I had never tried before amazingly so I only had a half but oh how I wished I'd had a pint.  It is a stunning porter.  Plenty of coffee, chocolate and dark berries over and above the vinous qualities imparted through both the richness and the aroma.  I will be looking to enjoy more of this beer in the future. 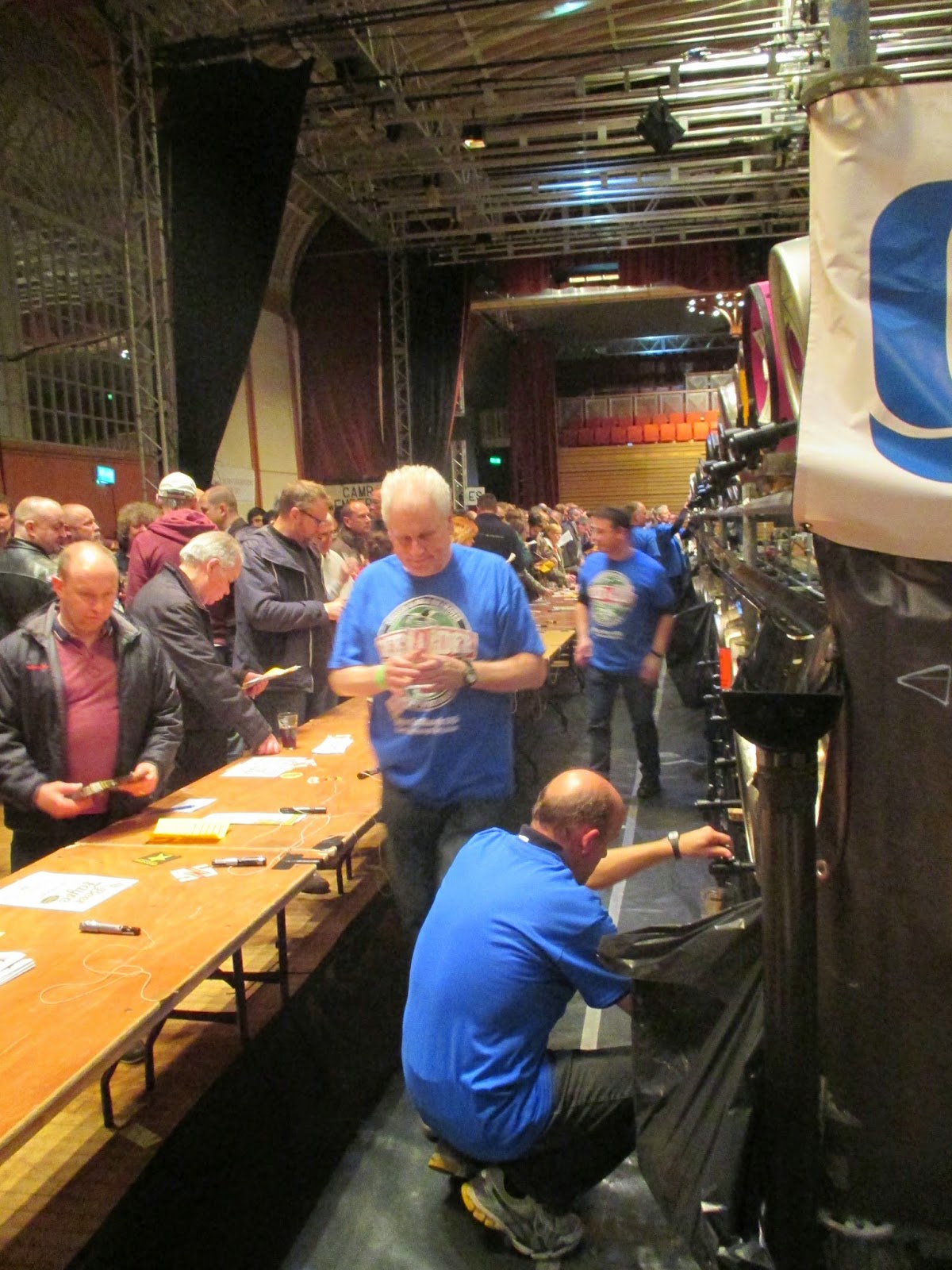 Five beers in and I was yet to try a duffer so it had to happen eventually.  For my next half I headed to the Manchester area again and the Phoenix Arizona (4.1% ABV).  Perhaps my taste buds had been affected now by the 1872 Porter but I detected no bitterness to this beer at all.  It was sweet, floral and sickly and I struggled to finish it.  Never mind.  With tokens now running out I finished off with a pint of LocAle with the 360 Degree Pale #39 (3.9% ABV).  This is my first beer from this brewery and it did have some citrussy hoppiness to it with hints of grapefruit and lime.  Not the best of beers but it had come on top of quite a range so difficult to judge.  Certainly a brewery I will look out for in the pubs.  I really should plan these evenings better though.  The 1872 Porter was the one I should have finished with but we live and learn.

Overall, the festival is well worth a visit.  Lots of excellent beers and, judging by the ones I had, all in perfect condition.  Beers to suit all palates and, for the strange people, some ciders and perries too.