For Christmas this year I received a Westmalle gift set.  This consisted of one of their beautiful glasses along with a bottle of their dubbel and one of their tripel.  I quickly consumed the tripel (9.5% ABV) but last weekend my brother visited with his family and he brought a bottle of the tripel for me so I was able to drink them both together one evening.  Not literally together of course, rather one after the other.

My brother is the man responsible for getting me into Belgian beer many years ago when he took me to Bruges on a day trip where we filled his car with all sorts of goodies.  I've never been back but my love of Belgian beer has never gone away.  The simple thing about Belgian beer is how timeless it seems to be.  The beers I fell in love with twenty plus years ago still appear the same to me as they did then.  Westmalle brewed a dubbel and a tripel and they still brew them today.  Why change something that is so damn good I guess?  Orval is the same (my brother also gave me a bottle of this last week too).  The ranges of Chimay, Kwak, Rochefort and Duvel are all the same as they once were too.  I am far from an expert on all beer matters Belgian of course but these are beers that I love and always look out for when I get the chance.  My brother insists that Westmalle Tripel is perfection when it comes to beer and it is probably my favourite of all the Belgian beers I have enjoyed over the years too.


To begin with though I opened the Dubbel (7.0% ABV).  The right glass is imperative of course and the Westmalle glass is perfect.  The raised ring of glass on the stem with the Westmalle name matches the same raised ring of glass on the bottle.  The wide mouth of the glass allows you to sip and savour it at a leisurely pace and this is a beer well worth taking your time over. The monks of the Abbey of Our Lady of the Sacred Heart, better known as the Trappist Abbey of Westmalle, have been brewing beer since 1836.  They introduced the terms Dubbel and Tripel for their two beers and these terms are now widely used.  The terms are not indicative of strength but of colour.  The Dubbel is a brown ale and the Tripel is pale and more hoppy.  The current dubbel is derived from a recipe first brewed in 1926 and it has a lovely malty aroma.  The beer is instantly warming and a great beer for winter.  There is a light carbonation to it and the immediate thought is of rich spiced fruit cake.  It does not taste particularly boozy and the finish is dry with a strong malty chocolate notes.  It really is a tremendous beer.

That brings me on to the Tripel.  If the Dubbel is tremendous then the Tripel is an absolutely stunning beer.  At 9.5% ABV it is a beer to be enjoyed slowly of course but, as with the Dubbel, it does not taste particularly boozy and is lightly carbonated so it can be consumed at a dangerous pace.  The origins of the Tripel goes back to 1934 and the current recipe has largely been unchanged since the mid 1950s.  The beer is only brewed with Pilsner malt and the hops are Tettnanger, Saaz and Styrian Goldings.  It has an aromatic aroma and the immediate flavours are citrussy with lemon, lime and particularly orange all evident.  There is a slightly tangy middle with spicy hop notes and the finish is long with floral and aromatic notes creeping in although the citrussy orange flavours never go away. 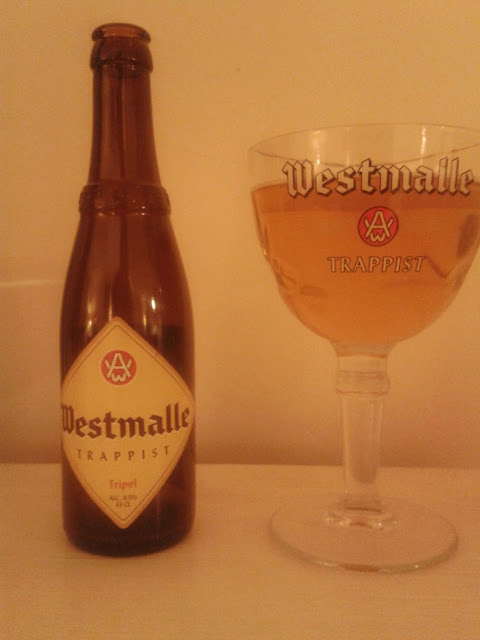 The timeless qualities of Belgian beer continue to bring pleasure to beer drinkers all over the world and in my family it seems Westmalle is the cream of the crop.  I think another invite to my brother to come over is not too far away.