A week of quality cask beer

I will always maintain that cask is best when it comes to beer despite the many wonderful craft keg beers now available.  Where I live it is not as if I have much choice because craft keg is not widely available in the pubs of West Sussex.  I go to pubs as often as possible because pubs are the best places in which to enjoy beer.  Yes I do have a local pub but not in the sense that it is the pub I frequent regularly.  I probably go there once or twice a week at most.  It's walking distance, it is Good Beer Guide listed and the beer selection can be very hit and miss.  I don't particularly mind that because that is what happens when you always choose a beer you are unfamiliar with if one is available.  Some pubs are more of a struggle for me because they simply do not deliver in terms of beer choice.  I am constantly amazed at how many free houses are so ignorant when it comes to beer.  This is evident around here with the amount of Doom Bar on sale.  There is nothing at all that depresses me more than when I walk into a free house and I see that on the bar.  That was not a problem for me last week though as I only came across it once.

The CAMRA social last week took us to Chichester which is about 10 miles from my home.  It wasn't my turn to drive but these pubs would also be accessible to me by bus or train so it is a good destination in terms of accessibility.  The first pub, The Bell Inn, is GBG-listed and despite being an Enterprise Inn it has a good beer selection.  It is located just outside the ring road and very close to the Festival Theatre.  A very cosy local and a proper pub.  My choice was the Autumn-Ale (4.4% ABV) from local micro Langham.  To say this beer tasted fresh and full of flavour would be an understatement.  Brewed with local Sussex hops it is a rich chestnut coloured beer with a fruity spicy hop character and quite a bittersweet refreshing finish.  Delicious.

The next two pubs are not in the latest Good Beer Guide but are probably contenders for next year.  The George & Dragon is a Punch tavern and again not far from the Festival Theatre.  This pub is more trendy with modern decor and four handpumps containing Tim Taylor's Landlord and Sharp's Doom Bar (yes there it is again) and Atlantic (the acceptable face of Sharps) and locale Arundel Gold.  It is a long time since I have had a pint of Landlord so I opted for that.  It was perfectly acceptable without setting my taste buds alight.

Finally we made our way to The Belle Isle.  This modern cafe, bar, restaurant opened up a couple of years ago and I always dismissed it as it appeared to be more of a restaurant than anything else but it certainly caters for the beer lover now and it is fast becoming my favourite place to drink in Chichester.  They always have three beers available on handpump which seem to change with every visit along with a first class range of bottled beers.  Tonight I had my first taste of Dark Star's Art Of Darkness (3.5% ABV).  This black ale has an abundance of roast malt character but with a lovely hoppy aroma too.  It reminded me of a black IPA but without the strength of those beers.  This beer is pure genius.  It is full of rich fruit and spicy notes along with coffee and chocolate notes from the malt to give a complex, full flavoured black beer made all the more drinkable by the low ABV.
I should have ended the night with the Art of Darkness but I didn't want to miss out on it so it took my taste buds a little time to adjust to Tiny Rebel's Fubar (4.4% ABV) which I tried next.  This american pale ale was more floral than some of the stronger APAs I enjoy but it had a lovely dry bitter finish  and it was another superb beer to round off what was an excellent evening of cask beers at their very best.
That seemed to set the tone for the rest of the week really.  Ten miles in the other direction from me is Worthing and the Brooksteed Alehouse, the new micropub.  This is already my favourite pub in West Sussex but it epitomises for me what the new micropub revolution is all about.  A constantly changing list of beers all served in perfect condition from a temperature controlled stillage area in an environment perfect for relaxing and enjoying the beer among like-minded souls.  A lunchtime visit gave me the chance to try Harviestoun Schiehallion (4.8% ABV).  It is rare you will find a lager for sale in a micropub but it is also rare that you will find a real lager that appeals to the beer drinker.  I've enjoyed this beer in bottles before and in cask it was superb. 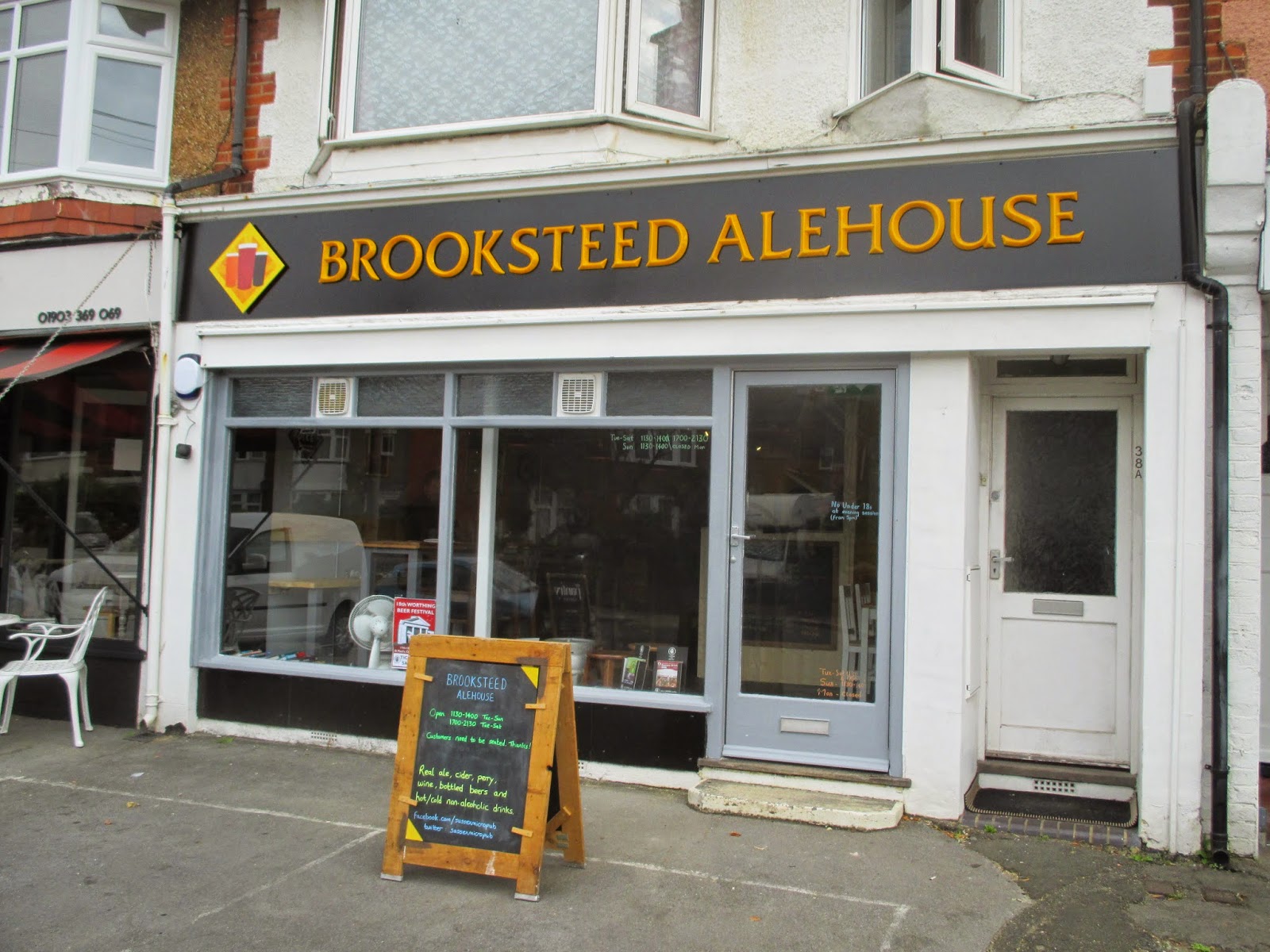 Last Friday I offered to take my wife out for a meal to a Thai restaurant in Worthing which just happens to be next door to the Brooksteed Alehouse.  A cunning plan.  After consuming what was a fabulous meal there was obviously time to round off the evening with some beer.  I began with a locale from the new Goldstone Brewery near Brighton.  Their Amarillo is a 4.5% ABV golden ale that has everything I love about this hop.  Citrussy with a very dry strong bitter finish.  Moving swiftly on I tried the Graffiti IPA (5.0% ABV) from an even newer micro, the Cornwall based Firebrand Brewing Company.  This beer was not as bitter as the Goldstone Amarillo but it also contained the Amarillo hop along with Summit and Centennial.  There was a sweeter malty base to it and the citrussy hop flavours provided a bitter middle before leading to a refreshing fruity bittersweet finish.  My wife was struggling with the amazing Oakham Citra so I unfortunately had to finish that off too before heading for home.

Being an active CAMRA member life is not always about visiting your favourite pubs.  However, last Friday I decided to visit my old local for lunch.  I had not visited The Inglenook near Pagham since moving house in July and they had gone a bit quiet on Facebook so after making the decision to go and make sure they were still selling great beer they put out a new Facebook post which confirmed that they indeed were.  Of course I still had to go to make sure it was being served in top condition.  Faced with a choice of Dark Star NHA Pale (5.5% ABV) or Magic Rock High Wire (5.5% ABV) I chose the former simply because it was something I am yet to try.  This beer was designed by National Homebrewing Awards finalist James Morton and loaded with Amarillo and Citra hops this beer was never going to disappoint.  It is very drinkable and refreshing with plenty of light citrus flavours swirling around.

Some weeks you can fail to find a single beer that matches up to those I had last week.  On my scoring scale the Landlord was the only beer that would not have scored a 9/10 at the very least.  The two from Dark Star though get top marks.  So to all those free houses in West Sussex please can you now follow suit and ditch the decidedly average and check out some quality beers, most of which are brewed close to home.