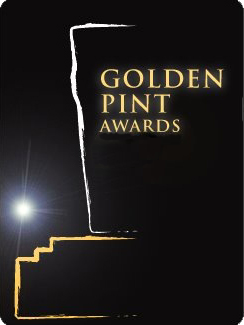 The year is coming to a close and I thought it would be a good idea to post my very first Golden Pint Awards.  Each winner is accompanied by a little explanation as well as some close seconds where applicable.


This is the most difficult category for me.  I have probably consumed over 200 different pints during the year and a number of these achieved my Gold Medal award.  The Source is a wonderful hoppy beer full of delightfully crisp citrussy and floral flavours for such a low ABV.  For someone who finds it difficult to consume anything that is less than 5.0% ABV this certainly stood out for me.

There are some very close seconds in this category.  Some of these are (in no particular order) Magic Rock High Wire (5.5% ABV), Marble Dobber (5.9% ABV), Langham Arapaho (4.9% ABV), Buxton Gold (5.2% ABV) and Dark Star Revelation (5.7% ABV).  In addition to these, there are others that are mentioned below from Moor Beer and Bristol Beer Factory that came very close to scooping the top award.


It could be argued that this beer won by default because it is the only UK keg beer I have consumed in 2013.  However, it really is a lovely beer and disproves the argument that lager is bland and tasteless and I promise to check out more keg beers in 2014.


Joint winners for this one.  Redemption would have won this award last year and I enjoyed more of it at the start of 2013.  It is an absolutely stunning old ale with a lovely deep ruby colour to it.  Sadly it was only brewed the once and there is no more available.  Please please please brew another batch !!

The Chief from Ilkley Brewery is a beer I have enjoyed in the past week.  It is a beautifully rich triple hopped American IPA full of sweet mango flavours.  In the past I have enjoyed both the Lotus IPA and the Mary Jane IPA from Ilkley but this surpasses both of them.  Awesome.


I enjoyed this beer on holiday in the White Mountain Hotel, New Hampshire.  This beer was bursting with grapefruit and lemon citrussy flavours.  I absolutely loved it.


Only those crazy Americans can put an 11.2% ABV beer in a 22fl oz bottle but if you're only going to drink one beer in an evening then this is the one to choose.  A truly superb barley wine full of rich complexity.  This was probably the one beer I was looking forward to the most in the US and I was not disappointed.


I enjoyed a pint of this in The Barley Mow, Bristol back in June.  It is one of only about ten or so collaborations I've had this year but this beer did receive top marks from me at the time.  It had a gorgeous hoppy aroma and the taste had a strong lemony citrus tang with plenty of lasting hoppy bitterness.  It was a really stunning beer.


This is in contrast to the reduced strength Ringwood Old Thumper which would probably be my most disappointing beer of the year.


I like breweries to have a branding that has a common look and feel across their range and the Ilkley Brewery achieves that with labels with a classy look.  When you see them you instantly know it is Ilkley.

Bristol Beer Factory
This was a difficult choice.  Last year I was working in Stratford-upon-Avon and I was drinking lots of the lovely Sadlers Ales.  This year I have enjoyed being back at home and exploring my local breweries and two of the best are Langhams and Dark Star.  However, the winner is Bristol Beer Factory simply because they have received the most number of Gold Medals from me this year.  I have enjoyed all of their beers that I have tried and three of them received my top award - Acer (3.8% ABV), Bitter Californian (4.5% ABV) and Independence (4.6% ABV).  In addition, their bottled Ultimate Stout (7.7% ABV) was yet another stunning beer that came close to winning my best bottled beer award.

I've always loved Shipyard Ales and I enjoyed a nice selection of their beers when I visited New England this year.  Their Double Old Thumper has already been mentioned but their Blue Fin Stout is an absolute gem as well as their Export Ale.  They brew many more I would love to try.

Another winner by default as their White Cross IPA (5.8% ABV) is the only beer I have tried from a brewery that has opened in 2013.  It is a superb hoppy IPA brewed with American, New Zealand and Australian hops and I am looking forward to drinking more from this new Cornish brewer.

The Barley Mow in Bristol is without doubt my pub of the year.  I was lucky to be sent to Bristol for a few weeks and I enjoyed numerous visits to this pub which is owned by the Bristol Beer Factory.  With 8 cask ales and 10 keg beers always available along with some first class food this pub is simply amazing.  You can read my review of it by clicking here.
A not too distant second is my local pub, the Inglenook Hotel.  It is on the shortlist for the 2015 Good Beer Guide and I will certainly be voting for it.  It has always been a decent pub but their guest beer range is now something to behold.  They love their strong IPAs (as do I) and in the past few months I have seen superb beers from Roosters, Marble, Ballards, Magic Rock, Buxton, Dark Star, The Hop Studio, Sadlers, Great Heck and Black Flag.  All these beers can be enjoyed in one of a number of cosy areas with real fires and chairs you can just sink into.  You can read my review of this pub here.


This would have been a very close call if Doctors Orders in Nottingham had delayed their opening by a couple of weeks.  The Craven Arms is owned by Black Country Ales and I visited this superb traditional backstreet local a few times before completing my work assignment in Straford-on-Avon.  You can read my review of this pub here.

2013 was not a good year for festival visits.  City of Ale is a city-wide beer festival with many of the very best pubs in Norwich taking part.  I may be getting old but this type of festival now appeals to me more than the traditional CAMRA beer festival.  To read my post about my visit to Norwich click here.

This wins due to the excellent Great Sainsburys British Beer Hunt competition.  The opportunity to try twenty bottled ales from some excellent micros for just £1.50 a bottle was an opportunity not to be missed.

I discovered Cotteridge Wines last year and used them for all my bottled beers whilst I was working in the area.  They have an awesome selection of bottled beers from all over the world.

Not having a decent beer shop near to where I live has given me the opportunity to buy beers online for the first time.  I posted a blog post about this experience and you can read it here.  I ended up placing orders with both Ales By Mail and The Beer Hawk.  I was very happy with both but The Beer Hawk wins because they offer free delivery on orders over £50.

'Man Walks Into A Pub' by Pete Brown

If you want to read a highly entertaining history of beer then this is the book for you.

My blog has links to all my favourite bloggers but BeersManchester wins simply because I enjoy the way he describes in detail everything he drinks and the places he drinks them in.

This is the best app I have come across for keeping track of what I drink and places I drink them in.  Plenty of room for comments and everything is easily viewed chronologically and it also allows me to keep track of what my friends are drinking and recommending.

There's only one Nathaniel Southwood.  I had the very great pleasure of meeting up with Nate in Norwich when he took me and my friends on a beer tour of his home town during the Norwich City of Ale event and I'm sure we'll be meeting up for a few beers in 2014 at some point.

I have absolutely no idea who to award this to.

Food and Beer Pairing of the Year

When I finished working in Stratford-on-Avon I took some work colleagues out to my favourite local pub (The Wild Boar in Warwick) followed by a curry.  The Indian restaurant had no drinks license so it was a case of taking your own.  A carryout of the Slaughterhouse Pacific Pale Ale was a perfect match for the meal although to be fair any American Pale Ale or IPA would have gone down well.

That brings 2013 to a close.  An excellent beery year and hopefully 2014 will bring more of the same.