I met Martin, my best mate, drinking buddy and Saints fan, at Southampton University and after graduating he moved back to his home town of Dorchester and I went all over the place.  We joined CAMRA and from the mid 80s we began meeting up annually for the GBBF.  We meet up in Southampton too as often as possible for the football and beers but it is the trips to Dorchester that I particularly enjoy.  Dorchester is a bit of a sleepy town and thirty years ago it was dominated by the Eldridge Pope brewery.  Martin was never a fan of his hometown brewery but I did like a drop of Royal Oak.  This was my first visit to the town since the brewery redevelopment has been uncovered.  Flats, shops and restaurants are now housed within the complex with the usual Costa Coffee, Starbucks, Zizzis and Wagamama already open for business.  It's all a bit generic but the building still looks magnificent. 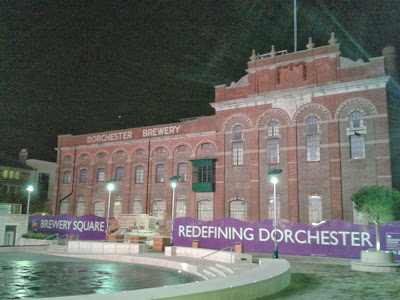 Dorchester has always had a decent pub selection despite a somewhat restricted beer choice at times.  The now closed White Hart was the only outlet of Hall & Woodhouse that I can remember and the remainder were dominated by Eldridge Pope and Devenish.  Things began to improve with the opening of brewpub Tom Browns in 1987 and the pubs we trawled round on Tuesday have been part of the chequered history of Dorchester pubs but which now represent the best available.

We began in Goldies (formerly the Borough Arms) as England were playing Germany and this pub has a TV centred on the far wall of the compact bar area.  This is a former Eldridge Pope pub and Martin tells me it has always been known by both names as long as he can remember.  Martin is a mine of information and tells me a Mr Goldie owned the building back in Edwardian times and despite attempts to rename it the Goldie's name lives on and now the Borough Arms has been pushed aside. 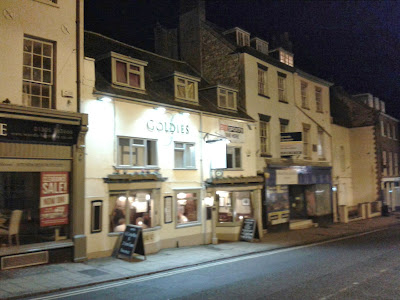 You enter into a comfortable lounge area which is served from the single serving area via a small gap in the wall which serves as the bar.  The handpumps can only be seen from the public bar though which is reached through a gap in the wall to your immediate left.  The public bar has bare stone walls and a nice bay window but it is small with room for no more than 20 to sit in comfortably.  The saloon is larger and used to house a splendid bar billiards table but sadly this is long gone. 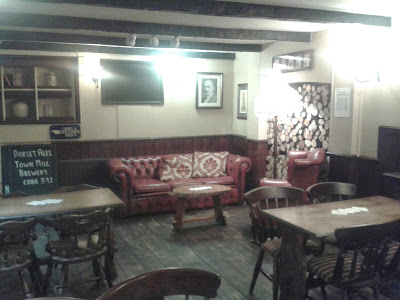 With a full football match to sit through there was time for a relaxing couple of pints here and we both began with the Town Mill Black Ven, a 5.0% ABV porter brewed along the coast at Lyme Regis.  This was a lovely start to the evening.  It was very warming with strong liquorice notes along with some blackcurrant and raisin notes in the mix too.  It was smooth and easy to drink and we both gave this high marks. 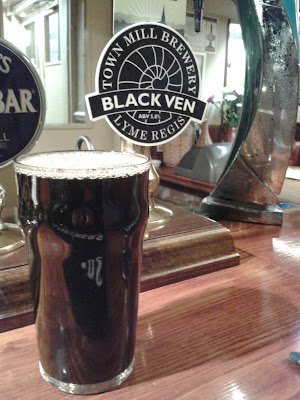 My second pint came from the local Piddle Brewery.  Jimmy Riddle is a 3.7% bitter that was very poor indeed.  A lifeless glass of brown liquid with no sign of any hops.  Flat malty dishwater is the best description I can come up with.  Martin was equally unimpressed.  He did drink it quick it enough however to manage a third pint before the final whistle.  This was a pale golden beer called Sunbeam from Banks's.  I did not sample it but it looked a damn sight better than the Piddle and Martin described it as 'OK'.  A man of few words.  The other beers available were the awful Doom Bar and something equally bland from Ringwood.

It was a short walk down the road to our next port of call, Tom Browns.  This pub was called The Chequers when it closed in the mid 1970s.  It was closed for over a year before a Mr Finch bought it and it was reopened as The Sandpiper.  This obviously didn't work too well and he changed it into a wine bar.  This again did not last and in 1987 he turned it into a brewpub.  The pub was renamed Tom Browns and the beers were brewed under the Goldfinch name.  It instantly proved to be a success and when in Dorchester it is normally my first port of call.  Following the sad death of Mr Finch a few years ago the pub was snapped up by Dorset Brewing Company as their brewery tap and the Goldfinch beers are now brewed offsite at DBC's nearby brewery on the outskirts of town. 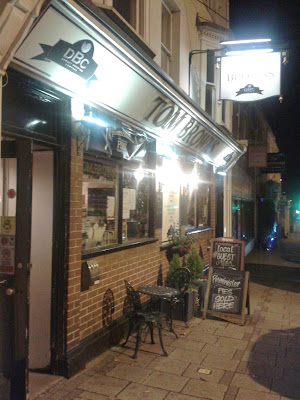 Tom Browns features in my top ten of very special pubs and I have been enjoying coming here for over twenty years now.  For Martin it is one of his two regular haunts and he always has the Tom Browns, a 4.0% traditional bitter.  I normally go for the Midnight Blinder unless they have a guest beer I fancy trying.  Tonight I went for the usual only to find it has now become a stout.  When did that happen?  The strength of the beer remains the same at 5.0% ABV.  I certainly wasn't complaining though once I tasted it as it is a cracking stout.  Superbly smooth, full bodied and well balanced with some subtle bitter coffee notes and a malty biscuity base.  Superb. 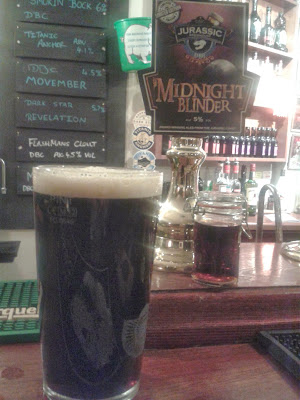 The pub itself really hasn't changed a great deal in 20+ years.  It has a tasteful basic decor in the large single bar area.  To the back there is a skittle alley and at the rear there is apparently a lovely garden that I have never seen.  One notable item missing this time is the jukebox.  Where has it gone?  Martin informs me it is now in the skittle alley which is not much use.  Bring it back into the bar !! 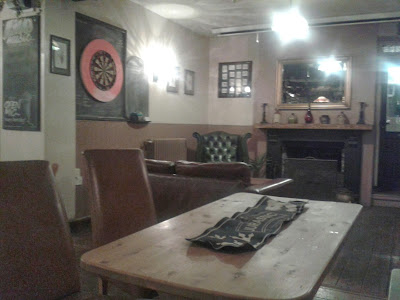 The walk to the third pub was equally short.  Back towards Goldies and across the road The Blue Raddle sits just off the main road.  This is yet another pub with a chequered history and one which has had its share of closures and former names.  Originally The Dolphin it was shut for a couple of years before reopening as The Gun Room.  This changed to the Country Gentleman before changing once again to The Blue Raddle in the 90s.  Since then it has always been a pub worth visiting.

You enter into a small comfortable lounge and the bar runs down the right hand side of the pub which serves all the various seating areas which are separated by wooden panelling creating a nice cosy feel.  There is a further separate room towards the back so it is deceptively spacious overall.  It always seems to be bustling and very friendly when I have visited and this evening was no exception.  In the past I have eaten here and the food is all locally sourced and cooked to order and quite superb. 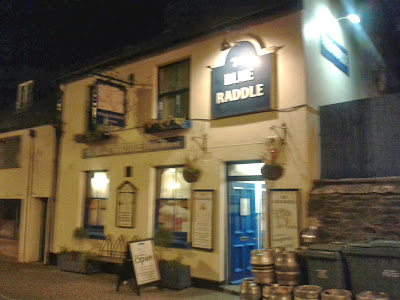 The beer selection is always interesting and mainly sourced from the West Country.  They certainly were this evening.  There were beers from St Austell, Otter and I think I spotted Doom Bar in there too sadly.  There were a couple of beers from Bath Ales as well as Branoc (3.8% ABV) from Devon brewer Branscombe Vale.  I chose the latter as it was new to me and I was delighted to see it served in a branded glass.  The beer itself initially tasted quite bland but that was probably because it was coming after the Midnight Blinder.  There was a distinct caramel maltiness with some sweet fruits to it and finally I was able to detect a pleasing bitter finish.  Overall quite a pleasant traditional English bitter. 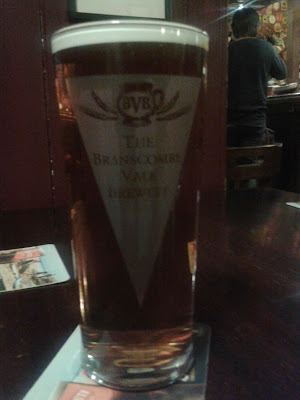 With ten minutes to go before last orders we were deliberating where to finish up when DBC Ales tweeted me suggesting we went back to Tom Browns for a final beer.  What a good idea.  The plan was to end up at Martin's other local, The Bakers Arms.  This is a former Eldridge Pope house dominated by beers from the Marstons stable and coupled with the fact it was a decent walk and not guaranteed to be open the prospect of another beer at 'Toms' was too enticing.

For our second visit I introduced Martin to the wonders of Dark Star as they had the wonderful Revelation (5.7% ABV) as a guest.  How is it I ask?  'OK' came the reply.  He needs to get out more!!  I went for a DBC special called Smokin' Bock.  This is a 6.0% ABV beer that is absolutely superb.  There were lots of rich fruit flavours with some orange sweetness giving a very slight sour taste to it but the malty base gave it a well bodied and warming feeling to it.  A perfect end to another excellent evening in Dorchester so time to raise a glass to Martin for yet again showing me round the best that Dorchester has to offer.  Cheers. 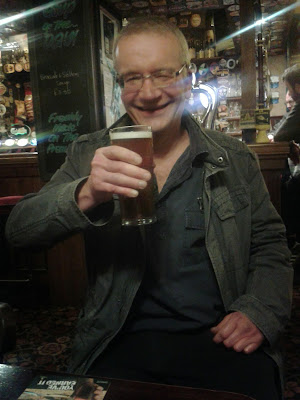