A Visit to Langham Brewery

Two beers achieved my top award on my recent pub trail around Surrey and Hampshire.  The first of these beers was the Langham Arapaho (4.9% ABV), a superb American Pale Ale full of hoppy goodness.  Following on from my praise for this fantastic beer, the lovely people at Langham Brewery told me to visit them some time.  How could I refuse such an offer?

The brewery is based in an attractive converted barn close to the West Sussex village of Lodsworth just off the A272 between the towns of Petworth and Midhurst.  Owners James and Lesley were not around but I was well looked after by assistant brewer Saulo and Scott.  Saulo originates from Portugal and came to the world of brewing via semi-professional football and clearly loves his new career (who wouldn't?).  He came to England, where he has represented local non-league sides Farnborough and Bognor Regis,  after a spell in the Belgian second division.
The brewery is a refurbished 10 barrel steam heated plant which was acquired from Wickwar Brewery in 2005. Saulo was happy to show me around and let me see where the brewing takes place while Scott brought me a few of their beers to sample.  Each brew is kicked off in Martha the mash tun (yes they have names for every vessel) and from here it is transferred to Cathy the copper where the hops will be added whilst the wort is boiled.  The wort is then cooled to 20 degrees as it is transferred into one of the four fermenters (Fanny, Fiona, Freda and Fatima).  A fifth fermenter will soon be added but no name has been decided for it yet!

Following 3-4 days of fermentation the beer is left to cool to about 12 degrees and it is then ready for racking into one of the many steel casks on view.  It is good to see the brewery using 36 pint casks alongside the more common 72 pint.  This must be very useful for pubs with a lower turnover which can probably occur in some of the local village pubs in what is essentially a sparsely populated area.

The first beer I was offered to try was Sundowner, a 4.2% ABV golden ale.  I had tried the bottled version of this beer last year and I must confess to finding it a little ordinary.  The cask version however is quite superb.  It has a much more fruity hoppy taste to it from what I remember and there is a lovely bitterness throughout.  The finish is smooth and beautifully refreshing.

The second sample is their bestselling Hip Hop (4.0% ABV).  This is a classic blonde beer full of citrussy and floral hops and it was one I enjoyed on the pub trail.  It has won several CAMRA awards and it is much loved by myself.  Was it better than the Sundowner today though?  That's a hard one as I thought both of them were exceptional today so I will call it a tie.

Halfway to Heaven (3.5% ABV) was the final beer I sampled.  This classic chestnut coloured session bitter uses traditional British hops.  There is a lovely biscuity maltiness to it before it gives way to a pleasing bitter finish.  There is nothing to dislike about this beer at all.  I prefer the more extreme hoppiness of the previous two beers perhaps but this is a tasty lower strength beer I would be happy to try again.

Their regular range is completed with the Best Bitter (4.5% ABV) and the LSD (5.2% ABV).  The magnificent Arapaho is a recent addition and I hope this becomes a regular.  In the fermenting vessel was the first batch of Black Swallow, a 6.0% ABV black IPA.  Saulo tells me this is primarily brewed in the winter and one whiff from the batch in the fermenter tells me it is a beer I must try.  It smells divine!  I will be hunting it down in a local pub during October and I will report back then!


Langham Brewery is now well established.  There may now be in excess of forty breweries in Sussex but back in 2005 they were less than twenty and West Sussex particularly was still recovering from the loss of the large regional brewer King & Barnes.  If you haven't tried any of their beers yet then you really need to find them.  Next month (Sunday October 20th), they will be opening their doors to host the 6th annual Langham Brewing Conkers Championship which would be a perfect opportunity to sample the beers and meet the team there.

Finally a big thank you to Saulo and Scott.  They were more than happy to chat about their beers which they obviously love and I was sent away with a couple of bottles and a glass.  The Hip Hop is a beer I have previously reviewed of course but the LSD (Langham Special Draught) at 5.2% ABV was one I was particularly looking forward to trying.  It is a lovely copper coloured beer with sweetness from the malts being the dominant force.  There was a little richness to it making it quite warming as it went down with a spicy bite to it in the dry finish.  A lovely beer. 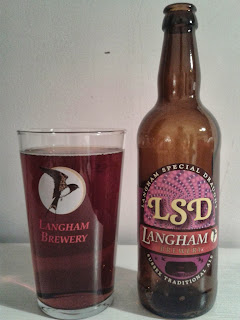 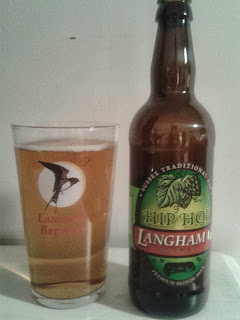