A Perfect Evening at The Bull Inn, Chichester

Having accidentally deleted this post my apologies if you are reading this again and you don't think it reads the same.  That's because it doesn't.  I'm having to rewrite the original due to problems with the Blogger App deleting things it isn't supposed to.  Anyway, last week I went to my local CAMRA monthly meeting at this excellent town centre pub (yes I know Chichester is a city but in terms of size it's a town) and it turned out to be a perfect evening of drinking.

The Bull Inn has two entrances at the front and both lead into the single wraparound bar.  There is a covered outdoor area that connects to a meeting room at the back.  The walls of the large bar area are adorned with loads of pump clips of beers that have been served at some point.  The ceiling of the bar to the left as you enter has also been decorated with an enormous collection of potato mashers for some strange reason.  They would no doubt come in handy if you request the sausage and mash which come with the famous local O'Hagans sausages.  Try them some time.  They are amazing. 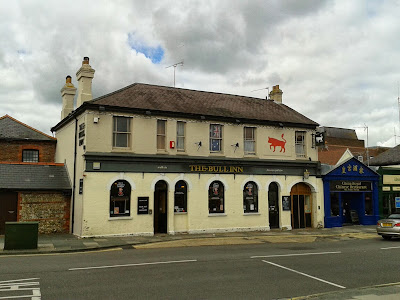 The beer selection at The Bull Inn is usually impressive and constantly changing.  The evidence of this is all around you and tonight the selection looked particularly interesting with three breweries which I had never even heard of.  IPAs and pale ales were the order of the day ranging in strength from 3.5% ABV to 4.6% ABV so it was a case of working my way through them starting with the lowest strength.

My first pint was the Surfbum IPA (3.5% ABV) from the Rebel Brewery of Cornwall.  Rebel began brewing in 2011 and the Surfbum IPA is a blonde beer with a very strong citrussy aroma.  The taste was strong with very sharp grapefruit and lemon notes totally dominating the flavour.  The aftertaste was actually a little sweet and this was too much for some of my CAMRA colleagues but I liked it a lot and I gave it a score of 8/10.

The second beer was being raved about by all.  The Liverpool Organic Brewery began brewing in 2009 and the beer on offer was their Liverpool Pale Ale (4.0% ABV).  This was a light golden colour so darker than the Surfbum.  The aroma was not particularly strong and the taste was a little earthy, a little citrussy and a little spicy giving a lovely dry bitterness overall.  The finish was incredibly smooth.  A tremendous beer worthy of a score of 9/10.

Finally I had a pint of Sidewinder, an American Pale Ale (4.6% ABV) from the Ordnance City brewery based in Somerset.  Ordnance City only began brewing last year and on this evidence I will need to find more of their beers.  More golden than the previous two it had a lovely balance of citrussy and earthy hops with a powerful hoppy aroma.  It really is a stunning beer and it is my first 10/10 beer for quite some time.

It is such a rare occurrence that I come across three superb beers from three relatively new breweries in the same pub on the same evening.  The Bull Inn certainly excelled themselves with their beer choices and all three beers were fantastic and in perfect condition.  It was indeed a perfect evening.
Posted by Unknown at 15:03