﻿My beer cupboard was empty and with no local bottle shop I decided to give the Marks and Spencer range of bottled beers a try.  It is a few years I think since M&S began selling their own branded range of beers that have been brewed by regional breweries from all over the country.  This range has grown substantially since the original launch which can only mean they have proved popular.  My review consists of a selection of three IPAs and three golden ales.

Oakham Ales Citra is a fantastic beer.  The cask version is a 4.2% ABV brew and in bottles it is slightly stronger at 4.6% ABV.  This version produced for M&S is stronger still at 4.9% ABV but I was expecting it to be very similar to their own branded version.  I wasn't disappointed.  The unbeatable citra taste was prevalent throughout but there was no harsh bitterness with it which my wife was delighted about.  She is not a fan of the hoppy citra taste normally but she always gives them a try and her comment 'this is the best Citra I've tasted' is high praise indeed.  It is quite some time since I've tried the Oakham version, something I must put right soon, but I found this beer as good as the original.  A little more rounded perhaps and the extra strength is noticeable.  I expected to award this beer 10/10 and indeed I do.  Top marks. 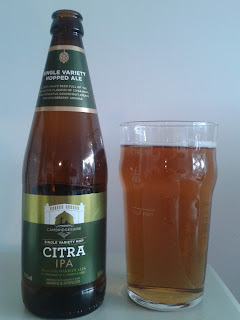 I'm not sure what I was expecting with this beer.  I love the malty taste of Adnams beers so would this be something hoppier?  It had a deep golden colour and a strong fruity aroma.  It had quite a rich taste with lots of complex sweet fruits coming through.  It reminded me a little of the Youngs Special London Ale you can get in bottles (6.4% ABV) and which I love.  I'm not quite sure about this being the perfect Summer drink.  I think it would be ideal in the Autumn to be honest when you have a need for something a bit stronger to lead you into the dark Winter months.  It is certainly an interesting beer and one I would like to drink more of (as with all Adnams beers!!).  Score 8/10. 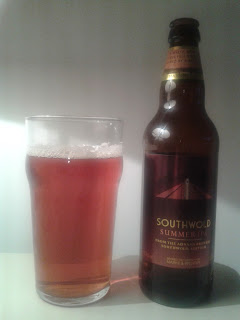 
Oh dear.  This is not good at all.  One reason I like to give my wife a taste of all my bottled beers is because she has no preconceptions about them.  She has a taste for beer, especially the stronger, darker and maltier ones.  However, whereas I may have some expectation of whether I might like a beer by either the style of beer or by who brews it, Carolyn will not.  This is partly because I don't tell her what it is until after she has tried it and also because the name of the brewery will probably mean nothing to her.  When I handed this beer to her she just went 'Urgh that's tasteless'.  Spot on. Actually there was some fruitiness to it and a somewhat harsh bitter aftertaste once you found your way down the glass a little but none of it was pleasant.  I cannot believe this is 5.5% ABV.  Very disappointing and a score of 3/10. 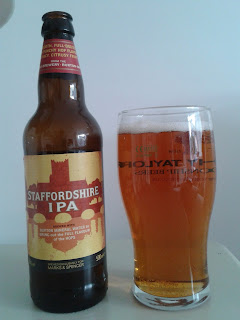 This beer is very interesting.  It is a single hopped variety and I must confess to not knowing too much about the Sovereign hop.  I have discovered that it is British and was released as recently as 2006.  The beer has a distinctive fruity aroma which carries into the taste but there are also floral and earthy notes in there too with some sourness.  My wife liked it and we both agreed it had some gooseberry notes giving the tart tang to it.  Elgoods beers rarely let me down and this is a definite hit and I give it a rating of 8/10. 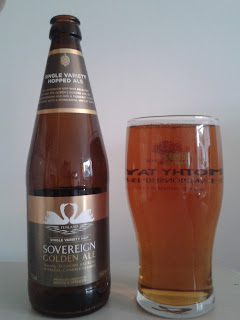 Hepworths of Horsham began brewing in 2000 following the demise of King & Barnes.  Andy Hepworth was the former K&B head brewer and has continued brewing in the town with great success.  This particular beer is described as a traditional Sussex bitter brewed with local barley and hops.  It is certainly a lovely golden colour with a nice somewhat biscuity aroma.  The initial taste is quite mellow with some floral notes.  The bitterness is quite restrained and the finish is actually a little fruity.  King & Barnes Old and Festive were both particular favourites of mine but their Sussex Bitter was quite bland.  This is better and quite drinkable.  Score 6/10. 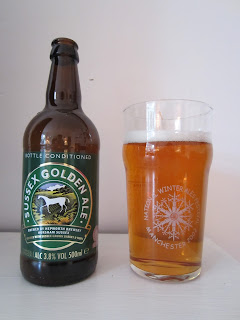 This is another single hopped beer using the classic German Hallertau hop. The beer has a lovely pale colour to it making it more blonde than golden.  The aroma is a little earthy and the initial taste is both earthy and lemony.  There is a little sweetness to it and very little bittereness.  The finish is quite dry and earthy.  There is absolutely nothing to dislike about it.  A refreshing beer perfect for Summer.  I give it a score of 7/10. 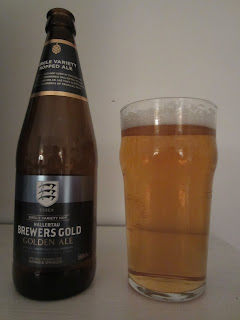 This trip to M&S has unearthed some lovely beers.  They have certainly found a winning formula by approaching some of the best independent breweries from all over the UK to produce a range of regional beers.  Only one of these six beers disappointed and I would be happy to try the remaining five again.  If you are looking for an alternative to standard supermarket bottled ales they are certainly worth checking out and if, like me, you live in an area devoid of specialist bottle shops it is probably your best option at finding something a little bit different.

Happy drinking.
Posted by Unknown at 22:36